Images Of Russia, A Photography Tour

Russia is an otherworldly destination unlike any other. It has the most beautiful metro stations in the world and opulent royal palaces that could have come straight out of a fairytale. On this exclusive small group escorted tour, you’ll get the time to hone your photography skills and capture Russia’s most famous sights under the guidance and expertise of award-winning travel photographer, Neil Buchan-Grant.

Day 1: UK to Moscow Arrive in Moscow and start your Russian tour with a welcome dinner. Tuck into classic regional dishes as you get a taste of Russia in a kitsch restaurant with waiters in traditional dress and folk décor. After dinner, have a short tour of Moscow at night to visit some of its most iconic spaces. Stay: Kadashevskaya Hotel (or similar). D.

Day 2: Moscow Start your first full day in Moscow with Neil who’ll brief you on the day ahead and answer any questions you have. A special feature of the day is the model who’ll be joining you for the chance to capture some portrait photography in some wonderful scenic settings. Set off around 9.30am on your city tour, where you’ll have plenty of opportunities to capture picturesque corners of Moscow like its famously grand metro stations. Elaborately styled, they’re known as the ‘palaces of the people’ and are great places to snap locals in beautiful surroundings. Visit the golden-domed Cathedral of Christ the Saviour (photography not permitted) and visit Gorky Park, officially known as The Central Park of Rest and Culture. It’s a huge open space for leisure where you can take the opportunity to find the perfect angles as you snap street artists and quirky monuments. Visit the Tsaritsyno Palace in the afternoon, where you’ll have plenty of space in the vast grounds to get the perfect people-free shot. Stay: Kadashevskaya Hotel (or similar). B.

Day 3: Moscow Travel out to Sergiyev Posad, a city north of Moscow that’s the centre of the Russian Orthodox Church. Photograph the vivid blue and gold onion domes of Trinity Lavra of St. Sergius and have lunch at a Russian restaurant set in a 19th-Century frescoed refectory. After a relaxed afternoon, return to Moscow for one of the highlights of this tour. Join Neil for an exclusive photoshoot at Red Square as dusk (subject to confirmation), and take photos of iconic sites like Saint Basil’s Cathedral and the Kremlin in the autumn light. Return to your hotel for free time this evening. Stay: Kadashevskaya Hotel (or similar). B, L.

Day 4: Moscow to St. Petersburg Check out of your hotel and head to the Kremlin for a guided tour. See relics from the days of the Russian Tsars and visit cathedrals on Cathedral Square (time permitting). Depart for the train station for your journey in business class through the countryside to St. Petersburg (approx. 4 hours). Have lunch on board and make the most of the time to have a one-to-one session with Neil for photography advice. Arrive in St. Petersburg and check in to your central hotel where you’ll be welcomed with a drink. Stay: Demetra Art Hotel (or similar). B, L.

Day 5: St. Petersburg Begin with a morning workshop with Neil before heading out on a guided tour of St. Petersburg by coach and by foot. Today you’ll get time to explore the former imperial capital as you visit landmarks including the resplendent Cathedral Square and Winter Palace, the imposing statue of the Bronze Horseman and the Church on the Spilled Blood. Stop for lunch by the River Neva before a tour of Peter and Paul Fortress where you can photograph some of the oldest buildings in the city. Designed to protect his newly established city of St. Petersburg in 1703, Peter the Great’s fortress now houses the remains of the last of the royal Romanov family in its cathedral. Other buildings include the St. Peterburg’s Mint – where coins and medals are still produced today – and the maximum-security prison Alexeevskiy Ravelin, where novelist Fyodor Dostoyevsky’s was imprisoned. Return to your hotel for an evening at leisure. Stay: Demetra Art Hotel (or similar). B, L.

Day 6: St. Petersburg Spend your morning at the world-class Hermitage Museum , where you’ll arrive at around 9.30am to beat most of the crowds. Founded by Catherine the Great, the museum’s collection of paintings and monuments is one of the largest in the world with over 2.7 million items. See the works of da Vinci, Michelangelo and Picasso at your own pace on this morning of culture before an independent lunch. The second half of the day is dedicated to one Russia’s oldest ballet houses, the Mikhailovsky Theatre. Here, you’ll have an exclusive ballet photoshoot in the velveted theatre or ballet studio (dependent on theatre rehearsals). Stay: Demetra Art Hotel (or similar). B.

Day 7: St. Petersburg See one of Russia’s most regal spectacles in Russia as you drive to the small town of Pushkin to visit the captivating Catherine Palace. Redesigned to rival the Palace of Versailles, this lavish Rococo-style building exudes splendour from its blue, white and gold façade. Named after Catherine I, the palace’s standout feature is the Amber Room, which is filled with an amber mosaic created using six tonnes of the gemstone. After a traditional lunch accompanied by folk music and vodka tasting, move on to the butter-yellow Pavlovsk Palace near Puskhin. Formerly the home of Paul I, the palace was almost destroyed in World War II and has been restored to its original plans. The palace's collection includes original relics that were smuggled out and hidden by curators during the war. Return to St. Petersburg for free time this evening. Stay: Demetra Art Hotel (or similar). B, L.

Day 8: St. Petersburg You’ll have the chance to explore St. Petersburg on your own this morning. Visit the main street, Nevsky Prospekt, and browse its souvenir shops, high fashion boutiques and cafes. Transfer to the airport for your return flight to the UK. B.

This tour is suitable for all levels of abilities. Whether you're a beginner with a smartphone or an experienced photographer with a top-of-the-range DSLR camera, you'll be equipped with all the professional tips you need to know to enhance you photography skills and take masterpieces of your own. This is an amazing itinerary for those with a love for travel and photography.

• All departures are guaranteed
• For guests over 16 (unless travelling on a private journey)
• Average group size of 10 guests
• A maximum of 18 guests.

• Once booked, Neil will contact you to answer any questions, and offer pre-departure advice

• Photography is not allowed in some palaces and cathedrals

• Heads must be covered when visiting cathedrals

• The Red Square photoshoot on Day 3 is subject to cancellation at short notice. In the event of cancellation, the photoshoot at dusk will be at an alternative location (e.g. Gorky Park).

We’ve chosen hotels close to main attractions and restaurants so you can make the most of your free time in each city. Kadashevskaya Hotel is located just 15 minutes from Red Square while in St. Petersburg, the early 20th-Century Demetra Art Hotel offers a modern twist on the city’s regal charm.

Neil Buchan-Grant is an award-winning photographer with over 30 years’ experience of landscape and travel photography. Neil’s experience in travel and street portraiture, easy-going and friendly style of tuition and way of imparting his knowledge will help you make the most of Russia’s spectacular visual possibilities. Whether you are a beginner or just looking to build on your existing skills, Neil will be available to guide you with advice and offer feedback as you take your own photographs. Through workshops and post-sightseeing review sessions, he’ll tailor his advice and tuition to suit you and help you capture images to the best of your ability. 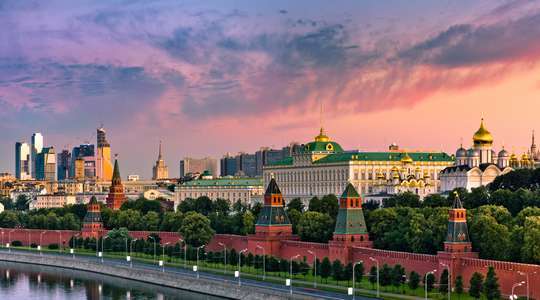 A blend of rich history and fascinating culture awaits in Russia – a truly unique country unlike any other you’ll ever visit. Sample vodka at a dedicated museum, admire the colourful onion domes on top of cathedrals and wander around the unbelievable splendour of Catherine Palace in an utterly absorbing journey between Russia’s two most influential cities.