10 temples in Asia you won’t know about

From crumbling ruins to glittering spires, Asia's temples span centuries and are works of art in their own right but some aren’t as well-known as others…

We’ve spoken to our Travel Experts who’ve told us their favourite hidden temples across Asia, so you can go forth and discover their unique treasures:

At the foot of Mount Hengshan, hangs a curious monastery named Xuankong Si – one of the most impressive yet hidden temples in China. More than 50 metres above the ground on the west cliff of Jinxia Gorge, it’s stood strong for many years by using a specific mechanical theory. A crossbeam framework has been inserted half into the cliff as a foundation, which means the cliff has become its support, making it a Chinese architectural wonder. This temple is also special as it includes Buddhism, Taoism and Confucianism at its heart, with sculptures of each cultural icon stood inside. 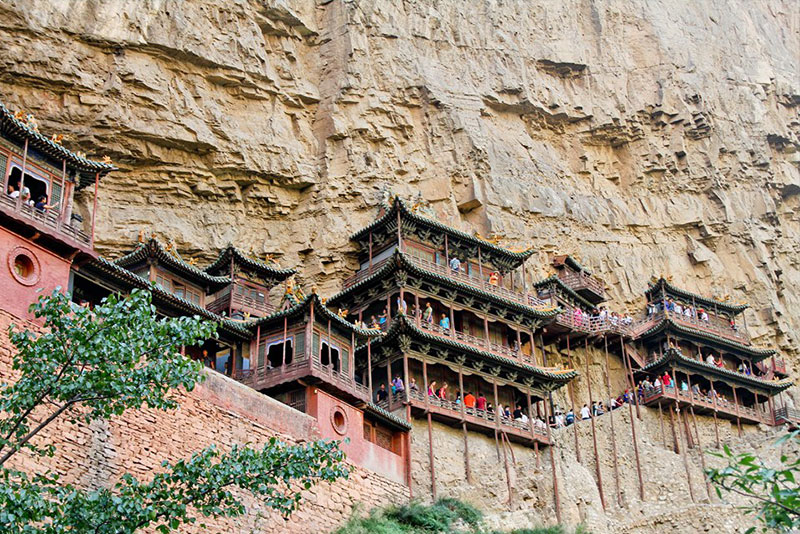 With awe-inspiring views of the ocean and completely made out of wood, the Sanctuary of Truth in Pattaya is an incredible feat of architecture. Part artwork, part religious shrine and part cultural monument, it has four wings dedicated to Chinese, Thai, Khmer and Indian unique religious iconography. Each icon has been hand carved to perfection. Built and designed by a Thai millionaire who has spent his fortune on preserving ancient cities, he spent his fortune on this temple to preserve ancient wood-working skills – it’s been under construction since 1981 and still being worked on today. 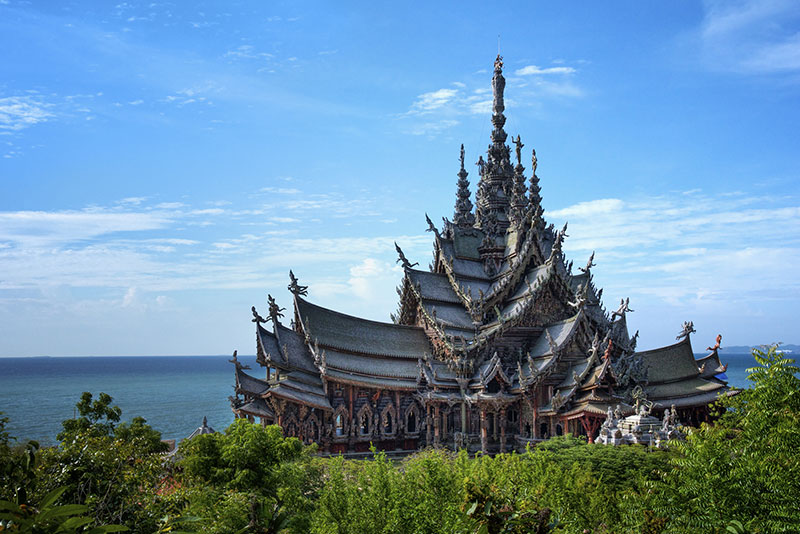 One of the most beautiful Hindu temples in the world, Prambanan Temple is the biggest complex in Java, with three main temples in all dedicated great Hindu deities – Shiva, Vishnu and Brahma. Built by Rakai Pikatan, a Hindu Prince, the archaeological park contains over 250 temples, both large and small, which later was expanded by thousands more, albeit not of the same size. The park and its temples were used for religious sacrifices and ceremonies by the Kingdom of Mataram until a major earthquake shook the entire area in the 16th century, leaving the majority of them in ruins. 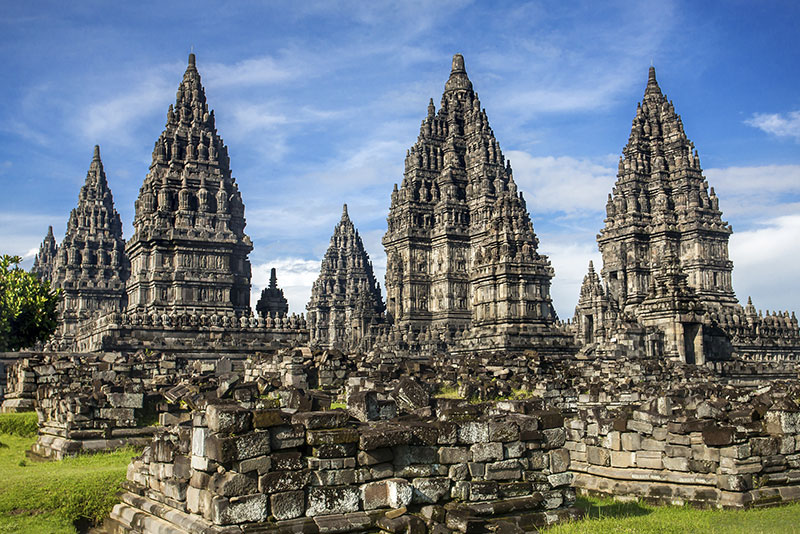 In the Higashiyama district of Kyoto, sits the vast temple complex of Chion-in Temple, otherwise known as the Vatican of Pure Land Buddhism. You’ll soon discover walking around this complex that everything is built on a larger scale, from the san-mon gate at its entrance to the compound itself, you’ll feel miniscule in comparison. As you enter, cross the main plaza and you’ll enter the main hall, known as the Goei-do, where you’ll be able to witness Priests chanting throughout the day. The other highlights of your visit should be the image of Amida Buddha and the temple’s 70-ton bell, rung every New Year’s Eve. 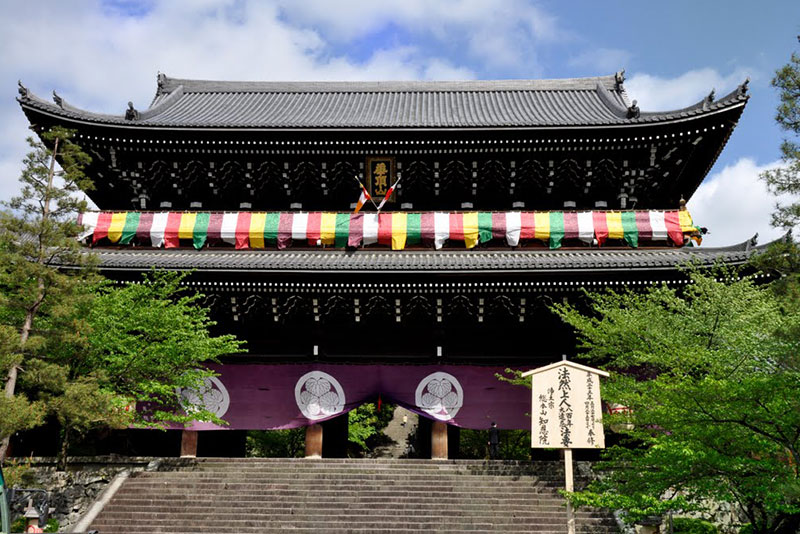 On your trip to Angkor, don’t miss the ‘off the beaten track’ temple of Banteay Srei, a beautiful Hindu temple complex built in the 10th century. Built in deep red sandstone, Banteay Srei, also known as the ‘Citadel of Women’, has intricate carvings on all of its central buildings depicting scenes from ancient Hindu tales. Referred to as the jewel in the crown of Angkorian art, the temple is dedicated to a single deity, Shiva. Wander the complex itself and you’ll find the lavishly decorated libraries, with three central towers, each decorated with 3d carvings of male and female divinities. 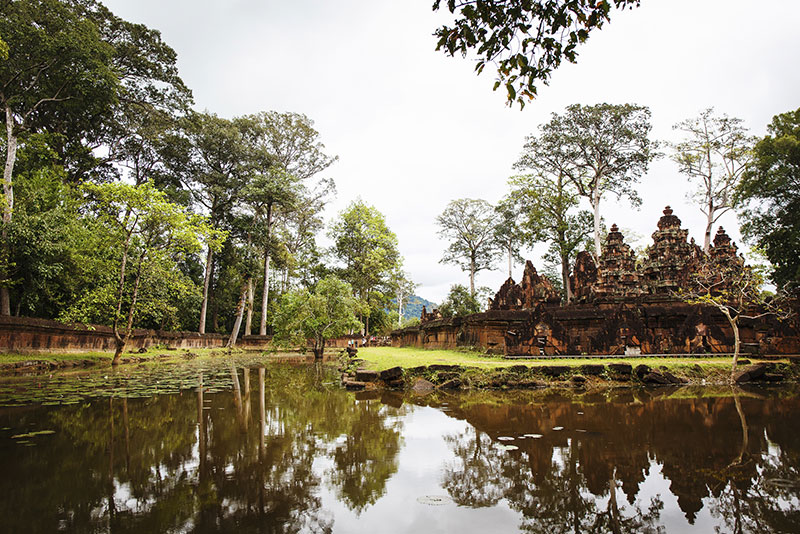 Undoubtedly the most well-known on this list would be Paro Taktstang, also known as the Tiger’s Nest Monastery. Clinging to a cliff, 3120 metres above sea level, you’ll find a complex of 12 temples and a main shrine with its prayer wheel – rotated at 4am each day by monks to mark the beginning of each new day. It’s these same monks that spend at least 3 years at this temple meditating. However, the hidden gem in this temple is the hall of a Thousand Buddhas, which holds a large statue of a tiger. At this temple in particular, the tiger is respected as the symbol of Paro Taktsang because according to legend, the location of the Monastery was chosen by a tigress. The tigress brought the founder of Bhutan’s Buddhism guru, Padmasmabhava, on her back. 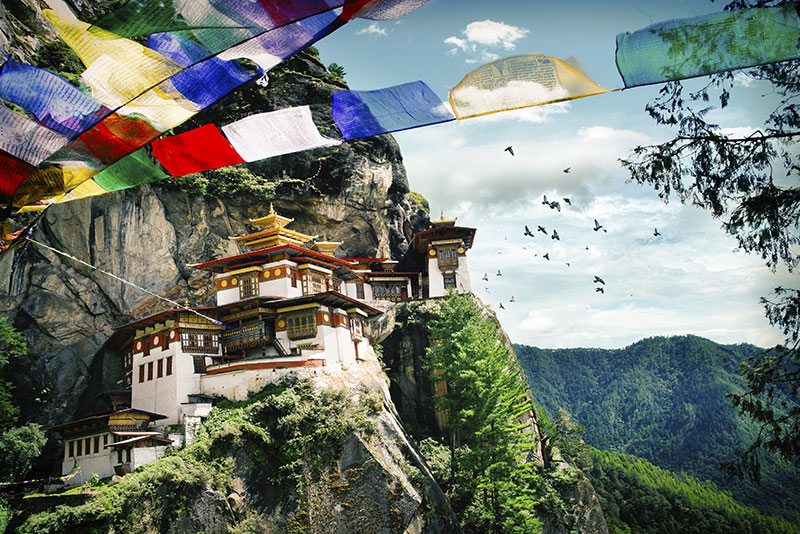 One of the tallest temples in Burma, Thatbyinnyu Temple sits proud at just over 60 metres visible across the Bagan plains. One of the first two storey temples built in Bagan, this formidable structure also has a terrace on each storey and stoupas on each of its four corners – representing traditional Burmese architecture. On top of the temple’s base, you’ll spot the principal Buddha image enshrined in a cella, as well as the gilded hti, a spire found on most Burmese temples shaped like an umbrella. As you wander the temple’s grounds, you’ll also spot statues of Nat spirits, as well as the nearby Tally Pagoda made up of all the redundant materials not used for the Thatbyinnyu Temple itself. 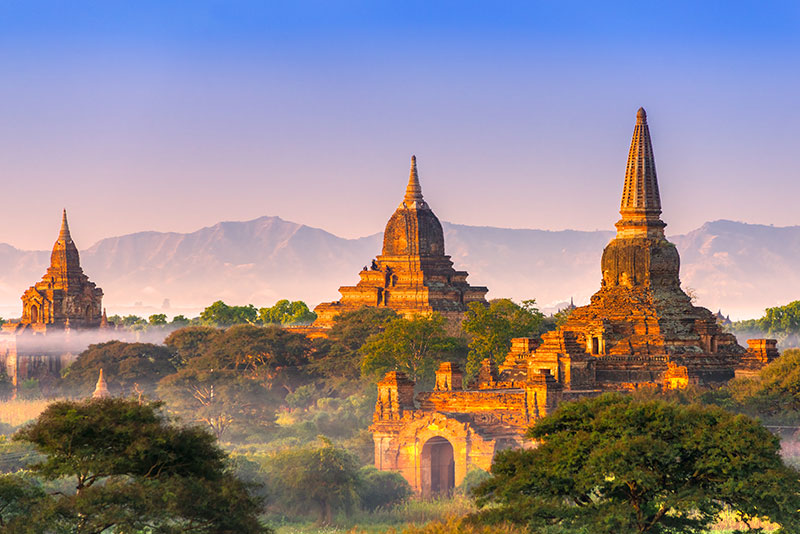 Built in 1891, Kek Lok Si Temple in Penang is one of the largest but also one of the most vibrant temples in the whole of Asia. On its inside and outside, you’ll find millions of Buddha icons each hand carved or sculpted. Walk its illustrious temple halls, pagodas and archways to see the intricate detail that has gone into each one. A centre for Chinese culture and Buddhist teachings, you’ll not only be able to marvel at this temple’s architecture but also observe the daily routines of local monks and worshippers. 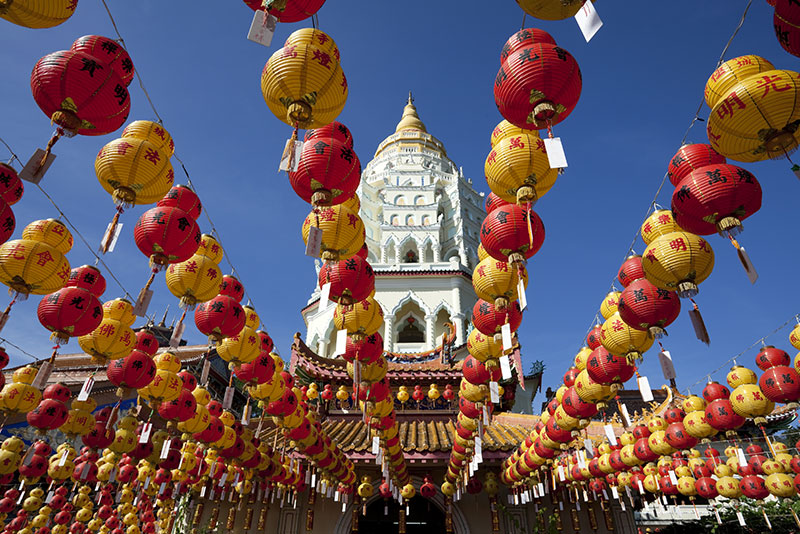 Located on the western edge of Bedulu Village, near Ubud, you’ll discover a relic-filled courtyard, rock-wall carvings, a meditational cave and bathing pools at Goa Gajah, otherwise known as the Elephant Cave. Dating back to the 11th century, this complex was used as a place of calm and prayers, decorated with fountains and sculptures reflecting Hindu influencers. The cave contains three stone idols wrapped in red and yellow cloths; hidden in a sacred hillside. Sources state that the elephant name came from one of these stone idols depicting the Hindu lord, Ganesh, who is characterised by an elephant’s head. 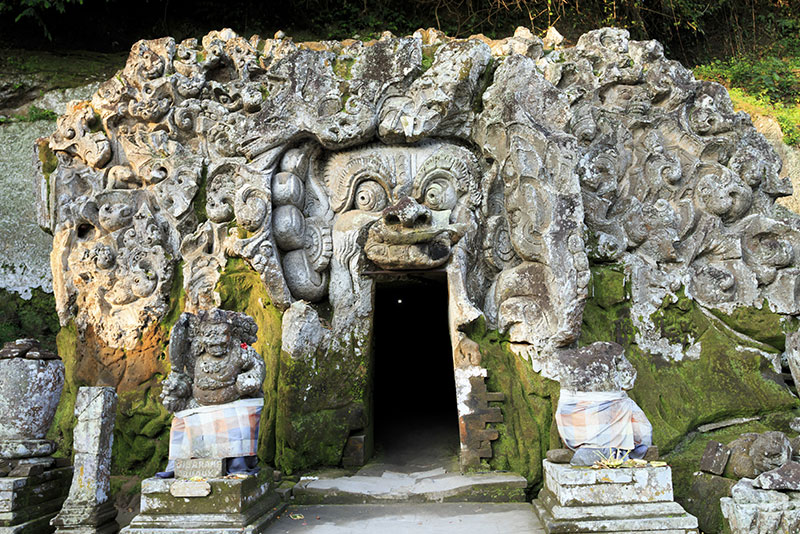 On Singapore’s Ceylon Road, Sri Senpaga Vinayagar Temple was built mid-19th century by Ceylonese Tamils from Sri Lanka. The second-oldest Hindu temple in Singapore, it was designed in the architectural style of the Chola dynasty known for their colourful and intricately carved temples in India. Highlights to spot are the main tower entrance, the shrine of Lord Ganesha and the temple roof, with images of deities and dragons, as well as the temple’s own perfume garden, growing Jasmine, Roses, Bananas and Coconuts. 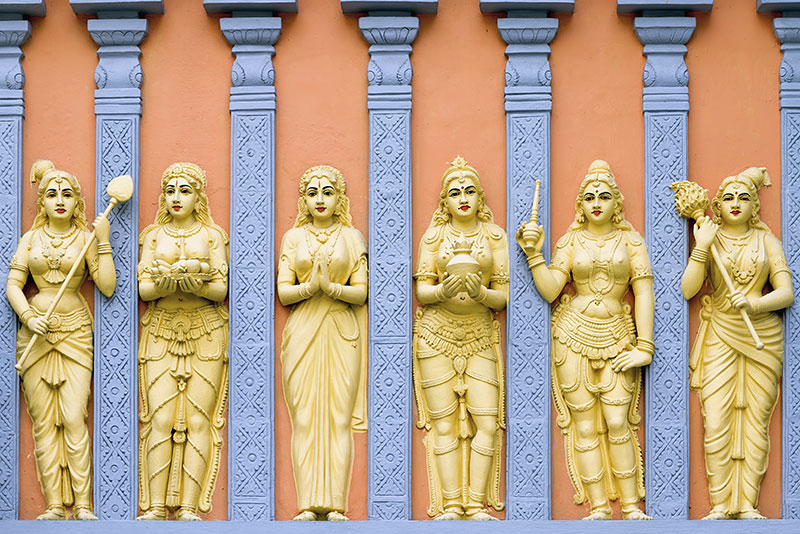 If you’d like to explore Asia, from China to Thailand, uncovering hidden gems as you go, then you’ll need to know which countries are available to you.