7 of India’s most spectacular hotels

Colour-splashed cities, iconic monuments and once-in-a-lifetime wildlife experiences – India is a total sensory explosion. And this charming country features some of the world’s most unbelievable hotels.

We know where to stay for the best views of the Taj Mahal from your room, or if a safari holiday is what you’re after, one of our favourite tented lodges sits on the edge of a famous tiger reserve. We’ve handpicked seven of the country’s most amazing hotels to share with you. 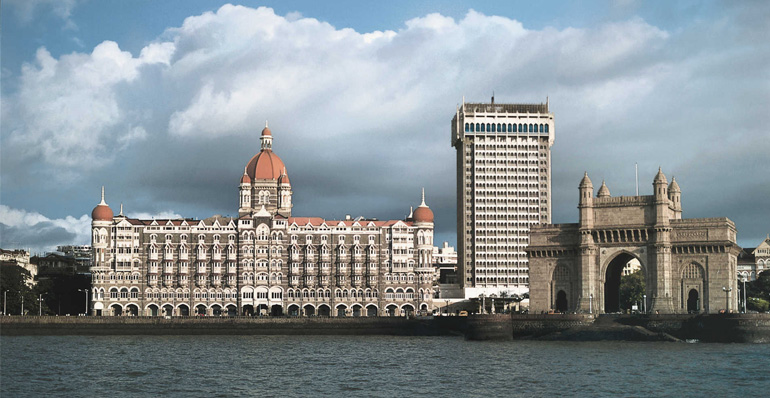 As the hub of India’s entertainment and financial industries, Mumbai is such a thrill. It’s bursting with people, history and has an electric energy. The city is also the birthplace of Bollywood and you can find some of India's greatest restaurants here.

When you first lay eyes on the Taj Mahal Palace & Tower, you immediately get why it’s been a favourite choice for royals and celebrities since its opening in 1903. It’s an architectural masterpiece. Step inside and admire opulent décor and richly-coloured rooms, where chandeliers hang from high ceilings and plush furniture creates a cosy atmosphere. The hotel sits on Mumbai's animated waterfront overlooking the Gateway of India. It has a luxurious spa, renowned restaurants and extravagant rooms – with some even including 24-hour butler service.

Pastel-shaded shops frame rustic narrow lanes, and scattered across the city are enchanting palaces, temples and bazaars. Udaipur’s paths are less trodden than some of India’s most popular cities, like Delhi or Jaipur, and it’s also smaller, which makes exploring this fascinating metropolis a more intimate experience.

Resting above the inky-blue Lake Pichola, you’ll find the ornate marble walls of Taj Lake Palace. It’s one of the most romantic hotels in the world and is so distinctive – you can see why it was chosen as the setting of the secret lair in James Bond movie, Octopussy. A peaceful boat ride across the lake will transport you to this fairytale island, which is entirely exclusive to hotel guests. You can’t beat the service; the staff are so welcoming and their personalised approach makes you feel like you’re the only guest staying here. For dinner, restaurant Neel Kamal is such a treat. Dig into fragrant Rajasthani dishes cooked in wood-fired stoves and served on Versace dinnerware, or head to the hotel’s magical open-air rooftop restaurant for mesmerising views of the lake and Udaipur’s City Palace. At night, watch colourfully-dressed Indian dancers swirl across the courtyard. 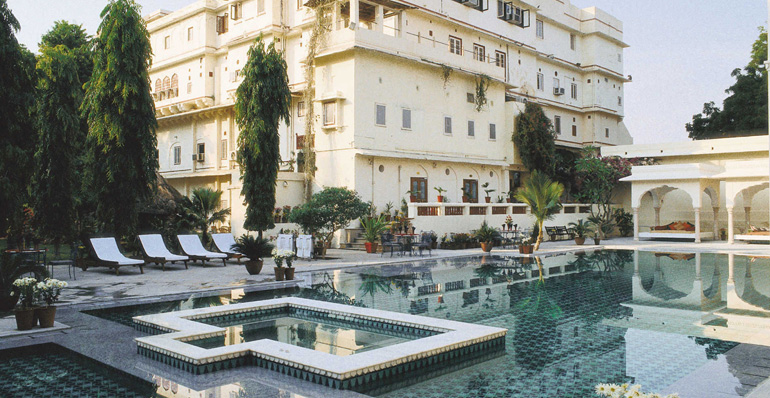 Known as the ‘pink city’, a fond link to its rose-hued architecture, Rajasthan capital Jaipur is all about colour and chaos. Its streets are alive with the sharp sounds of beeping horns as tuk-tuk drivers swerve around roaming cows and speedy mopeds, all the while fresh spices perfume the air. There are so many historical jewels to explore here, from the Monkey Temple – where playful monkeys swim in sacred waters – to Jaipur’s superstar monument, Amber Fort.

Boutique heritage hotel Samode Haveli is a real gem. This Indian mansion was built more than 150 years ago and, while it’s been restored to include a mosaic-patterned pool, Ayurvedic massage centre and authentically-styled rooms, its old-world charm has remained. The fantastic central setting means you’ll be able to immerse yourself in this alluring capital, but step through the hotel doors and you’ll feel a million miles away from the city’s frenetic streets. The deluxe rooms and suites, which were former royal apartments, have been individually designed with their own distinct style. Some feature grand four-poster beds and others have deep tubs tucked under arched coves. You can taste local Rajastani flavours at its magnificent dining hall, where huge chandeliers drape over decorative tables. And if you’re a dessert fan, you’ve got to try the home-made ice cream. 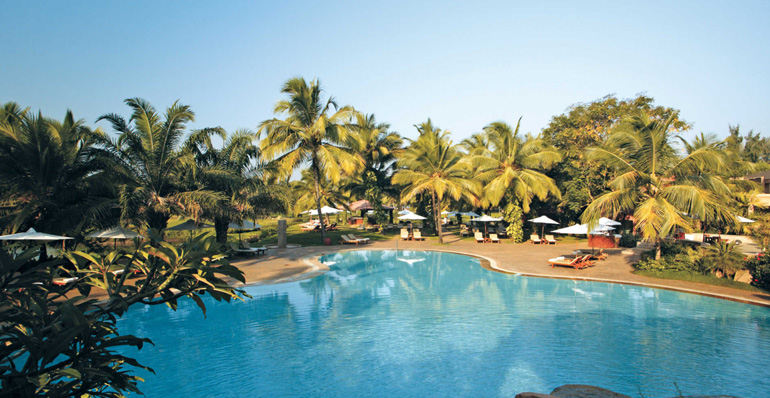 When you think of Goa, you might picture lively bars and activity-fuelled beaches, and while that may be part of its story, we can take you to a whole other side to the region where there are sleepy beaches and peaceful fishing villages. For a gentle, slow-paced holiday, flee the crowds in the north and head to South Goa. Its laid-back bohemian vibe and less-trodden sands make it a dreamy away-from-it-all escape.

Reflecting the spirit of South Goa is illustrious resort, The Leela Goa. It’s one of our finest hotels and a stay here is sheer bliss. The style is fresh and modern, but dotted around the retreat are little nods to its culture – from traditional Indian archways to local trinkets – giving it great character. Framed by natural lagoons and 75-acres of gardens, the hotel also has a large free-form pool with comfy sun loungers – an idyllic chill-out spot. Big golf fan? Its 12-hole golf course is speckled with palm trees and has epic views of the ocean. If you’ve never tried an Ayurvedic treatment before, the spa here has specially crafted therapies to revitalise the mind and body – or give yoga and meditation a go in the calm surroundings of the resort. For us, above the luxurious design and facilities, it’s the staff that really makes this hotel stand out. They are incredibly attentive and always go the extra mile to make you feel like royalty. 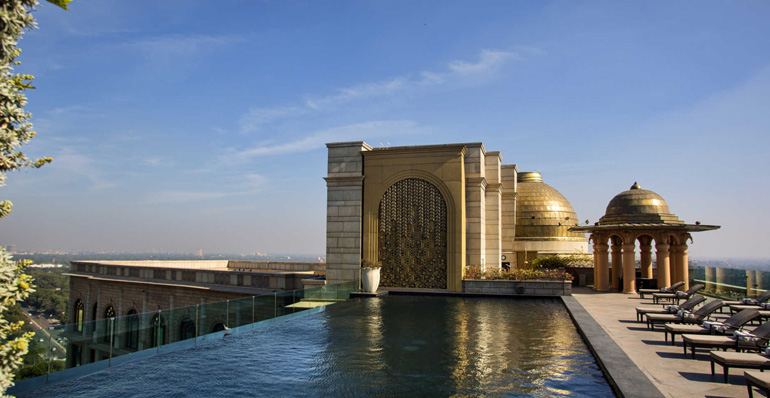 India’s nickname, the ‘land of contrasts’, is especially true in Delhi, where the history and ancient architecture of the Old City meets the shiny white colonial buildings of New Delhi. Explore the UNESCO-listed Humayun's Tomb and feast on spicy chaat and stuffed parathas at Chandni Chowk bazaar.

If you’re looking for an uber-luxurious stay, The Leela Palace New Delhi has the wow factor. Thousands of flowers decorate the hotel and striking art drapes the walls. It also has some of India’s most decadent rooms and its rooftop infinity pool is a stunning place to chill out after a day exploring. We love the nostalgic Library Bar. Find a comfy spot among the books and choose from its massive range of wines and Champagnes or relax with a fine single malt whisky and cigar. There’s also the world-class ESPA Spa, with holistic treatments like its Deep Muscle Massage or toxin-eliminating Detox Ritual. Every detail is thought about at The Leela Palace and with its central location, you’ll be on the doorstep of the city’s favourite sights. 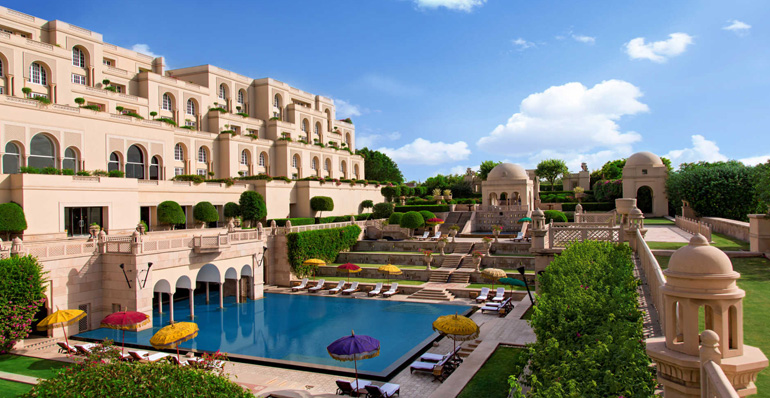 Imagine it’s early morning, the black sky is turning milky blue and the sun is starting to peek over the platinum-white domes of India’s iconic Taj Mahal. Seeing this extraordinary landmark at sunrise is a mind-blowing experience. But there’s more where that came from. If you can’t bear to tear yourself away from its awesome beauty, we know a hotel that shares the same attitude.

The five-star Oberoi Amarvilas is completely unique as every room has uninterrupted views of the Taj Mahal. Set just 600 metres from the monument, this Mughal-inspired hotel has pretty arched passageways, dark wooden furnishings and a warm colour palette making it feel super cosy. Take advantage of the 24-hour butler service, grand courtyard pool and lavish spa. 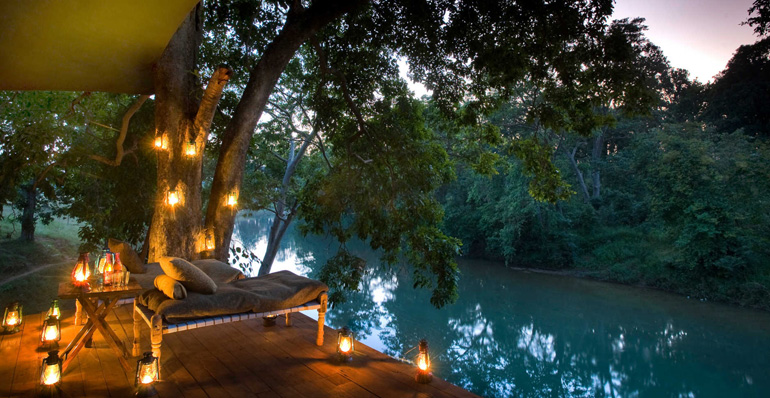 It’s no wonder the captivating setting of Kanha National Park inspired The Jungle Book. You can easily picture Mowgli and Baloo dancing and singing around this natural playground, with its thick bamboo forests and tall sal trees that tickle the clouds. Plus, its high concentration of tigers means you might be lucky enough to spot one of these majestic creatures in the wild.

For a rustic stay, we recommend the luxurious Taj Banjaar Tola – a chic safari lodge set on the borders of Kanha National Park. Wake each morning in your gorgeous tented suite and absorb the sweeping views of Banjar River from your private deck. Service here is all about those personal touches, whether it’s your butler delivering fresh coffee and home-made biscuits to your room every morning, or the head chef preparing specially-crafted vegan dishes for you. The lodge’s incredible setting means you won’t have to travel far for potential wildlife sightings. Game drives are led by an expert guide, who will share their knowledge of Kanha National Park’s resident wildlife and help you catch a glimpse of its glorious big cats.

We are experts in crafting tailor-made holidays, so if you fancy combining a few of these hotels for the India adventure of a lifetime, or discovering more on a fully-independent tour, you can talk to someone who has been there by searching for one of our India experts. Alternatively, order our India brochure online for a little inspiration to get you started.

Read more about our India holidays