Our expert guide to the most amazing Italy beaches

From islands to rivieras, Italy beaches come in all shapes and sizes. In Sardinia mile-long beaches boast soft-white sand while along the Amalfi Coast there are hidden-away coves backed by lofty cliffs and pretty-as-a-picture fishing villages. At the height of summer the best beaches in Italy can get very busy but if you explore a little further you’ll find a secluded spot of your own. Wherever you find yourself, the sun is likely to be shining, the water clear and the gelato mouthwatering.

Sardinia is where you’ll find Italy’s best beaches. From the picture-perfect Costa Smeralda in the northeast to the secluded Chia in the southwest, the beaches are wide, gloriously sandy and seriously sun-kissed.

The turquoise water and fine white sand of the Costa Smeralda could give the paradise islands of the Indian Ocean a run for their money. Between towns such as Porto Cervo and Porto Rotondo, where the harbours are full of glittering superyachts and the streets are lined with high-end boutiques, there are a string of bays – some wide and long, others small and rugged – that draw the crowds in the height of summer. Bookended by fawn-hued rocks and with views over to Isola Soffi, Capriccioli beach is one of the most beautiful on this stretch of coast. A little further up the coast is Spiaggia del Principe, a small cove that’s reached by a ten-or-so-minute-walk along a rocky path. The beach was named by Prince Aga Khan IV, one of the resort’s founders, who thought this was the most spectacular spot along the entire coastline.  You won’t be the only one heading here to find out if he was right so arrive early in the morning or during the island’s shoulder season to see at its pristine best. Both beaches are within easy reach by road from our featured Costa Smeralda hotels – CPH Pervero and Abi d’Oru.

On the south coast of the island, there are fewer sweeping bays and hidden away coves but this doesn’t mean the region is any less beautiful. Here the beaches are wide and long – and perhaps a real highlight for some, less crowded. The city of Cagliari sits around halfway along the south coast and it doesn’t matter if you head southeast or southwest from here, you’ll reach a beautiful stretch of sand in no time. The village of Chia is one of the most popular spots on the south coast thanks to its handful of bays that are backed by rolling sand dunes and resorts such as the outstanding Chia Laguna (Hotel Village, Hotel Laguna and Hotel Baia). Just a short distance along the coast to the northeast is Santa Margherita di Pula which backs an almost continuous beach of almost six miles in length. It’s here you’ll find the family-favourite resort of Forte Village with its extensive facilities. Head in the opposite direction from Cagliari and you’ll reach the town of Villasimius and the beautiful Capo Carbonara. In this corner of Sardinia, you’ll be spoilt with 20 miles of wide golden beaches and pretty bays all packaged with a stunning mountain backdrop. The Pullman Timi Ama Sardegna has an unforgettable setting overlooking the Notteri lagoon, where wading flamingos can often be seen, and the beach and Mediterranean beyond. 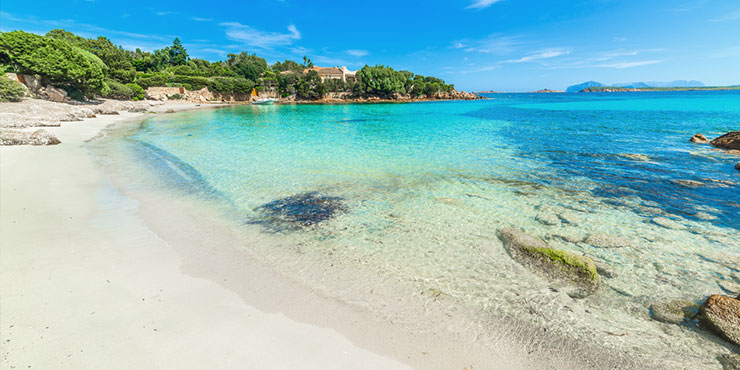 Like its fellow Italian island, Sicily has a glorious coastline. The landscapes are little more varied than Sardinia with bright-white cliffs, volcanic outcrops, crescent-shaped bays, pebble beaches and secluded coves alongside those wide and long stretches of sand. Cefalú on the island’s north coast is high on the list of the prettiest coastal towns in Italy. Its sandy-coloured buildings with their ochre roofs and the cliffs of Rocca di Cefalù create the perfect backdrop to a day by the water. You can visit this beautiful town from your hotel in Taormina on a full-day excursion.

From the hilltop town of Taormina you can jump on the Taormina Cable Car down to the shore in Mazzaró, which has a pebble beach that’s home to the luxurious Belmond Villa Sant’Andrea. A little further along the coast, La Plage Resort has an enviable setting opposite the pretty islet of Isola Bella. The rocky beach here and the sandy beach in nearby Giardini Naxos are the most popular in the area so expect them to be very busy in July and August.

The beaches along the south-west coast of Sicily, near the ancient ruins of Agrigento, stretch for miles and are separated by rocky headlands. They are backed by cliffs, a handful of hotels and resorts and a few coastal villages. This coastline is generally less crowded than those near Taormina and Naxos too. A visit to this side of the island should include a visit to the Scala dei Turchi, or the Turkish Steps. This white cliff rises dramatically from the beach and cobalt sea below. Another must-see spot along this part of the coast is the untouched and scenically spectacular Torre Salsa beach which is part of a WWF-managed natural reserve. The secluded Verdura Resort, a Rocco Forte Hotel is best placed for an exploration of this part of Sicily. 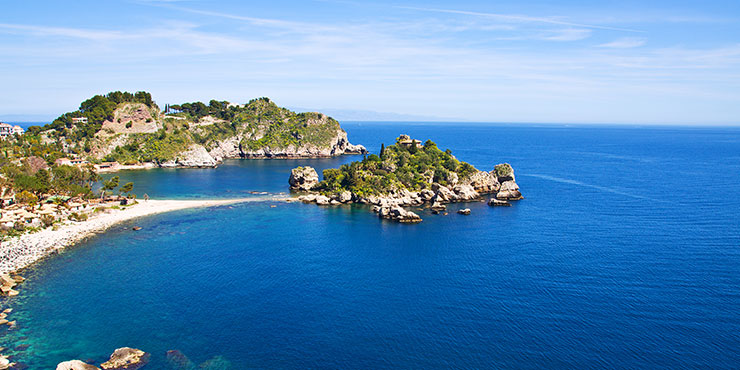 While the Amalfi Coast isn’t famed for its beaches – it’s all about the dramatic cliffs and towns clinging to the hillside here – the rocky coves are really quite beautiful. As you drive along the coast, stop for a paddle on pebbly beaches that can only be reached by steep staircases or from the sea, or enjoy lunch at a beach club in fishing villages such as Cetara and Erchie that are dotted along the coastal road.

When you imagine Tuscany, it’s the rolling hills, medieval towns and villages that come to mind. The region’s 250-mile coast, known as the Tuscan Riviera, is less widely known about. The busiest spot on this stretch of coast is the city of Viareggio, which has been welcoming Italian holidaymakers since 1828. The beach here is long, wide and sandy; in the summer there is row upon row of sun loungers and umbrellas while during the offseason the beach is almost deserted.

It’s not just the Mediterranean Sea with the breathtaking waterside landscapes – the world-famous Italian Lakes have their fair share of sandy shores. There are around 28 miles of beach in Lake Garda as well as plenty of spots to relax lakeside on Lake Como or Lake Maggiore. Set aside a day or two of your summer break to enjoy the views and cooling waters from Spiaggia Sabbioni in Riva del Garda, or soak up the lively atmosphere of Salo Beach on Garda’s western edge. 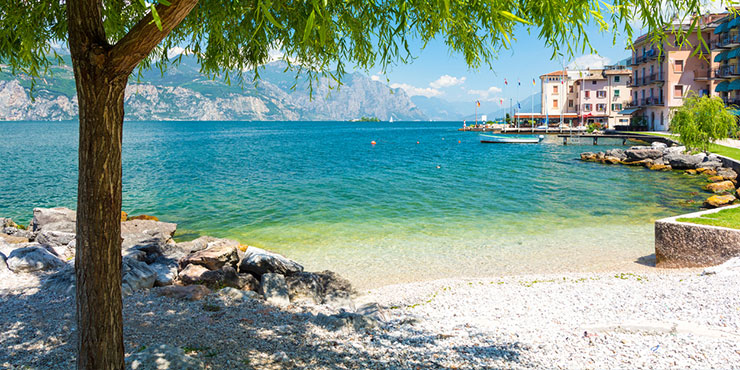