Our expert guide to the most amazing Sri Lanka beaches

Untouched coves backed by swaying palms, rocky outcrops shaped by the waves of the Indian Ocean, fishermen landing their catch of the day and popular resort towns  – Sri Lanka beaches are as varied as the landscapes of its exquisite interior. Our featured coastal resorts and hotels overlook some of the most popular and best beaches in Sri Lanka – from Negombo in the west, all the way round to Trincomalee in the northeast.

Best for: A lively atmosphere, gold-sand beaches, close to the airport

Of the three Sri Lanka coastlines we feature, the west is the most developed, the busiest and the place where most people will stay for at least one night. Lively Negombo is just six miles from the international airport and the set-off point for many cultural island adventures. You can spend a day or two at either Jetwing Sea or Jetwing Beach and make the most of the restorative effects of the sea air following your flight.

To the south of the capital, there is a string of towns, villages and resorts all the way down to Galle at the island’s south-west corner. Of our featured destinations, Wadduwa is the closest to the capital. Here, a long, straight beach is lined with a selection of hotels. This is not the best place for swimming in the sea, however, our featured resort, The Blue Water, has a beautifully situated pool with panoramic sea views. Continue along the main Colombo-Galle Road and you’ll reach Kalutara, one of the largest west-coast towns. To the north of town, there’s a long wide beach, home to the great value Tangerine Beach, that you can wander along for miles, passing traditional fishing boats pulled up on shore, resorts, restaurants and private villas. To the south, there’s a pretty peninsula between the sea and the Kula Ganga lagoon where the AVANI Kalutara is located.

The next stop along the coast is beautiful Bentota, one of the best beaches in Sri Lanka. ‘Paradise Island’ is a narrow strip of land that separates the Indian Ocean from a mangrove-lined lagoon. The calm waters of the Bentota Ganga are a popular watersports spot and one of the best experiences in the area is to take a boat trip along the river. If you’re staying at Centara Ceysands Resort & Spa you can head out on a river safari or take part in wakeboarding, jet skiing or a slightly more sedate pastime, canoeing. Our other featured Bentota property, Taj Bentota Resort & Spa has an exceptional setting overlooking a rocky promontory between two quiet and wide stretches of golden sand.

The west and south coasts are largely unprotected by reefs and therefore the sea can be rough and unsafe for swimming. This is particularly the case during the summer season during the south-western monsoon (May to September). 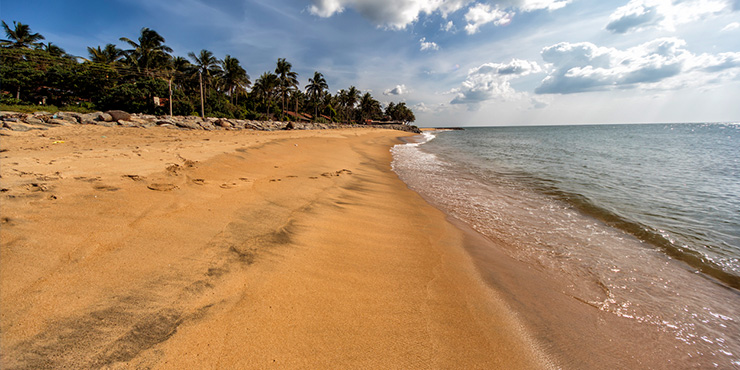 Between Galle in the east and Yala in the west, the south coast is dotted with low-key resort towns and a long string of traditional villages and the swiftly-growing city of Hambantota. Between these, you’ll find plenty of untouched beaches and pretty coves backed by palm trees, wildlife-rich lagoons and a handful of resorts.

The culturally-rich city of Galle acts as the gateway to the south, however, to reach the coast’s best beaches you need to travel east. One of our favourite spots around the coast – and a member of the Small Luxury Hotels of the World – is The Fortress Resort & Spa which overlooks a narrow part of the sleepy Koggala beach. A little further along the coast is the town of Weligama. From Sinhalese, its name translates to ‘sandy village’ which reflects its setting on a wide and sweeping bay; the Relais & Chateau property, Cape Weligama  is the nearest of our featured hotels to the town. If you want to swim in the sea year round there are just a few sheltered spots along the south coast. One of these is located in the village of Dikwella, just by Dickwella Resort and Spa which is bordered by water on three sides.

For the most spectacular scenery, stay in Tangalle which has one of the most beautiful stretches of coast in Sri Lanka. To the east of town, there are quiet coves hidden away by rocky promontories and towering palm trees and overlooked by low-key hotels like the Anantara Peace Haven Tangalle Resort. There’s a wide and long bay which becomes increasingly quieter and less developed the further you wander from town. 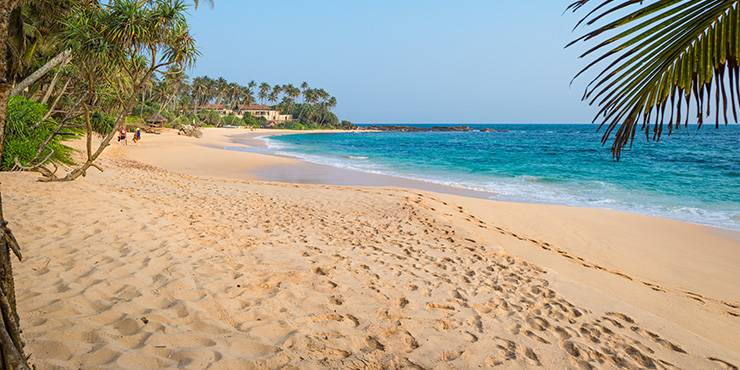 Although its popularity is growing steadily, the island’s east coast still has an off-the-beaten-track feel. It’s a real surprise too, especially if you are used to the golden sand and wilder seas of the west coast. The region is still developing with new hotels like Anantaya Passikudah opening their doors every now and then. The fishing village of Passikudah sits on a stunning bay with that soft white sand and shallow reef-protected waters that you expect from an Indian Ocean beach. As one of the first hotels to be built in the area, Maalu Maalu has the best setting; it sits right at the centre of the bay and has wonderful beach vistas which your eyes are drawn to across the pool. Uga Escapes’ Uga Bay has a similar outlook and every room has views of the shore.

Trincomalee, or Trinco as it is affectionately known, is the main town on the east coast. The closest beach is the palm-dotted Uppuveli. There are just a few guesthouses and hotels along the beach including Trinco Blu by Cinnamon. Hidden away on a remote beach to the north of Trinco you’ll find Uga Jungle Beach, the most secluded of our Sri Lanka beach retreats. There’s little else around other than miles of sand and a selection of cabins veiled by verdant forest. 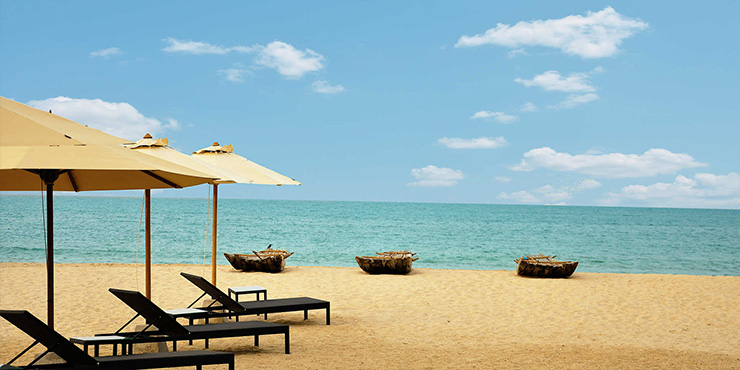