Kuoni’s Emma Tibbets speaks to Lucy Read, the fundraising and communications officer at David Sheldrick Wildlife Trust, about the valuable work the trust carries out in Nairobi, Tsavo National Park and beyond.

‘It could be as little as 12 years until African elephants are extinct’ – this reality is shocking, upsetting and to be honest, a bit of a surprise. In just over a decade, these stately creatures, an iconic resident of the continent of Africa, will be a distant memory for those lucky enough to see them in the wild and just pictures in a history text book for the generations that follow us.

During my recent trip to Kenya I was lucky enough to visit the David Sheldrick Elephant Orphanage in Nairobi National Park. Whilst I was there I discovered that the UK office is based in Leatherhead, the town in which I grew up, and I knew I had to visit and find out more about the trust, its history and the incredible lengths they go to in order to help orphaned African elephants, rhinos and a host of other species.

Please tell us a little bit about the history and vision of the trust.

Established in 1977 by Daphne Sheldrick in memory of her late husband, the founding ranger of Tsavo National Park, the David Sheldrick Wildlife Trust works tirelessly to protect wildlife, secure habitats and release orphaned animals back into the wild. The orphanages in Nairobi National Park, Voi and Ithumba [both of which are located in Tsavo National Park] were set up to help young elephants and rhinos.

What are the reasons that an orphaned elephant might end up at one of the orphanages?

About 90-95% of the time the calf has been found alone as their family members have become victims of poaching. We have found a few elephants that have fallen down wells, their mothers may have tried to pull them out but either due to nearby community land or for the survival of the remaining herd, they are forced to leave. It can be all sorts of reasons and sometimes it’s a mystery, but the majority of the time it’s because of poaching.

Where do the orphans usually come from?

In and around Tsavo National Park, however we have an aerial surveillance unit as well which is constantly patrolling various regions of Kenya. We work very closely with the Kenya Wildlife Service as well, allowing us to reach out to parts of Amboseli National Park.

Elephants are incredibly clever creatures and they share some the same emotions as humans. Do you think that is why we empathise with them more so than other wildlife species?

You’re right, I think humans do feel quite connected to them and although we don’t look alike we share similar attributes. In terms of cognitive behaviour we are very similar. They mourn just like we do; there are lots of similarities there. 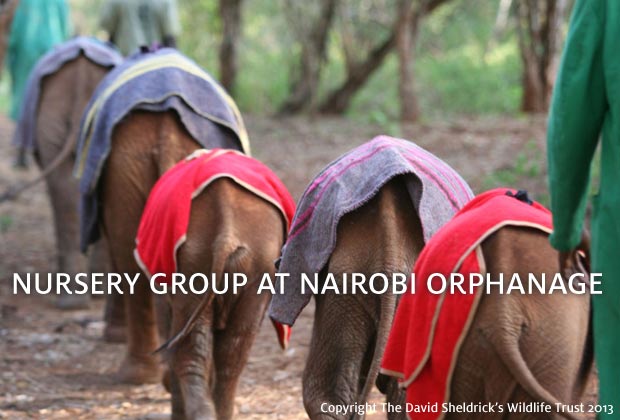 What is the progression of an orphaned elephant from arriving at the nursery to being released back into the wild?

An elephant could come to the nursery [in Nairobi] at any age really, from very young – a couple of weeks ago we had a calf come in which was estimated at just one day old – up to between 6 months and a year. After they are rescued they are flown into Nairobi and come into the care of the keepers at the nursery. The first couple of weeks is the most critical time and during this period they are fed regularly with a mixture of formulated baby milk and porridge oats. They are fed frequently throughout the day until they get to a point where they are more stable. They’ll go out into the bush in Nairobi National Park and mingle with the other orphans and it is during this time that we really try and integrate them together so they build an internal herd.

They stay at the Nairobi orphanage for two to three years and when they’re ready they are transported to the Voi or Ithumba units. They will stay there until they are about 8 or 10, again with the keepers but enjoying a lot more time out in the bush than when they were at the nursery. In their own time they will go off into the wild and they’ll come back and stay for a couple of nights and then, eventually, they will just not return. Some of the orphans do come back years later; a few of them have even brought along their new families.

Can you tell us a little bit about the keepers that work for the trust?

We have a group of male keepers who are all from Kenya. There are about 50 at the Nairobi orphanage and less at Voi and Ithumba where the elephants are more independent and therefore don’t need quite as much care. The keepers at the nursery stay with the calves 24 hours a day, while at the Voi and Ithumba units they sleep nearby so they can assist the elephants throughout the night should anything go wrong. When they are little bit older they usually just leave them at night. Altogether they spend a lot of time with the orphans building up a lot of trust and a connection which is fundamental for the elephant’s growth, both physical and psychological.

Joseph, who is the head keeper at Voi, came over to talk to British children about Kenya, wildlife and culture at a recent Kenya week which was run by British Airways. Joseph has worked with the elephants for years – he loves them, they are like his family and the kids really loved hearing his stories.

Apart from rearing the orphans what else does the trust do?

We have the community outreach programme, which involves working with local Kenyan schools and communities. A lot of the pupils at these schools don’t actually see wildlife and sometimes it is easy for them to forget how amazing their country is. It is important to involve children more with the wildlife and educate them from a young age as their future is dependent upon it.

We have established many boreholes and windmills to enhance the dry season productivity of Tsavo. We also have three mobile veterinary units that allow us to treat inured, wild animals in their natural environment. The trust has also been instrumental in de-snaring vast areas of Tsavo National Park, having successfully removed over 125,000 snares. Due to the continued illegal trade in ivory, our eight Anti-Poaching Teams operate alongside the Kenya Wildlife Service (KWS) patrolling Tsavo National Pack in search of ivory poachers and illegal hides. Thanks to our quick-thinking and skilled rangers, the DSWT and KWS have arrested over 1000 poachers.

What’s the trust’s main focus at the moment?

We started the ‘iWorry – Say No to Ivory’ campaign at the end of last year, encouraging people to sign a petition to put elephants on a more endangered level. This was taken to the Convention on International Trade in Endangered Species (CITES) meeting, in which governments from around the world meet to discuss endangered species. We were hoping from that this would be successful and then in turn the ivory trade would be re-addressed and hopefully brought to an end.

Unfortunately it wasn’t the best outcome for elephants and it could be as little as 12 years until African elephants are extinct. They are going to be readdressing it again in 2016. We are losing time, we can’t afford to sit back and wait so now we are carrying on with our ‘iWorry’ campaign. We want people to step up and take a stand and tell the government that there must be an end to the ivory trade in order for elephants to have a chance of surviving beyond 2025. Read more about the iWorry campaign.

Are there any stories from the trust’s history that really stand out for you?

Eleanor, one of the elephants Daphne worked with when she was younger, was rescued at two years of age in 1960, wandering alone near her mother’s body, she was very vulnerable. Having grown up alongside Daphne and taking the role of the matriarch with many of the new arrivals she is now wild in Tsavo National Park and has, herself, raised a beautiful female calf. To think that Eleanor has gone through the whole transition – through all the different stages of the orphanage – and gone into the wild to build her own family is wonderful. It shows that although humans can do such awful things to animals, they can do such great things as well.

For more information about the trust visit their website – www.sheldrickwildlifetrust.org. We recommended adding on an additional day in Nairobi to the beginning or end of your safari in order to visit the orphanage. You can visit independently and see the incredible work they carry out first hand, or join our Daphne Sheldrick Elephant Orphanage, Karen Blixen & Giraffe Centre experience.