Travellers to exotic waters, like those surrounding the islands of the Maldives, may be treated to a natural phenomenon that turns the night-time ocean into a field of glowing stars.

As waves break on the sandy shore, or bare feet step into wet sand, a bright blue glow appears. This magical effect is caused by the bioluminescent plankton that often appears in warm coastal waters. 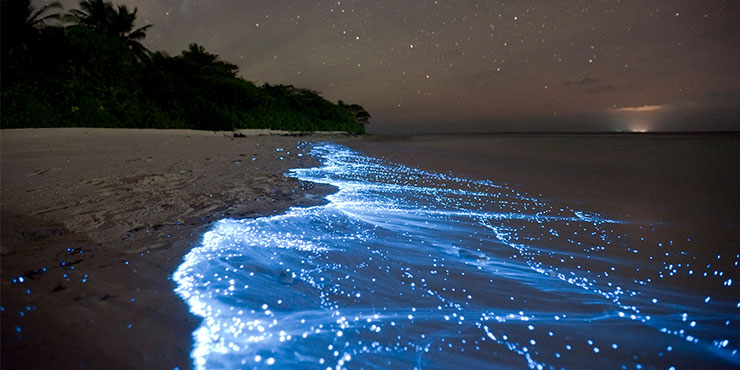 How to spot bioluminescent plankton

One man who understands the wit and chance needed to locate bio-luminescence is Kris Williams, a photographer specialising in time-lapse landscape and astro photography whose work with bio-luminescence was recently featured on BBC Earth.

Kris says ‘As with most natural phenomenon, it is a huge challenge to put yourself in the right place at the right time. Blooms of bioluminescent plankton are notoriously difficult to predict, and they occur most often far out in the ocean. It is only when tidal currents cause them to be washed towards the shore in large numbers that you will be able to see them from land.’

Although its shore-line appearance is a rare occurrence, you’re more likely to spot bio-luminescence with some determination, patience and these few key pointers from Kris:

Where to see bioluminescent plankton

If you want to see the bioluminescent plankton for yourself then there are a number of locations throughout the world where they regularly appear. Luckily, most of the locations where the plankton appear also make good holiday destinations. The Maldives is famous for shining white beaches and teeming marine life and almost every island is visited by glowing plankton. High season for spotting the plankton is mid-summer through to winter but it can appear at any time.

San Diego is another place where locals and holidaymakers report seeing the waves glow as they break on the shore or shine as a surfboard cuts through a wake. Other countries that have reported sightings of bioluminescent plankton are Australia, Vietnam, Thailand, Puerto Rico and Jamaica.

Magical moments in the Maldives

Marine wildlife photojournalist Doug Perrine, has been lucky enough to witness the phenomenon several times. He recounts the time he saw bio-luminesce in the autumn of 2010 in the Maldives.

“The island was straight out of a picture postcard: dense jungle foliage in the interior and a long sandy beach wrapping around the perimeter, and nary a human inhabitant. Mouth-watering smells wafted off the portable grill as the crew set up a portable dinner table on the beach. Our safari boat drifted lazily at anchor offshore. For the next few hours we passengers had this Robinson Crusoe island to ourselves. A fiery sunset was illuminating the sky, and a luscious feast was in preparation. What could be better? I was about to find out! 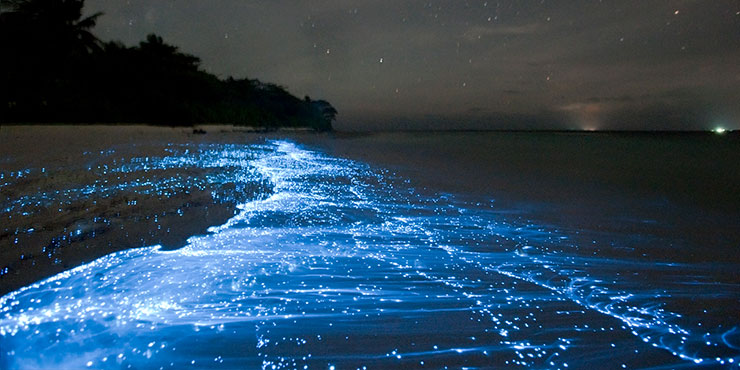 As the last embers of the crimson sunset faded away, a most remarkable scene, supernatural in appearance, began to reveal itself. The gentle surges of water lapping up against the shoreline were glowing with an eerie turquoise radiance, dotted with bright specks of light, much like the stars that were just starting to light up overhead. Every movement of the water excited the source of the illumination. When I strolled along the waterline to investigate, each step left a glowing footprint in its wake. I could lift my foot and point the sole forward to use as a torch! With a finger, I could trace messages in shining letters in the sand. As a diver, I was familiar with the phenomenon of bio-luminescence. I had experienced this marvel on night dives by turning off my torch and waving my arms and swim fins around to excite the plankton. But it wasn’t until I was on a safari boat cruising the islands of Raa Atoll, in the far north of the Maldives archipelago that I managed to capture it on camera. We had stopped for an evening picnic on the uninhabited side of Vaadhoo Island, which has a forested interior, and a sandy beach. As it grew dark, the wave wash lit up with ghostly blue light. This time I fetched my camera. I had no tripod, so I improvised by snuggling the camera into a beach towel placed on a plastic deck chair.” 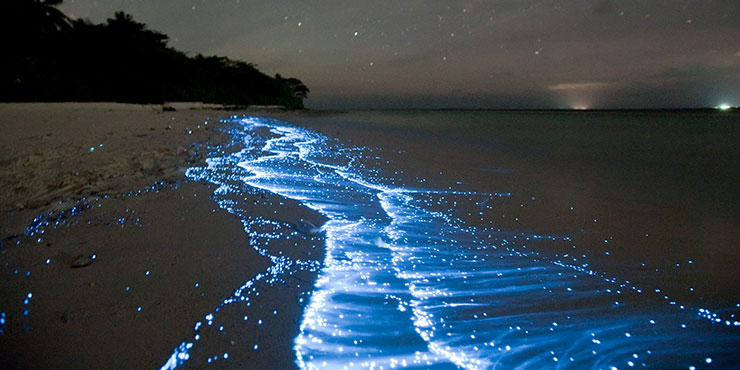 “The most difficult requirement for photographing bio-luminesce, is to be at the right place at the right time. I only know that I saw the above event at Vaadhoo Island in late October and at another island (without a camera) in Raa Atoll in late September. I have also seen bioluminescence at Kihaadhuffaru Island in Baa Atoll in mid-October, but it was less dramatic, probably because of the resort lights shining on the beach.”

Visit our photography page for tips and advice from Kris and Doug on how to take the best photos of bioluminescent plankton.

Scientists have only recently discovered that this type of plankton glows when they are agitated - ironic when you consider how relaxing the sight of the shimmering waves are in the dark night. Bioluminescence is used as a defence mechanism to draw predators towards the creature trying to eat the plankton. The tiny flashes of light also disorientate and surprise the predator.

These tiny organisms produce light using a chemical called luciferin. The process of creating a bioluminescent light, which is simply light produced within a living creature, differs between organisms. Some need a particular food or another creature for the effect to happen. But this type of plankton, called dinoflagellates, produce luciferin on their own. The light the tiny plankton emit is called ‘cold light’, meaning less than 20% of the light generates heat.

Huge areas of the ocean can become populated by glowing plankton but the effect is especially common in warm-water lagoons that have narrow openings to the sea. This causes the plankton to gather and become trapped, causing the water to turn orange.

Evoking images of white sands, swaying palm trees and crystal blue waters, this is the quintessential picture-perfect holiday – with an added sprinkling of something special. Far-flung and exotic, it's the ultimate luxury beach escape. We’ve been offering holidays here for over 20 years, and there’s a reason that it’s our most popular destination.

Read more about our Maldives holidays