This year we will see an important milestone marked in the Maldives. The remote Baa Atoll, a unique area of the ocean where the biodiversity is unlike anywhere else in the world, celebrates its 10th anniversary as a designated UNESCO Biosphere Reserve. We take a closer look at why this milestone event is so important and share our favourite resorts in the Baa atoll.

Why visit the Baa Atoll?

The remote Baa Atoll is home to a handful of extraordinary, eco-friendly resorts and the thriving (but fragile) reefs are a bucket-list dream for diving and snorkelling enthusiasts. Due to the area’s unique geographical location – perfectly positioned above an open channel on the edge of the deep ocean – the atoll is an aquatic wonderland home to no less than 250 species of vibrant coral and over 1,200 fish species. But what the Baa Atoll is most famous for is the opportunity to swim with marine megafauna – whale sharks, dolphins, and the world’s largest aggregation of manta rays. Each year, an astounding spectacle unfolds at Hanifaru Bay, as hundreds of manta rays and whale sharks gather to frenziedly feast on the nutrient-rich zooplankton that funnels into the atoll’s bays. This feeding extravaganza occurs during the southwest monsoon from June to November, but the mesmerising underwater life attracts tourists year-round. 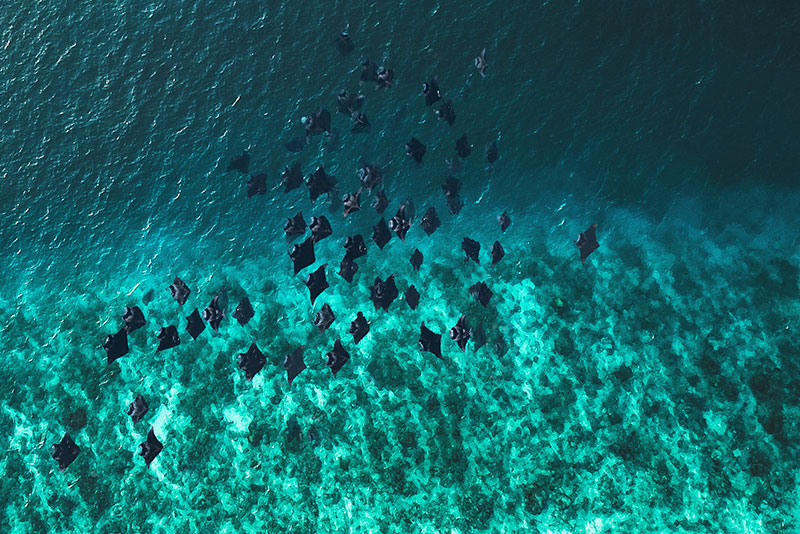 What is a Biosphere Reserve?

Defined by UNESCO, Biosphere Reserves are 'learning places for sustainable development' with three main goals; conservation of biodiversity, sustainable development, and direct support through research, monitoring and education. Because of the Baa Atoll's great ecological diversity and its environmental role as a transport hub of plankton, it was singled out in 2011 to become the Maldives first ever Biosphere Reserve.

Back in the early 2000s, increased fishing and tourism threatened the area's ecosystem, and something had to change. Although efforts were already in place to try and conserve the environment in and around the Baa Atoll, the Maldives Government and local communities recognised they needed to go a step further to ensure the corals and marine life stayed protected for future generations. And in 2011, UNESCO took the reins, officially declaring the Baa Atoll as a legally protected marine reserve.

Nowadays, many sustainable projects are in place within the atoll's borders tackling tourist management, reef damage, and pollution control. The Baa Atoll has become a model for marine conservation in the Indian Ocean, and there’s promising hope for the future of the Maldives oceans. In 2020, the southern atolls of Addu and Fuvahmulah gained Biosphere Reserve designations, and the goal is that the whole of the Maldives will be granted Biosphere Reserve status in the future.

Where to stay in and around the Baa Atoll

We share a few of our favourite resorts where you have the wonders of the Baa Atoll either swirling at the shores or within easy reach from your island resort.

Hidden in the heart of the Baa Atoll, Milaidhoo Island Maldives is a boutique luxury retreat like no other. This romantic island resort has some of the most opulent villas and residences in the Maldives – both on the beach and over-water – with infinity-edge private pools, sweeping sea views, and a vast sundeck to compliment the 'outdoor living' philosophy. As well as being within easy reach of the atoll's most unique dive and snorkel spots, Hanifaru Bay is just a 15-minute speedboat ride away. However you don't have to leave the resort to experience the beauty under the ocean, as Milaidhoo's marine-protected house reef encircles the entire island and teems with turtles, sharks and tropical fish. We love the island's commitment to coral preservation. You can spend time with the resident marine biologist as part of their 'be a marine biologist' programme and support their reef sponsorship scheme by planting a coral tray to help regenerate the 'rainforests of the sea'. 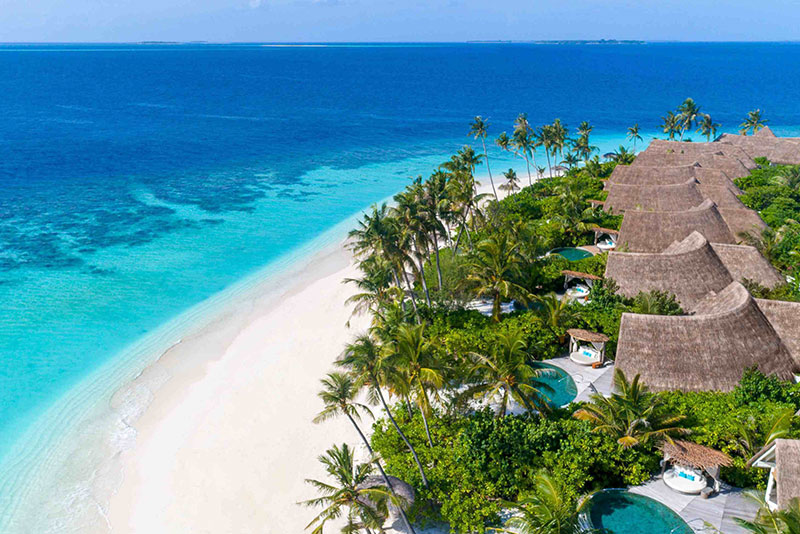 Finolhu is a sleek Baa Atoll hideaway with imaginative dining venues, a spectacular sandbank and glam rock décor. By day you can go thrill-seeking in the lagoon with water sports such as wakeboarding and jet blading or head out on a snorkelling safari to Hanifaru Bay. The island comes alive after sundown with stilt walkers, acrobats and DJ’s playing retro-funk beats into the night. But Finolhu is more than a cool island playground. Behind the scenes, the resident marine biologists are leading the way in ocean conservation with several outstanding ecological projects. In addition to monitoring the wildlife beneath the waves and taking action against coral bleaching, they work closely with Parley for the Oceans; an organisation that aspires to tackle plastic pollution in the sea.

If you’re the type of holidaymaker who needs more than a sunbed and a good book, Reethi Faru, in the nearby Raa Atoll, is set up for land, sea and even culinary adventures (thanks to its six dining venues). There are plenty of activities to keep you entertained, from canoeing, diving and paddleboarding out on the ocean to yoga and tennis on dry land. Plus, during the Manta season from June-November, you can marvel at the graceful rays in Hanifaru Bay with their snorkelling excursion to the far-flung Baa Atoll. The resort’s green credentials have earned them the title of the Indian Ocean’s Leading Green Resort 2020 by the World Travel Awards – and they’ve been nominated again for 2021. Keeping in line with their conservation promise, they’ve recently introduced two new projects, ‘Adopt a Tree’ and ‘Adopt a Coral’, allowing guests the opportunity to leave a positive footprint on the island. 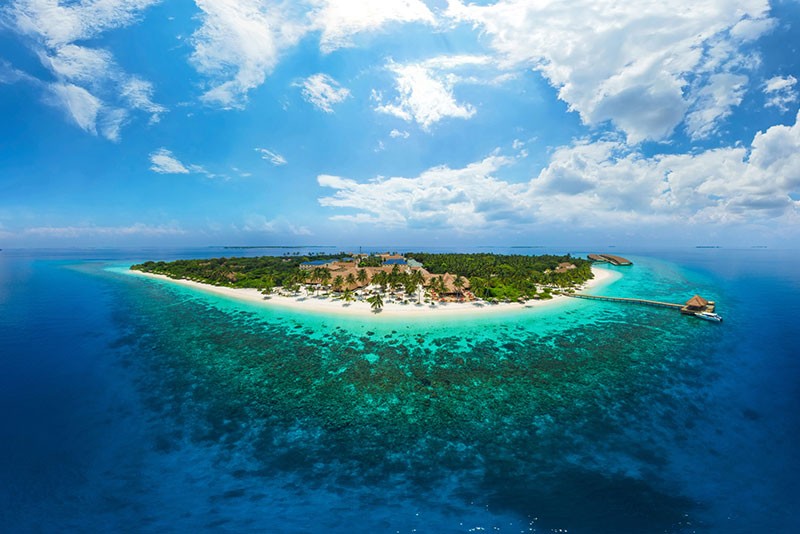 Dhigali Maldives is one of our favourite resorts in the less-developed Raa Atoll, not just because of the contemporary design and stunning sandbank, but for the new all-inclusive experience. You can leisurely dine-around in the four innovative restaurants, enjoy unlimited premium wines, beers and a wide selection of cocktails, and there’s complimentary activities such as dolphin cruises and watersports. Swim out to the lively house reef and you may spot species such as eagle rays, reef sharks and turtles, or encounter the manta rays and whale sharks in Hanifaru Bay (from June-November). As with other reputable Maldives resorts, Dhigali commits to sustainable initiatives. They have bid farewell to plastic bottles by installing an eco-friendly water filtration system, and they support local environmental projects such as island clean-up events. 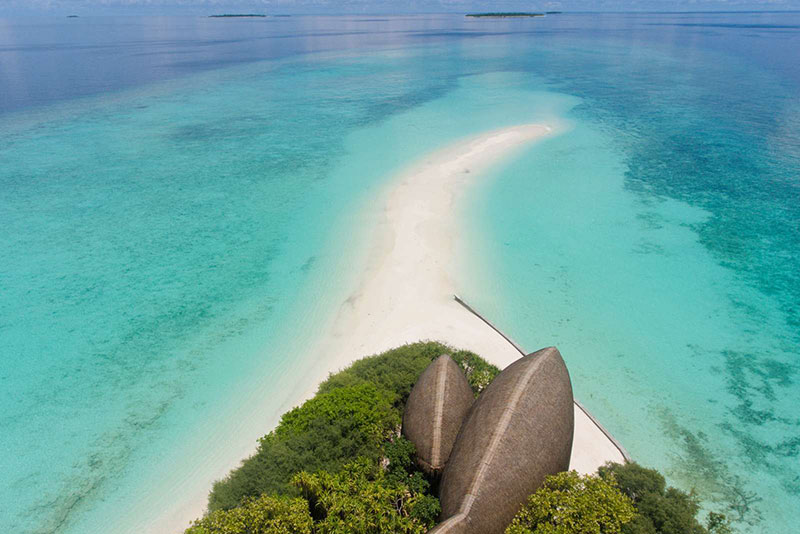 You can watch Hanifaru Bay’s manta ray gathering in action on BBC’s Blue Planet II: Coral reefs episode, which is available now on Iplayer. To tick off a bucket-list dream of real-life encounters with the aquatic megastars of the Baa Atoll, talk to a Personal Travel Expert or download our Indian Ocean brochure here to read more about the featured resorts above.

This feature was published on 15th July 2021. The information within this feature is correct to the best of our knowledge at the time of publish.