We stayed 5 days and absolutly everything was fabulous. From leaving the airport to checking out was done with absolute professionalism and with safety at the highest priority. The easy access to their sparkling clean beach, fantastic breakfast, delicious food, the breathtaking panoramic ocean views and most of all the superb hospitality and friendliness of the staff who deliver excellent customer service on a daily basis. Try it for yourself and you will see what I’m saying.

Looking for a special, relaxing getaway, I chose to stay at Fusion Resort in Phu Quoc - stunning villa with my very own pool and inclusive Spa services to boot. But what made it perfect was the entire team there. I was warmly greeted at the main entrance, and the Fusionista (I'm sorry, I forgot your name!) explained at length of the facilities, services and what I might enjoy at the restaurants. Nothing was too much trouble for them, and they made sure I was comfortable and had everything I needed throughout my stay. The only downside was that I couldn't stay for longer. But that just means I would have to return, and I definitely will! Highly recommended!

Fushion PQ has given me the best travel experiece. I have stayed at many 5-star resorts all over VN, but Fushion has brought the experience to next level. My Fushionista Nghi has well-prepared the stay based on my references on the pre-stay survey, customised the villa and carefully provided everything like electrical car driving in the resort, welcome cake, appointed car for arrival and departure, masks upon the departure, etc. I think its service worth every penny. Just that the menu of restaurant Pezca is too limited, and many services including Spa had to close down due to the COVID situation. I will definitely comeback when I have another trip in PQ.

From the moment I arrived, I knew Fusion was a unique place. Over a chilled welcome drink on a comfy sofa, my check-in was relaxed and thorough. My "fusionista" Ms. Vy (receptionist and personal concierge rolled into one) took the time to orient me with the myriad of activities and services available to me (and there were many)! She built a relationship with me and throughout my stay ensured no detail was left to chance, arranging my spa treatments, breakfast menus, outings, sightseeing... everything! Her restaurant recommendations were right on the mark. All rooms are villas, like having your own house! In the back yard are playful swings, sunbeds, and your own private pool. Inside, a handsome sunken timber tub and separate decadent monsoon shower. Each day Vy sent me an email to make sure everything was as I wished it to be. There was a strong determination to fix any issue or problem right away ( which there never was). The resort also offers a unique "breakfast anywhere, anytime" service, included in your room. If you want breakfast on the beach at midnight, or by the pool at sunrise, your wish is Fusion's command. I also loved that spa treatments are also included in your room rate. While the resort is quite spread out, a free buggy ride by a smiling attendant is only a phone call away. But I usually preferred to stroll because the grounds are immaculate and beautiful. The Pezca Restaurant has wonderful food and service and features some local must-try's. Everything at Fusion is done with panache and even a subtle sense of humor. My tongue-in-cheek guest comment form was emailed to me with a promise to arrange a complimentary helicopter transfer to the airport if I took the time to complete it! The team at Fusion is innovative, clever, and on top of their game. I would not hesitate for a second to recommend this resort to anyone.

La Veranda lies on the west coast of Vietnam’s relatively undiscovered Phu Quoc Island, far from the brilliant but chaotic mainland cities yet still offering a spectacular taste of what Vietnam has to offer. This romantic resort was voted 18th in the Top 100 Luxury Resorts Worldwide 2018, and it makes the most of the natural landscapes, surrounded by tropical greenery and merely metres from a long stretch of golden sand and clear waters – perfect for snorkelling and diving. The hotel itself is just as impressive – a French colonial-style mansion with striking white pillars, terracotta roof tiles and winding wooden staircases. That’s before you even get to the immaculate L-shaped pool area and spacious terraces, both ideal viewing points for wonderfully colourful sunsets. The resort’s Art Deco-style bar is a great spot for a leisurely evening cocktail, and there’s plenty of choice for places to eat. Enjoy a range of gluten-free, vegetarian, European or Asian dishes at The Peppertree Restaurant, and give authentic Vietnamese street food tastings a go, from pork noodle soup to seafood canapés. To feel the fresh sea breeze, head down to Le Jardin and soak up the views from the lawn and beach deck, or tuck into grilled meats and seafood at the barbecue on the beach. If you’re celebrating a special occasion, request the Sunset Champagne experience or candlelit dining under the stars on the beach. Choose from a range of spacious rooms and villas with either garden or ocean views; they’re all traditional and elegant in design, with four-poster beds and walls adorned with Vietnamese art. Upgrade from one of the Garden Rooms to a Premier Ocean and enjoy open sea views from your balcony or terrace. For the ultimate in luxury we recommend the La Veranda Ocean Villa, complete with its own private terrace and manicured garden. 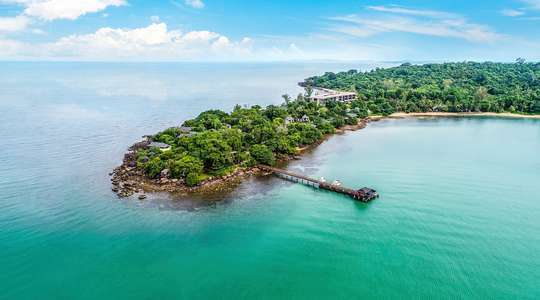 Nam Nghi has a superb beachfront position on Phu Quoc’s tranquil north-west coast, on a teardrop-shaped edge of the Mong Tay peninsula. The main hotel sits among clusters of tropical trees, and is backed by a long path winding through the greenery to luxurious ocean view villas dotted around on all sides. In front, there’s a patch of rocky shoreline which opens onto a stretch of golden beach; take a step down from the decked infinity pool framed by neat red-square parasols, and you’re already on the pristine sands — with unobstructed views and just metres between you and the calmly lapping turquoise waters. The hotel serves a brilliant choice of pan-Asian and international dishes by the pool, on the oceanfront and even on a private island. You can tuck into traditional Vietnamese and western dishes, a pizza from the centrepiece oven or a treat from the bakery at seafront Ocean Reflection. The informal pool bar is a top choice for light meals and snacks, and you can indulge in Vietnamese and Thai cuisine at the intimate Tree House, with views over Vung Bau Bay from under a lofty banyan tree. For an unforgettable meal out, head to the pier and take a quick boat ride to the exclusive Rock Island Club, just a stone’s throw from Mong Tay peninsula — enjoy sharing platters by day and custom-made cocktails by night on this tiny but luxurious islet, after soaking up its 360° panoramic views over the sea and Phu Quoc’s coastline. The rustic-luxe rooms at Nam Nghi have beautiful wooden floors, chic décor and stunning bathrooms. Ocean Deluxe and Ocean View Deluxe rooms have cosy open-plan lounge areas and spacious balconies. The Sunrise/Sunset Ocean Villas have four-poster beds and an elegant circular soaking tub; upgrade to one of these villas and you’ll also enjoy a private veranda with a hammock for two and breathtaking sea views.