Travel with us from central Mexico and the capital Mexico City, which is the country’s colonial heartland, to the Yucatan Peninsula. Here you can explore the fascinating Mayan culture and witness a stunning Caribbean coastline.

Here we explore the real gems of Mexico: 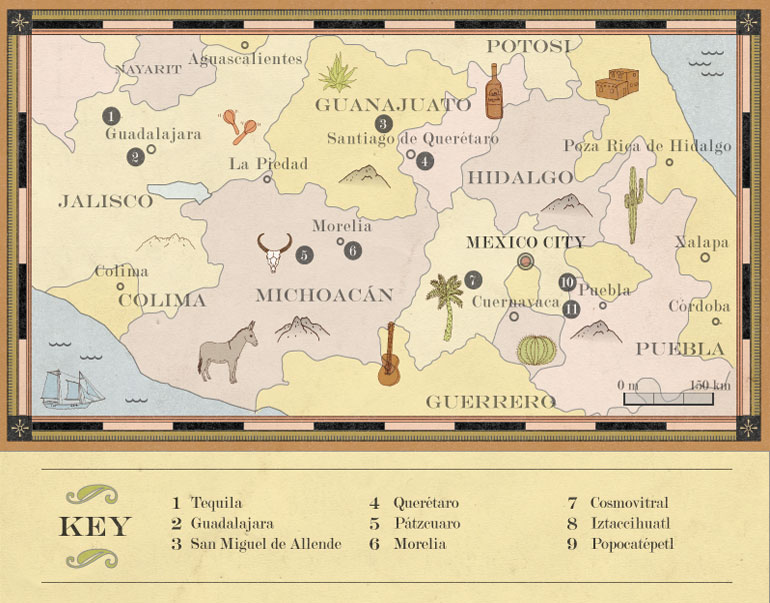 1. The town of Tequila is surrounded by blue agave plantations and distilleries where the famous spirit is produced.

2. The Central Mexico town of Guadalajara is at the heart of the nation’s traditional Mariachi culture.

4. Querétaro’s cultural centre showcases both Mexico’s pre-Columbian and Spanish heritage, and it is here the first plans for independence were formed.

5. Full of colonial gems and charming cobbled streets, the town of Patzcuaro is known for its indigenous craft markets.

6. Beautiful Morelia is home to one of the most spectacular cathedrals in Mexico and a wealth of 16th and 17th Century architecture.

7. The Cosmovitral is a botanic garden in the town of Toluca, with breathtaking stained glass murals making up the walls and ceilings.

8. Permanently snow-capped, the dormant volcano Itzaccihuatl is the country’s third highest and on a clear day can be seen from Mexico City.

9. Mexico’s second highest peak, Popocatepetl is also the nation’s most active volcano and is linked to the Itzaccihuatl by the Paso de Cortés mountain pass. 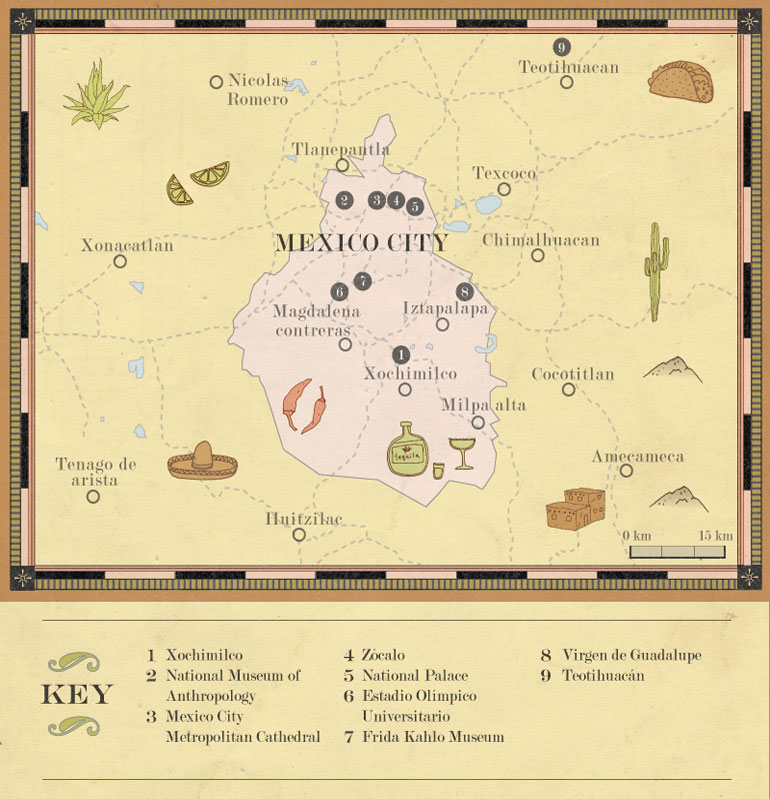 1. The waterways and man-made islands of Xochimilco are best seen during a cruise on a vibrant gondola-style boat, known as a trajinera.

2. At the heart of Mexico City’s Centro Historico lies the incredible National Museum of Anthropology, where you witness artefacts from Mesoamerican and Spanish civilisations.

3. The city’s striking cathedral, which sits on the renowned Zócalo, was built over several centuries on top of an Aztec precinct.

4. At the heart of the Historic Centre lies the city’s main square – the Plaza de la Constitución – commonly known as the Zócalo.

5. Taking up the whole of the eastern side of the Zócalo you will find the grand National Palace. This was the site of the rulers of Mexico since the Aztec Empire.

6. Built in 1952 the Estadio Olimpico Universitario was used for the 1968 Summer Olympics and the 1986 FIFA World Cup.

7. Also known as the Blue House, the Frida Kahlo Museum is dedicated to the life of the Mexican artist Frida Kahlo, showcasing her work, the majority of which are self portraits

8. The Basilica of Our Lady of Guadalupe is home to the original image of the Virgin of Guadalupe, making it one of the most Catholic pilgrimage sites in the world.

9. The pre-Columbian city of Teotihuacan is known for its spectacular pyramids and the main street known as the Avenue of the Dead. 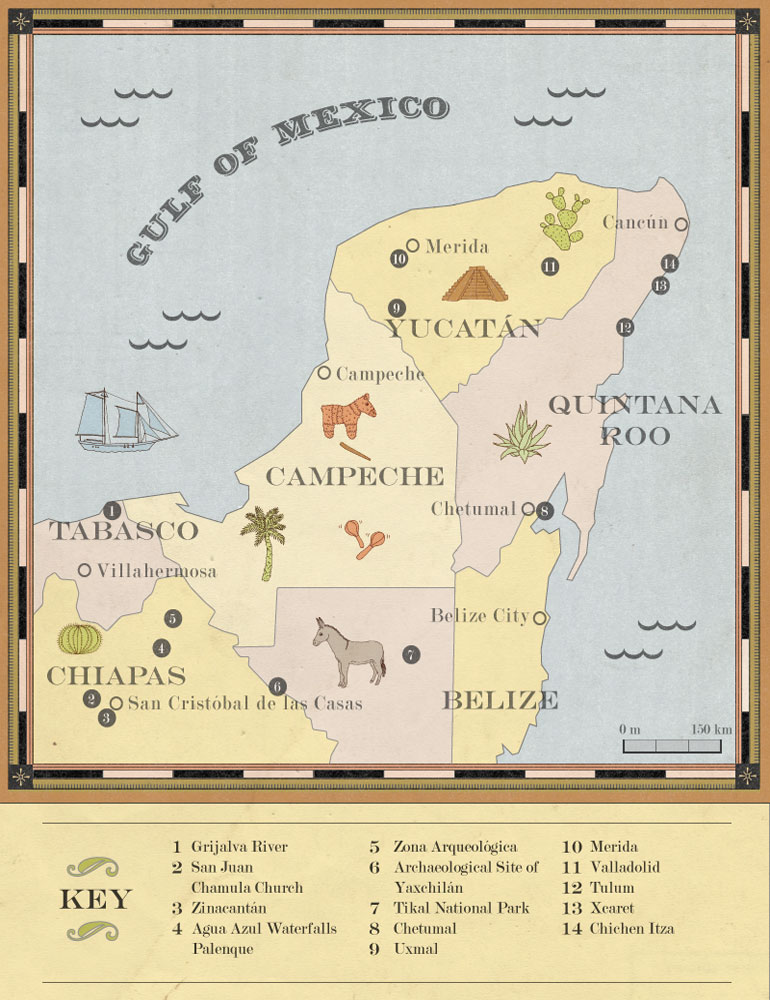 1. Flowing from the Chiapas highlands to the Caribbean Sea at Tabasco, the Grijalva is one of Mexico’s longest rivers.

2. In the village of Chamula a blend of Mayan and Catholic religious beliefs are held and the unique Church of San Juan Bautista reflects this.

3. Witness the unique culture of the indigenous Tzotzil Mayans in the village of Zinacantán, which is located in the Chiapas Highlands.

4. The ruins of Palenque are spread out over a vast area and showcase a fine example of refined Mayan architecture.

6. Adjacent to the border with Guatemala on the bank of the Usumacinta River are the ancient ruins of Yaxchilá, once one of the most powerful Mayan states.

7. Tikal National Park, in neighbouring Guatemala, consists of a vast area of rainforest and one of the world’s most important Mayan archaeological sites.

8. Close to the border with Belize is the city of Chetumal, home to the Museum of Mayan Culture.

9. Located south of the city of Mérida are the ruins of Uxmal, where the buildings have a distinct style of smooth walls and ornate friezes.

10. Beautiful Mérida is the capital city of Mexico’s Yucatan state. The heart of the city is criss-crossed by narrow streets, and is full of charming and colourful colonial architecture.

11. The small colonial city of Valladolid is a charming alternative to the more popular cities of Mérida and Cancun.

12. With its Caribbean-side backdrop, the archaeological site of Tulum is arguably home to some of Mexico’s most beautiful ruins.

13. Once one of the most important Mayan ports, the ruins of Xcaret are now part of the ecological theme resort Xcaret Park.

14. Probably the most famous of Mexico’s Mayan ruins, UNESCO-listed Chichen Itza is one of the New7Wonders of the World.

Discover the treasures of Mexico yourself on a tailor made journey or alternatively, join a group of like-minded individuals on an escorted tour. Speak to one of our Personal Travel Experts who can help you create your ideal Mexico itinerary.


Read more about our Mexico holidays