Known locally as simply ‘the E&O’, this heritage-rich hotel has an incredible setting.

Many cities around the world have that one hotel that’s steeped in history and evokes memories of a bygone era. Singapore has Raffles and Rangoon has The Strand, while in Penang’s vibrant capital Georgetown, it’s the Eastern & Oriental Hotel, an island institution. Since opening its doors 130 odd years ago, the E&O has welcomed illustrious guests from world-famous playwrights and authors to royalty. The architecture and décor reflects its late 19th-Century colonial beginnings with a striking Moorish Revival façade, grand staircases, antique furnishings and light and airy corridors with arched windows.

The hotel has two buildings – the original Heritage Wing and the Victory Annexe which was a 21st-Century addition. The former wing went through extensive renovations recently but lost none of its grandeur and sophisticated air. There’s a striking swimming pool which is exclusively for the use of Heritage Wing and Corner Suite guests which has views of the Straits of Malacca and the mainland coast. There’s also The Cornwallis, an exclusive lounge where breakfast and evening canapés and cocktails are served, and Palm Court, the venue where a traditional English afternoon tea is served every Friday, Saturday and Sunday. The modern Victory Annexe loses none of the old-world charm of the original building but the designers had the contemporary traveller in mind. There’s a fitness centre, a sea-view infinity pool on the sixth floor and a museum that charts the history of Penang and the hotel itself. This modern wing is also home to the buffet restaurant, Sarkies, and the cosy Planters Lounge.

The suites at E&O are stylishly designed with a mix of modern and light tones, antique furnishings, natural wood floors and partially marble bathrooms. Some of the suites, such as the Deluxe and Premier Suites, overlook the Straits of Malacca, while others like the George Town Suites have city views. We love the vintage-style roll top baths and more heritage vibes in the Straits Suites and Writers Suites. Over in the Victory Annexe are the Studio Suites, which have a balcony overlooking the water, and the dual-aspect Corner Suites.

On the waterfront, close to the heart of UNESCO-listed George Town and within walking distance to many bars, restaurants and shops 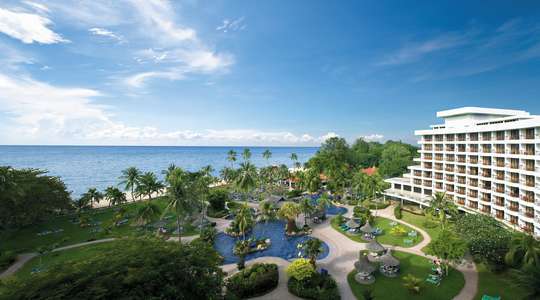 The focus here is firmly on family fun with an indoor Adventure Zone which has drop slides and play equipment, a Cool Zone Kids’ Club where guests between 5 and 12 years old can enjoy games and activities, and three pools; one including waterslides and a new splash zone – a mini waterpark with interactive water jets, a tipping water bucket, water sprays and more. If you’re looking for an active holiday, there are also tennis courts as well as regular beach and water volleyball matches. Casual and relaxed, the dining venues here include the main buffet restaurant, the Garden Café, and the al fresco family restaurant, Sigi’s Bar & Grill, which sits directly on the beach. Sigi’s serves delicious wood-fired pizzas, barbecued meat and fresh seafood. Continuing the modern theme throughout the hotel, the Cool Lounge has internet stations, magazines, five televisions, board games and refreshments, making it a great place to hang out. Back in the tropical grounds of the resort, you’ll find the relaxing outdoor Jacuzzi. If you want to completely unwind, head to CHI, The Spa at the nearby Shangri-La’s Rasa Sayang Resort & Spa. Or if you like to keep busy on holiday, there are also cooking lessons, craft classes and a 9-hole pitch and putt golf course here, and you can visit Penang’s capital George Town on the complimentary shuttle. The rooms have a fresh and vibrant style and are set in the resort’s main building. The Superior Rooms overlook the island’s jungle-covered hills, while the Deluxe Rooms have a balcony and views of the resort’s garden and pool areas. On the top floors are the Executive Seaview Rooms, which have spectacular views out towards the ocean. 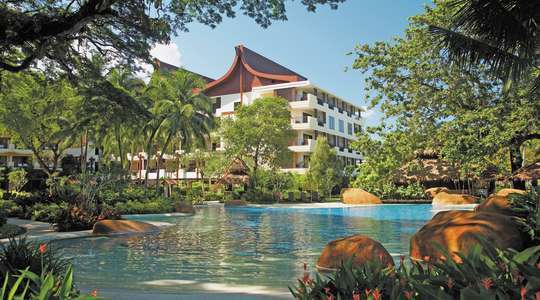