Day 1: UK to Tokyo Depart from the UK on your overnight flight to Tokyo.

Day 2: Tokyo On arrival, you’ll be met and then transferred to your hotel by shared airport shuttle bus. The rest of the day is free to spend at leisure. Stay: Grand Prince New Takanawa (or similar).

Day 3: Tokyo Today, join a guided city tour by private coach. Highlights include a visit to the Meiji Shrine, which has a serene forest setting right in the heart of the city, and a wander into the city’s wonderfully chaotic Shibuya shopping district. See the wackiest and wildest fashions and take in the hectic pace of the city as you attempt to cross the famous Shibuya crossing. Visit the Imperial Palace and head to the Asakusa District – one of Tokyo’s oldest neighbourhoods that was once the leading entertainment district during the Edo Period. Round off the day at the Tokyo Skytree to see incredible views of the city’s futuristic skyline. Stay: Grand Prince Hotel New Takanawa (or similar). B, L, D.

Day 4: Tokyo Depart by coach (8.30am) for the serene mountain town of Hakone. Your first stop is Mount Fuji’s 5th Station; the official entrance to the highest peak in Japan. Continue towards Fuji-Hakone-Izu National Park where you’ll ride the scenic Hakone Ropeway to the top of Mount Owakudani. Bask in the views of the active hot springs below and try a hard-boiled egg that’s been cooked in the sulphuric springs. Later, you’ll join a scenic cruise across Lake Ashi, which offers views of the iconic red torii of the Hakone Shrine. Board the coach and head back to the city where the rest of the evening will be at leisure. Stay: Grand Prince Hotel New Takanawa (or similar). B, L.

Day 5: Tokyo to Takayama Transfer by coach to Takayama, stopping en route at the beautiful Matsumoto Castle. A medieval treasure of Japan, the castle grounds are abundant in cherry trees that bloom pink in the spring and golden brown in the autumn. Continue towards Takayama, an Edo-period merchant town. Take a stroll through its narrow streets and see the beautiful old buildings, today used as inns, teahouses, shops and merchant houses. This evening dine in the hotel’s restaurant where you’ll have the chance to try Hida beef; a Waygu-style speciality of the region. Approx. journey time: 5 hours, 190 miles. Stay: Takayama Ouan (or similar). B, D.

Day 6: Takayama Explore the rich history of this rural town today, starting with a visit to the Miyagawa Morning Market. See local life in action as sellers from around the region come to sell their fresh produce. Continue to the Takayama Jinya, a former government headquarters of the Edo period, before visiting the Takayama Museum of History and Art to learn more about the history and culture of the town. You’ll also visit a local sake brewery where you’ll have the chance to treat yourself to a glass (or two). Tomorrow morning, your luggage will be sent ahead to Kyoto so pack an overnight bag with enough clothes for your night in Kanazawa. Stay: Takayama Ouan (or similar). B, L.

Day 7: Takayama to Kanazawa Depart for Kanazawa, stopping at the World Heritage-listed village of Shirakawa-go on the way. Discover some of the unique farmhouses up close; these centuries-old buildings are famous for their distinctive A-frames which look like hands in prayer. Continue to Kanazawa, a city known as ‘Little Kyoto’ which was spared from large scale bombing during the Pacific War. Kanazawa has managed to retain much of its traditional charm and is full of many intact and historic districts. Visit Kenroku-en Garden, deemed one of the ‘Three Great Gardens of Japan’, and head to the Nagamachi Samurai District, once the residential neighbourhood for the city’s samurai. While here, you’ll have the chance to explore the Nomura Family Samurai House; the most preserved of the district’s old houses. Approx. journey time: 2 hours, 75 miles. Stay: ANA Crowne Plaza Hotel Kanazawa (or similar). B, D.

Day 8: Kanazawa to Kyoto Transfer to the train station where you’ll board the limited express Thunderbird to Kyoto, a city home to 17 UNESCO World Heritage sites and more than 1600 temples and 400 Shinto shrines. On arrival head to the Sanjusangendo Temple, which is famous for its 1001 statues of Kannon, the goddess of mercy. End the day at the Fushimi Inari Shrine, a complete dream for photographers. Approx. journey time: 2½ hours, 138 miles. Stay: The Royal Park Hotel Kyoto Shijo (or similar). B, D.

Day 9: Kyoto It’s a full day exploring Kyoto. Visit the Kinkaku-ji (Golden Pavilion), which is coated in gold leaf and lies on the shores of a lake, and see the historic Ryoanji Temple – home to Japan’s most famous rock garden. Continue to the Arashiyama District, where you’ll visit the Okochi-Sanso Villa and the dense forest of Arashiyama’s famous bamboo groves. Take a rickshaw ride alongside the river and visit the 14th-Century zen garden of Tenryuji Temple. Stay: The Royal Park Hotel Kyoto Shijo (or similar). B, L, D.

Day 10: Kyoto Early this morning (8am) transfer by train to Hiroshima, Japan’s haunting city. Visit the thought-provoking Peace Memorial Park and Museum, where you can read first-hand accounts of the fateful nuclear attack and see the famous A-Bomb Dome – also known as the Hiroshima Peace Memorial. Later, catch a ferry over to the picturesque island of Miyajima; a sacred national treasure that’s home to the UNESCO-listed Itsukushima Shrine. Return to the mainland and travel back by train to Kyoto where you’ll arrive at your hotel later this evening (approx. 10pm). Stay: The Royal Park Hotel Kyoto Shijo (or similar). B, L.

Day 11: Kyoto Embark on a full day tour of Kyoto, starting with a visit to the popular 8th-Century Kiyomizu-dera Temple. Leave the temple behind as you wander down to the historic Higashiyama District; a neighbourhood found on the lower mountain slopes where you’ll have some time to shop for souvenirs and delicious snacks. Experience a traditional Japanese tea ceremony before making your way to Nishiki, a bustling market street known as ‘Kyoto’s Kitchen’. Over a hundred vendors sell local delicacies here, with specialities including the likes of octopus skewers, dried seafood and tofu doughnuts. Continue to Nijo Castle and discover its magnificent audience halls that were built for the Tokugawa Shoguns during the Edo Period. As you walk the castle’s corridors, listen out for the squeak of the ‘nightingale floors’; so-called for their chirping sound that alerted against potential intruders. End your day in the city’s historic Gion District, one of the most famous Geisha neighbourhoods in Kyoto. Watch an authentic Maiko performance before sitting down for a farewell group dinner at a nearby restaurant. Stay: The Royal Park Hotel Kyoto Shijo (or similar). B, L, D.

Day 12: Kyoto Transfer to Osaka airport by shared airport shuttle bus for your return flight to the UK. B.

Great for those who want to delve a little deeper into the histroy and culture of Japan.

• For guests over 16 (unless travelling on a private journey, where the minimum age is 12)
• Average group size of 14 guests
• A maximum of 18 guests
• Journey times do not take into account stops or local traffic conditions
• We recommend travelling with no more than one suitcase and one day bag
• A good level of fitness is required
• Tipping is not expected in Japan

• This tour is not suitable for those less mobile – sightseeing mainly takes place on foot and many miles will be covered each day
• The Hakone Ropeway may be closed in bad weather
• You will need to pack an overnight bag for your night in Kanazawa
• Areas of the Kiyomizu-dera Temple are currently undergoing renovations
• Japanese hotel rooms can be small in comparison to other countries
• Travelling around Japan is unlike travelling in any other destination; you should arrive with an open mind and flexible approach
• Mount Fuji is often shrouded in cloud so visibility may be limited
• The order of the itinerary may change depending on traffic and weather conditions.

Japan is renowned for its hospitality and throughout you’ll experience consistently high standards and superb service. We have chosen modern westernised hotels in Tokyo and Kyoto, which are both centrally located with great facilities. In Takayama, you’ll stay in a Japanese-style hotel which is full of character. Complementing the comfortable western-style beds, traditional features include the tatami flooring and a rooftop onsen.

Private tour Upgrade to a private tour with a local tour leader on the same itinerary, departing on the date of your choice from £9643 per person.

You’ll visit many of the must-see attractions in the main cities of Tokyo and Kyoto, as well as experience some lesser-visited mountain towns. Enjoy a taste of the local culture with experiences like the sake-tasting in a local brewery, trying the famous Hida Beef in Takayama, exploring an ancient Samurai House in Kanazawa, and watching an authentic Maiko performance in the historic Gion district of Kyoto. 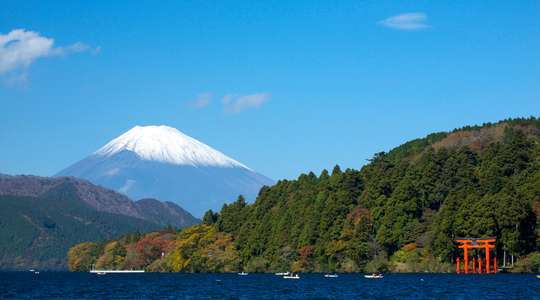