Whether it is the location, or the fact that this was my very first time here.... is there anyone that does not like to galivant with the rich and famous. If it were not so expensive, I would definitely give it an 'excellent' rating over the 'very good' above. But on the other hand, where else could you get this level of history, pizzazz, view, pampering and service and excellence, while almost floating in the clouds.... Maybe I have been too fortunate to have had too many great things in life, that I am becoming a curmudgeon, but I do like things on the newer side, that show no wear or tear. Don’t get me wrong, this place is over the top. Was I just in a Bond movie?

We visited to celebrate my husbands birthday. The reception staff could not have been better. They remembered on our arrival to wish him a happy birthday, they ensured we had a lovely room after we requested a change. And we were given a birthday cake and Prosecco which was a lovely touch. The actual hotel is gorgeous, the pools are great, the spa is lovely as is the sauna with an amazing view. We spent time in the indoor pool (heated to 28 degrees) and the heated outdoor pool, both are lovely. Housekeeping were lovely and excellent. Breakfast is vast and fantastic with a wonderful view, service was very good, only one lady who seemed to be the manager (long brown hair ponytail, short in height) was less friendly and we heard her on numerous occasions telling off the other waiters in an aggressive tone which seemed unnecessary. Everyone else was fantastic. My main criticisms for the hotel are regarding the bar. The live music in the bar at night was poor, it was a man singing to a backing track on a keyboard. It felt like something you find at a 3 star hotel. It was not in keeping with the hotel and felt tacky for a 5 star. They should just have acoustic or solo piano or saxophone. Get rid of the backing track! This musician was more than capable of doing that which would have been more tasteful. The other issue we had with the bar was that the manager stopped me and my husband from having our complimentary Prosecco bottle (provided by the hotel) in the hotel bar. We found this ridiculous given we were given the bottle as gift from the hotel for his birthday yet we were told we can’t drink it in the bar. Particularly odd given the bar only had 3 tables in use. It was empty! The manager told us the Prosecco is meant to be drank in our room. We then asked to drink it in the lounge as it was my husbands bday. Which the manager allowed. He then must have realised how absurd and petty he was being because the place was empty. He then tried to make up for it by giving a dessert with a candle. Overall we found the experience frustrating, and the bar incredibly pretentious. The weather was mixed in mid October. Sunny some days and rainy a few days. But the place is still beautiful and lake como is lovely and quiet yet everything is still open. We took a ferry to neighbouring towns (Varenna and Bellagio) easy to use and still runs in October just less regularly. Tremezzo town is small and we ate dinner there once, I preferred the neighbouring towns mentioned above due to the wider variety of restaurants. Can’t recommend this hotel enough. It is expensive but worth it for a special occasion as it’s worth the price.

Grand hotel tremezzo in lake como is a piece of art. It was a palace & then converted into hotel. Staff are very friendly & helpful. Breakfast buffet is variable & suits all people. The view from the room was amazing. From there fairy acn be taken to bellagio & verrena islands. Some other tours like hollywood tour is also available. Stay there is very relaxing

Not as Grand as it used to be

We had been so looking forward to returning to the Tremezzo after seven years, but was sadly disappointed to find it had changed, and not for the better. The staff seemed without proper management, with the exception of the parking crew (Louis etc.) & Manon, whose exceptional service and cheerful disposition was outstanding (she surely deserves a promotion), but otherwise, some of the waiting staff particularly were surly and without genuine warmth. We sorely missed Dario, the former Maitre'D, who has sadly moved on, but whose presence made sure the restaurant ran with smooth precision and his friendly professionalism was infectious and was reflected in the staff. The room (Lake View Deluxe) was in effect a small suite, with dual aspect being on the corner, a spacious and beautiful bathroom, a wardrobe each, comfy bed, and was a delight. We had a table booked for La Terrazza restaurant for a birthday/anniversary (of which they knew), but no effort was made to celebrate this. A lacklustre meal followed (unworthy of Michellin and a purported 5* restaurant, average wines, zero ambience, and waiting staff that seemed disinterested and mechanical. A total reversal of what we experienced before, and in line with other guests' experiences of woe and worse, it really was a shame. We would not have dined here again had we been staying longer, something that was repeated to us by others. The breakfast here is legendary, well it was, it seems average now, choice is good but now geared towards the American tourist (of which there were many!), the only buffet eggs available were scrambled, unlike before where a chef in the restaurant cooked your eggs any which way you wanted). Now, it's a special order of €17 for anything other, audacious when you are paying in excess of £1000 per night! The wine bar was far better, with knowledgeable and enthusiastic staff, good wine & food, great atmosphere. The spa was average, costly treatments that were not up to standard, let alone having to pay excessively for! The indoor pool was okay, with hot tub outside, but all the lounging chairs were taken so there was nowhere to sit. We asked for our car keys to retrieve something we had left in there, and was told they would be sent to our room (why they couldn't be fetched or brought to the reception was beyond us). An hour later, they still hadn't arrived, so we phoned down to enquire. 30 minutes later, someone bought us up a can opener(!!), so we visited reception and told them of the incident, which amused them no end. It did not amuse us however. We ended up having to go downstairs and get the keys ourselves, some 2 hours after first asking for them. I do hope the owners of the Tremezzo, such an illustrious hotel, listen carefully to guests' comments and get things in order, to make the hotel worthy of it's 5* it purports to have. It really is only worth 4* at best.

This beatiful palace was built in 1910 , so more than 100 years its thousands of lights shine since then on the waters of the lake. Many foreign guests, especially Americans, we were the only Italians present Our stay in this hotel was wonderful. 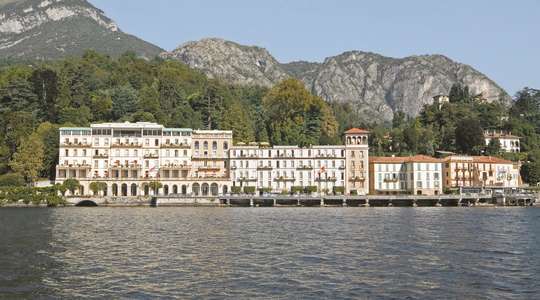 The setting of this charming and historic hotel, between the dramatic mountains and the waters of Lake Como, is one of its main attractions. From the moment you make your way through the grand entrance – which gives you a real sense of the traditionally Italian atmosphere of the hotel – days can be spent relaxing by the pool behind the hotel, or on the various terraces and gardens that surround this former palace. The hotel is on the waterfront in the small and quiet village of Griante, and is just a short distance from the ferry port making it easy to reach the popular lakeside towns of Bellagio and Varenna. All dining venues here come with a lake view as standard. The spacious main restaurant Le Serre, where the daily buffet breakfast is served, has large picture windows to make the most of the setting; in the summer months breakfast can be eaten out on the pretty terrace, the perfect way to start your day. The fine dining establishment Al Chiaro di Luna is open for romantic al fresco evening meals. The bar on the fourth floor has breathtaking views. The rooms are classic in style and are a comfortable base from which to explore the delights of Lake Como. Choose a simple Standard Room overlooking the hotel’s gardens; a Lake View Room for waking up to views of the water; or a highly recommended Lake View Balcony Room, which has a small balcony or terrace. 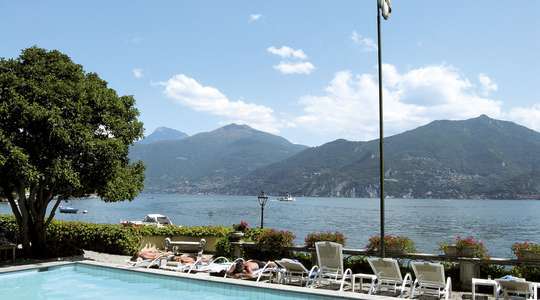 A beautifully preserved classic style and an almost unrivalled location make this a popular choice in Menaggio. Views of the lake are available around almost every corner and it is just a short walk to the centre of the town and the ferry port. A real highlight here is the heated outdoor swimming pool which is is superbly positioned in pretty gardens right at the water’s edge – a rarity in the region. The surrounding sun loungers are placed in the perfect spot if all you want to do is soak up the sun as well as the lake and mountain views. There are two restaurants here, one of which is open seasonally. The refined à la carte Clio Restaurant overlooks the lakeside gardens and is open for dinner. The laid-back La Veranda Restaurant is where, during the summer season, you can dine al fresco overlooking the lakeside gardens and the mountains. This is also where the generous buffet breakfast is served each day, as well as a set four-course dinner each evening. The hotel’s central setting means you can also head out to the town’s restaurants, cafés and bars if you’d like to try the local cuisine or go for a pre- or post-dinner drink. The rooms here are simple, yet spacious and comfortable with a traditional design. There are modest Standard Rooms which overlook the resort of Menaggio, however we highly recommend opting for a Lake View Room which overlooks beautiful Lake Como. There are also Lake View Rooms with Balcony that have a small balcony with pool and lake views. 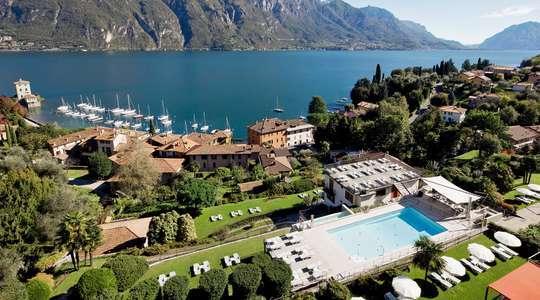 This highly-rated hotel is surrounded by beautiful terraced gardens which command fantastic views across the lake. The service here is welcoming and friendly as you would expect from a hotel that has been run by generations of the same family since the late 19th Century. On warm summer days you can retreat to the swimming pool and outdoor Jacuzzi which are both surrounded by the meticulously manicured grounds. If you are seeking rejuvenation there is an on-site spa offering massages and hydrotherapy treatments. Particular attention is paid here to the cuisine, with the majority of the produce, such as cheeses, seafood and meat, sourced locally and prepared with both passion and skill. During the summer months, dinner can be enjoyed al fresco at the Terrace restaurant, with spectacular views over the lake to the mountains beyond. Throughout the year, local delicacies are served at The Veranda. The rooms combine both a modern and traditional style, each space providing you with comfort and a calming ambience. Classic Rooms have red or pastel tones and have park views or, for a supplement, lake views. Comfort Lake View Rooms are a more spacious choice and many feature a Jacuzzi.