The best places in the world to see turtles

What have you always wanted to know about turtles and where are the best places in the world to see them? We talk to Dr Peter Richardson, Head of Ocean Recovery at the Marine Conservation Society, to put together the ultimate guide to sea turtles.

What’s the difference between a turtle and a tortoise?

The word turtles can be a confusing word, largely due to the Americans calling every shelled reptile (or Testudine) a turtle. In the UK, as a general rule, those that live on land are known as tortoises, those that live in fresh water are terrapins, while sea turtles live in the ocean.

Tortoises live on land, so have legs and feet adapted for walking with the body held off the ground. Tortoises generally have a more box-shaped shell, although there are exceptions. For example, the pancake tortoise of Eastern Africa, which hides away from the heat of the day and predators by crawling into narrow crevices in rocks, and so has a flattened body shape.

Sea turtles all have a flattened body shape and smooth shells, which make them more hydrodynamic so they can swim more efficiently. Sea turtles also have flattened feet, known as flippers. The front legs are muscular and the feet are large and oar-shaped to power them through the water. Turtles can swim at high speed for short bursts, which helps them escape predators such as sharks. The smaller back legs are also flattened and act as rudders to help steer the turtle. All sea turtles nest on sand beaches, and the back flippers are also perfectly designed to dig flask-shaped nest chambers in the damp sand.

How long have turtles existed?

Why are turtles becoming endangered?

Aside from turtles being hunted in the past, and to some extent now, all species have been affected by egg collection; nesting and foraging; habitat disturbance and destruction due to coastal development; pollution; fisheries bycatch; and now climate change. A sea turtle’s sex is determined by the temperature at which the eggs are incubated, with hotter temperatures producing more females. Climate change threatens to significantly feminise populations if the sea turtle species cannot adapt in time.

If we’re snorkelling or diving and come across a turtle, what’s the etiquette?

Swimming and snorkelling with turtles is the best experience and I thoroughly recommend it. But it is important to give the turtle space – don't chase it at speed, don't try and touch it, allow the turtle to go about its business without disturbance. Some individual turtles can be aggressive if cornered and can give a painful bite, so it's always best to look but don't touch.

Yes. The international trade in all sea turtle products is banned by nearly all of the world's nations, so anyone buying turtle products abroad and bringing them back home will be breaking laws. The hunting of green and hawksbill turtles for their shells has been a major cause of population decline, and continues to be a major threat to the future of these species in South East Asia.

Is it helpful to visit turtle sanctuaries?

This depends on the place. As a general rule, turtle hospitals in Europe (e.g. Greece) and the USA (e.g. Florida) tend to be doing a good job, rescuing and rehabilitating sick and injured turtles for release back to the wild. But some turtle sanctuaries, like those found in Sri Lanka, are a different matter. These places may be operating with good intentions, but their practice of retaining thousands of cute baby hatchling turtles in tanks to show to paying tourists seriously compromises the life and future of the hatchlings. Turtle hatchlings must make their way to the sea immediately after hatching, and the longer they are kept away from the sea in their first two days, the lower their chances of survival. The practice of keeping hatchlings in tanks has no real conservation value and I wouldn't recommend visiting places that do this.

What can I do on holiday to help with turtle conservation? 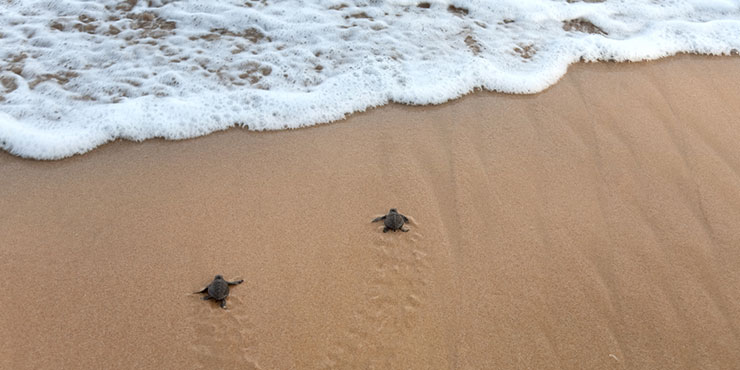 Turtle hatchlings naturally head towards the light of the moon on the sea – but if bright lights from bars or hotels are lighting up the beach, hatchlings may head inland rather than towards the waves. It is thought that only one in 1000 hatchlings will go on to survive to become an adult.

What are the seven different types of turtle and where can you find them?

Flatback turtles feed on various marine invertebrates. They are found only in the waters surrounding Australia and Papua New Guinea, where they live in shallow inshore waters and nest on beaches in northern and eastern Australia. 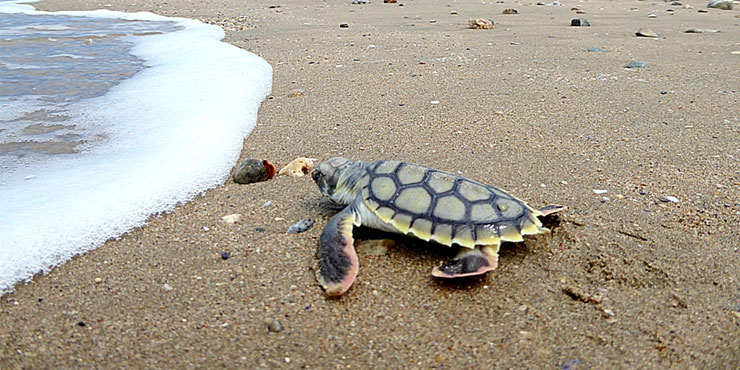 Endangered green turtles are largely herbivorous, and as adults feed on seagrass and marine algae, but will also eat invertebrates like jellyfish. They can be found throughout the tropics and sub-tropics, but a small population lives in the Eastern Mediterranean and nests in Turkey and Cyprus. Historically green turtles were, and continue to be, hunted for their meat, which has led to massive population declines. Conservation, particularly on nesting beaches in some regions such as the Caribbean, Costa Rica and Florida, is leading to local population recoveries. 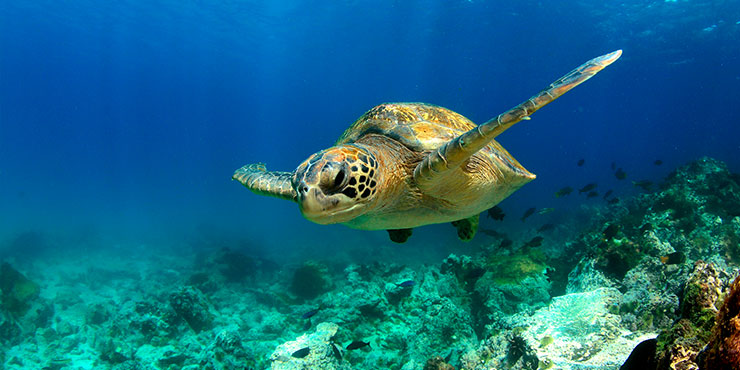 Hawksbill turtles are critically endangered and feed on sponges and other invertebrates. They are found throughout the tropics and sub-tropics, in destinations such as Antigua, the Maldives and the Seychelles. They have been historically hunted for their shell, which is used to make 'tortoiseshell' and has led to massive population declines. Conservation, particularly on nesting beaches in the Caribbean (Antigua, Barbados, Puerto Rico) and the Seychelles, is leading to local population recoveries. 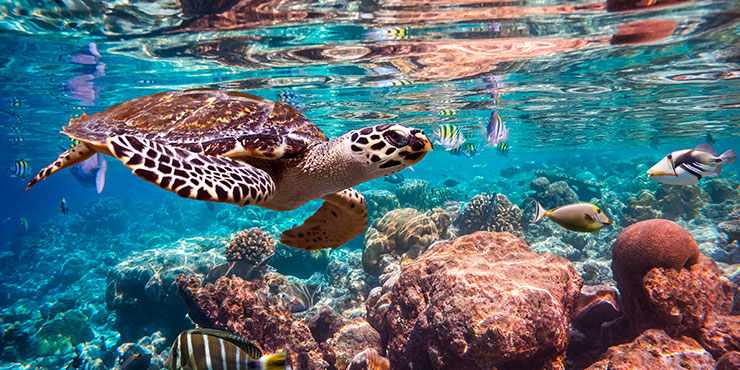 Leatherback turtles have been classed as ‘vulnerable’. They feed on jellyfish and other soft-bodied oceanic invertebrates. It is the most widespread reptile on Earth and found in all the world's oceans, as it is specially adapted to migrate to cool climates in the summer to feed on jellyfish blooms, and so has been recorded within the Arctic Circle and south of New Zealand. It has been hunted for its meat, which has led to massive population declines, but conservation is leading to population recovery in parts of the Caribbean (US Virgin Islands, Puerto Rico, Trinidad and Tobago). 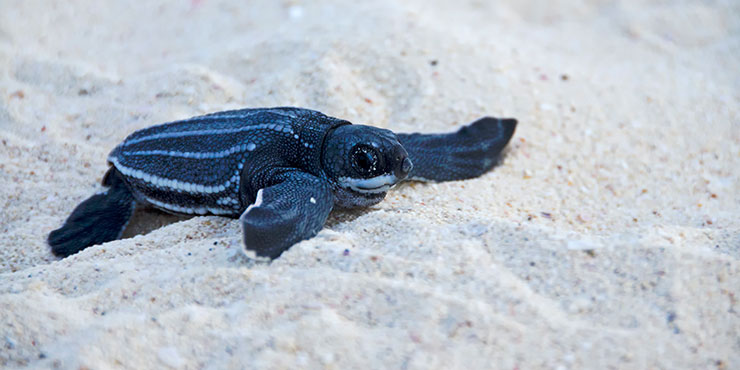 Loggerhead turtles have also been classed as a vulnerable species. They feed on fish, hard-shelled crustacea and molluscs, and other invertebrates. They can be found throughout the tropics and sub-tropics, as well as some temperate regions such as South Eastern USA (especially Florida) and the Mediterranean (Greece and Turkey). Loggerhead turtles have been hunted for their meat, which has led to massive population declines. Conservation efforts on the nesting beaches have led to population recoveries in places such as Greece, South Africa and Australia. This species is also susceptible to bycatch in fisheries, especially as juveniles when they live out in the open ocean and take bait on long-line hooks, and as adults when they get caught by bottom-towed trawlers targeting shrimp and prawns. 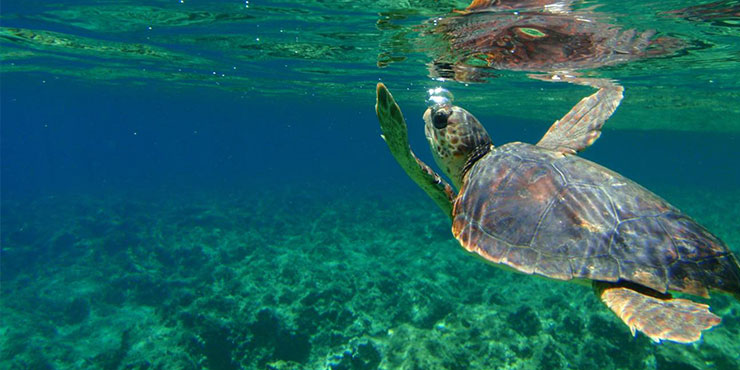 Kemps Ridley turtles are critically endangered. They feed on fish, hard-shelled crustacea and molluscs, and other invertebrates. They nest only in a few sites in the Gulf of Mexico and are found largely in the Caribbean region, with juveniles found in the Atlantic, often stranding on UK beaches in the winter. The rarest of all the turtles, it was on the brink of extinction in the 1980s due to hunting for meat and collection of eggs, but strict conservation at the nesting beaches and the use of bycatch reduction devices in Gulf of Mexico fisheries have led to the population recovering, although the species is still very much conservation dependent. 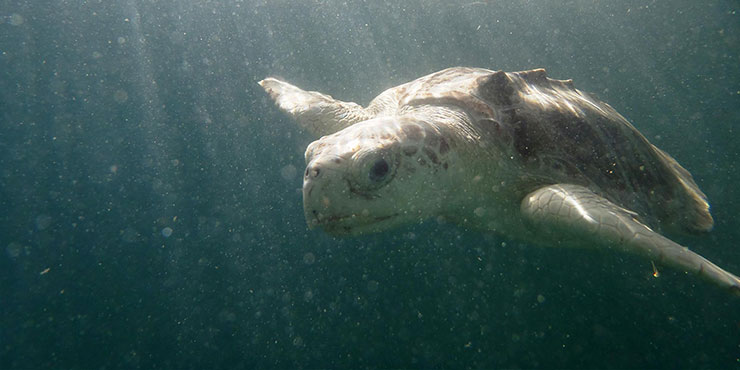 The Olive Ridley turtle is a vulnerable species and feeds on fish and a variety of marine invertebrates. Found throughout the tropics, this species is known for nesting en masse at some sites in Central America (Costa Rica) and India, when tens of thousands of females gather to nest on certain stretches of beach. This nesting event is known as an 'arribada'. This species has been hunted for its meat and, while relatively stable at some of the arribada regions, this species is struggling in other parts of its range. 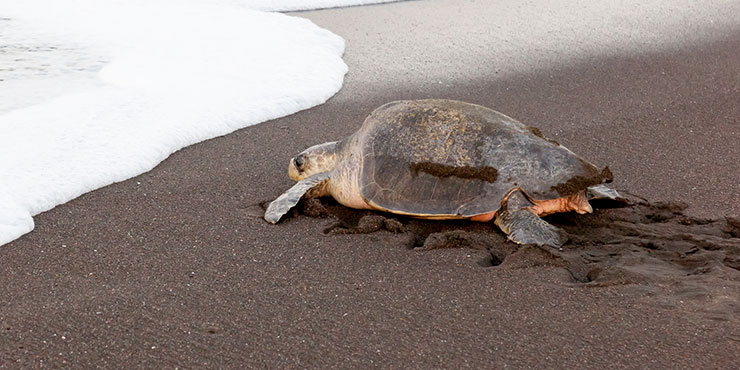 The Marine Conservation Society is the UK’s leading marine charity, working to ensure our seas are healthy, pollution-free and protected. You can visit their website to find out how to adopt a turtle, and for tips on reducing your plastic waste, beach cleans and projects.