The best beaches in Africa

After early mornings of getting up when the sun rises and heading out on exhilarating game drives, some unadulterated relaxation on the beach is very welcome post-safari. From South Africa to Zanzibar, there’s a surprising variety of Africa beaches hidden around this giant continent that’ll entice you to the coast.

Just 60 miles off the east coast, some of the best known beaches of mainland Africa encircle the island of Zanzibar in Tanzania. Water is warm and the beaches, well, they’re fringed by palm trees and dusted with some of the softest white sand imaginable.

Kendwa beach is the crown jewel of Zanzibar’s beaches; home to two of our favourite resorts:  Zuri Zanzibar Hotel & Resort and Gold Zanzibar Beach House. It’s found on the northernmost tip of the island and has masses of white sand, gorgeous sunsets and a perfect view of the translucent blue sea peppered with the odd dhow boat – which are made right on the beach. 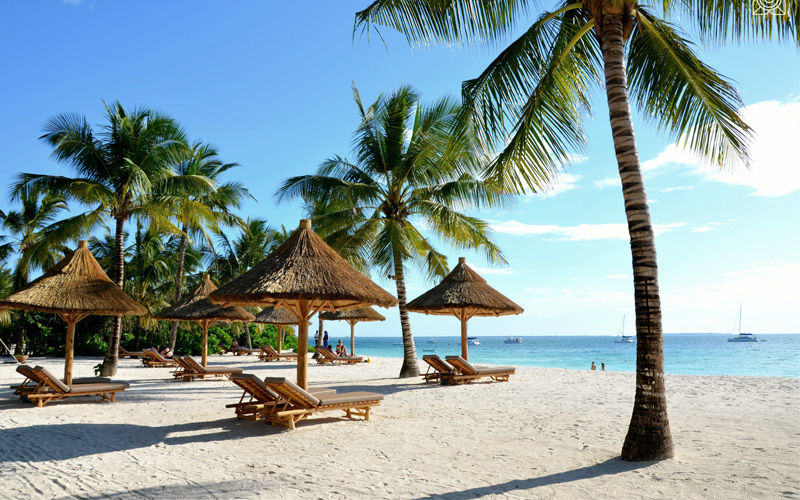 On the east coast, there are gentler waters at Bwejuu, Paje and Jambiani and spectacular beachfront accommodation such as Zanzibar White Sand Luxury Villas & Spa and Baraza Resort & Spa. Reachable by a short flight from Nairobi, Arusha, or Dar es Salaam, Zanzibar can easily be added onto your holiday after a safari in Kenya or Tanzania. For beaches with exclusivity, head to Pemba Island. Located north of Zanzibar, you can get to this unspoilt island by plane in around an hour from Dar es Salaam and half an hour from Zanzibar. The island is virtually untouched by mass tourism, with a relaxed and authentic vibe, spectacular diving and just handful of exceptional boutique hotels, such as The Aiyana Resort and Spa and Fundu Lagoon. 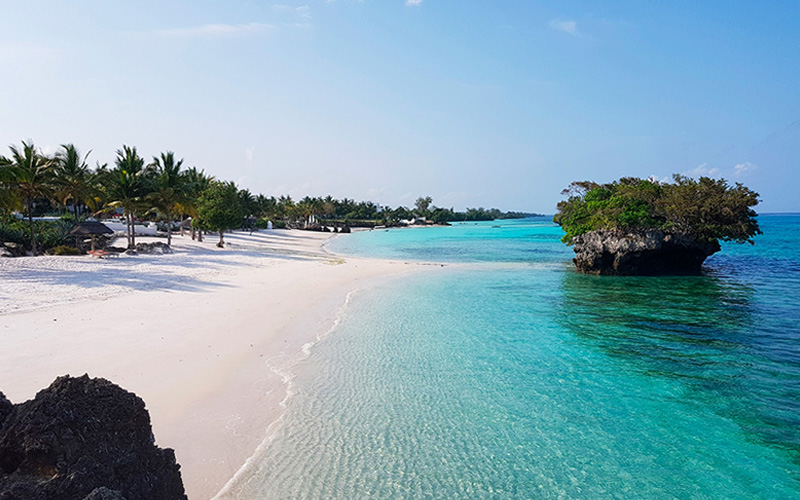 Best known for cosmopolitan Cape Town and safaris in Kruger National Park, South Africa is also home to incredible beaches the locals love to head to when they tire of the city. Camps Bay is just a 10-minute drive from central Cape Town, where the four Clifton Beaches attract A-listers and socialites with their pale golden sands and collection of cool restaurants and bars. To stay right on the beach, opt for The Bay Hotel on neighbouring Camps Bay Beach. If you’re keen on a swim close to Cape Town, just remember it’s the Atlantic, so colder than the Indian Ocean! 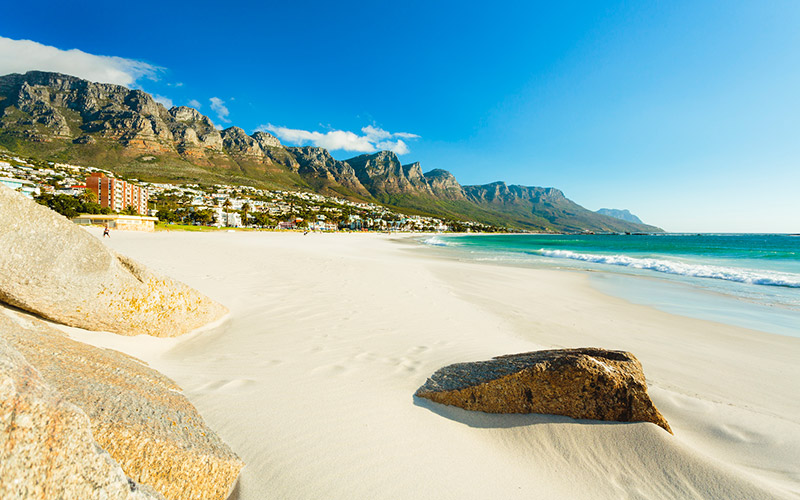 Further east on the coast along South Africa’s stunning Garden Route, Plettenberg Bay – or Plett, as it’s affectionately known – is a favourite with locals heading for the beach. Stay at The Old Rectory where from the back garden gate you can walk to the golden sands of Hobie Beach in just two minutes. For an exclusive ‘home-away-from-home’ try Cape St Francis resort, nestled in the dunes with direct access straight onto the beautiful Cape St Francis beach. On the other side of South Africa near Durban, The Oyster Box is a delightfully nostalgic hotel looking out to the iconic red and white lighthouse and the Indian Ocean beyond the rocky coast. There’s a swimmable stretch of the golden Umhlanga Beach a short stroll away when the waters are calm, and an infinity pool if it gets a little too rough. The hotel itself, as well as being a member of the Leading Hotels of the World, is regularly voted one of the best in South Africa in the TripAdvisor Travellers’ Choice Awards. 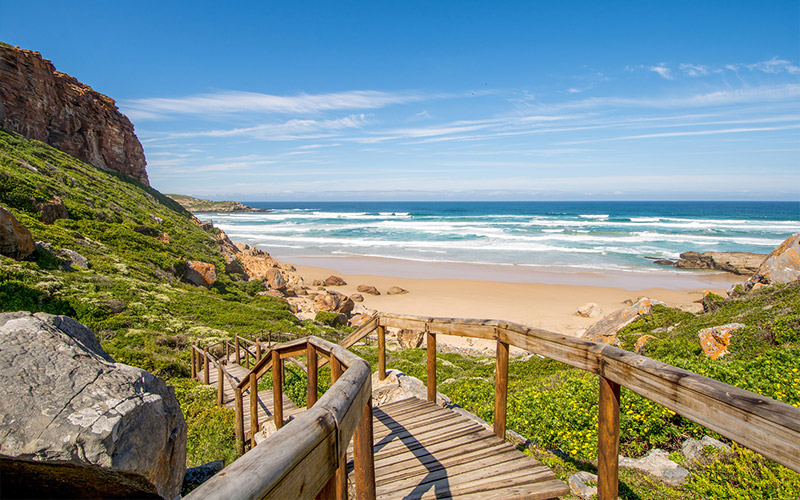 Worthy of a standalone honeymoon itself, the beaches of Mozambique are mind-blowing. From above, the ripples of sand mingle with the blue-green ocean in dreamy swirls and, on land, the fine, white stretches of sand are as exclusive as they are swoon-worthy. Because Mozambique is the very definition of an off-the-beaten-track African beach, you’ll pay more for the unparalleled exclusivity here. Combine it with South Africa with direct two-hour flights from Johannesburg to Vilanculos or direct flights from Kruger National Park in just over an hour – you could be tracking the Big Five on a game drive in the morning and be sipping cocktails by the ocean by sunset. 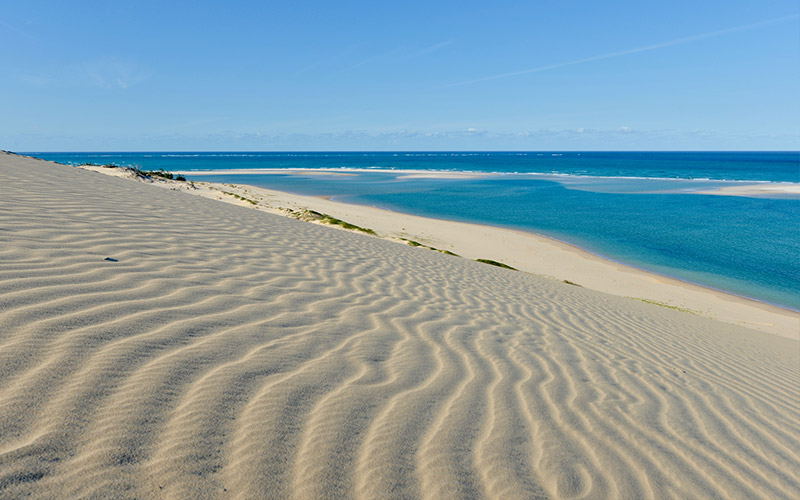 Opt for laid-back paradise at Machangulo Beach Lodge on the secluded Machangulo Peninsula (reached by an hour’s speedboat transfer from Maputo), where turtles, dolphins, humpback whales (mid-June to mid-October) and the rare dugong are found in the waters around the peninsula. Alternatively, head to Bazaruto Island in the Bazaruto archipelago, where you’ll find the gloriously romantic Anantara Bazaruto, the only hotel on the island.  You could trek on horseback along seemingly endless dunes or sail out to a secluded sandbank to search for pretty pansy shells, and then end your day in spa Jacuzzi at sundown with a glass of Champagne in your hand.

Travellers flock to Kenya from all over the world for one of the greatest wildlife shows at one of the most famous game reserves in the world: the Great Wildebeest Migration in the Maasai Mara (between August and October). If you want to combine this once-in-a-lifetime experience with a post-safari beach break, there’s no need to leave the country. On the south-east coast, there’s rich culture and white-sand beaches an hour’s drive south of colourful Mombasa. 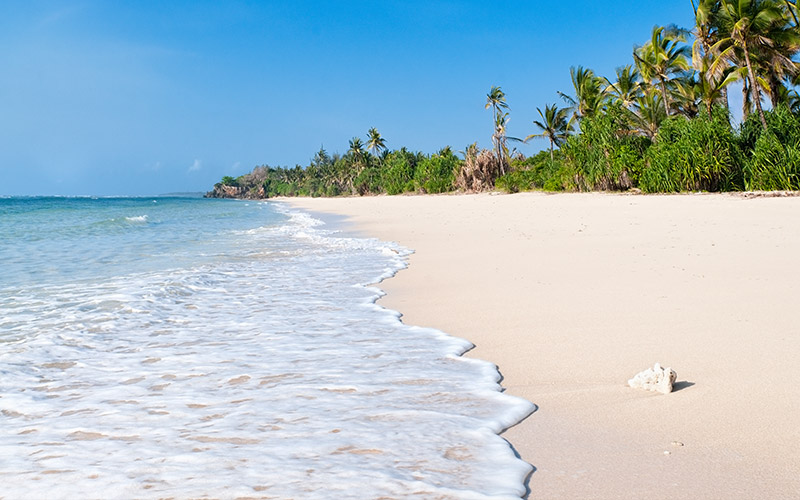 Diani Beach is the most famous beach around, with a seemingly endless stretch of pure, white sand and great accommodation including family-friendly and all-inclusive options. AfroChic is a standout property on a quieter spot of the Diani Beach; it’s an intimate, villa-style hotel with just 10 rooms and is part of the prestigious Elewana Collection. It’s around an hour and a half flight from the Maasai Mara to Mombasa, either direct or via Nairobi, or approximately six hours by road from the rich game reserves of Tsavo.

Alternatively, combine an Africa adventure with one of these easy-to-reach islands…

Gracing many a page in glossy travel magazines and ever-present in compilations of the best beaches in the world, the Seychelles is an Indian Ocean classic. The crème de la crème is Anse Lazio, a dazzling real-life postcard of tropical boulders, pretty palm trees and lots of velvety white sand that looks like it’s been carefully pressed into a soft sheet. At Grand Anse Kerlan, you’ll have the chance to watch hawksbill turtles hatch between October and February every year. Stay at Constance Lémuria where you’re minutes from the beach and can learn about conservation efforts from the dedicated turtle expert on-site. Be in the Seychelles in just over three hours with direct flights four times a week from Nairobi to Mahé, and in under five hours with direct flights from Johannesburg to Mahé. 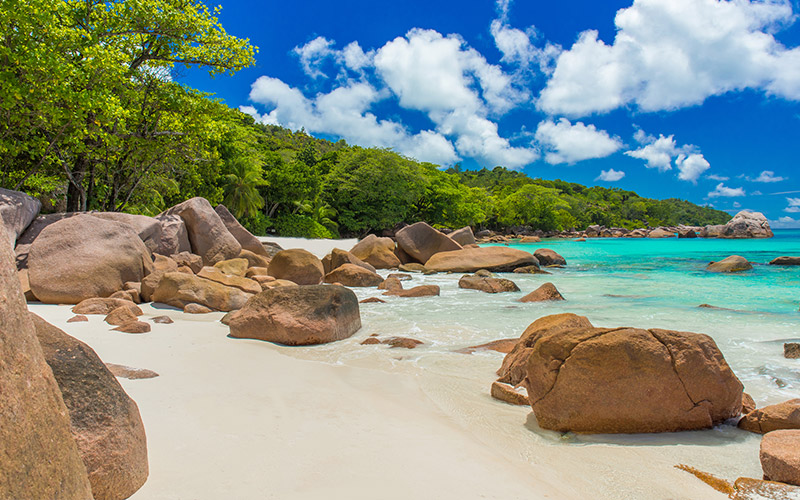 A gem in the Indian Ocean, Mauritius packs an unexpected punch of culture, outdoor activities and stunning beaches. You can eat mouthwatering Creole cuisine in vibrant Port Louis, play a round of golf to sensational sea views at Île aux Cerfs Golf Course and people-watch at lively Grand Baie Beach. There are plenty of all-inclusive options to choose from in Mauritius, so it nicely complements a safari where meals are already included, too. Choose from boutique and romantic hotels like Paradise Cove Boutique Hotel just 10 minutes from Grand Baie Beach and popular large resorts such as Heritage Le Telfair Golf & Wellness Resort. There are direct flights from Johannesburg and Cape Town, which take around four or five hours respectively, and from Nairobi in under four and a half hours. 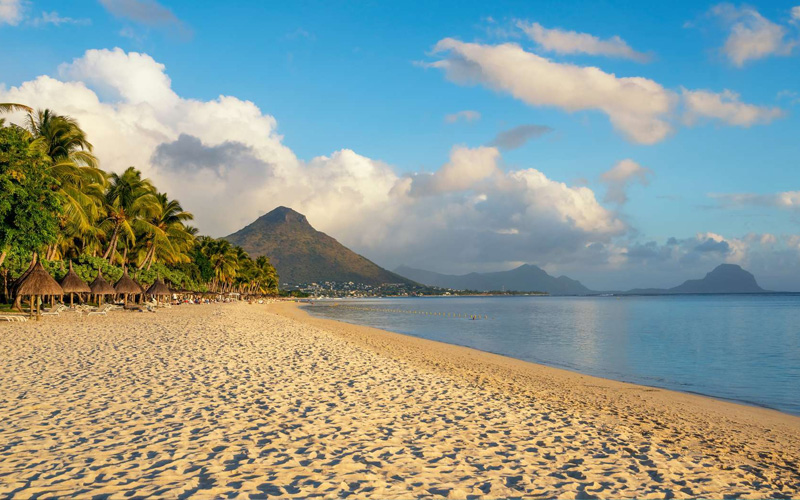 To plan an Africa beach holiday, make an appointment in your local Kuoni store, order our Africa brochure for more inspiration or talk to someone who has been to Africa by using our expert finder.

This feature was published on 20 Nov 2020. The information within this feature is correct to the best of our knowledge at the time of print. Feature by Chanel Diep.