At the southwest corner of the stunning island of Mauritius, there lies a breath-taking sight that seems to defy the laws of physics. Here, we attempt to explain the phenomenon of the underwater waterfall.

So first off, we should be upfront and honest here and let you know it’s not actually a flowing waterfall under the ocean, but a spectacular optical illusion that can be explained by the Indian Ocean’s fascinating geological history.

Mauritius is a relatively youthful island compared to much of the world and was formed around 8 million years ago (to put that into context, Earth itself is 500 times as old - at around 4.6 billion years). Volcanic activity under the ocean was the cause of the island’s formation along with other islands like La Reunion Island.

This group of islands now sit upon what’s known as a Submarine Plateau or Ocean Shelf. This shelf is no deeper than 150 metres below sea level and is the largest of its kind in the world. However, the ‘drop-off’ of this shelf’s edge plunges to depths of over 4000 metres into the abyss. The process you are witnessing in these incredible images is not the water itself falling, but the sand from the beautiful Mauritius beaches being forced off the plateau by oceanic currents. 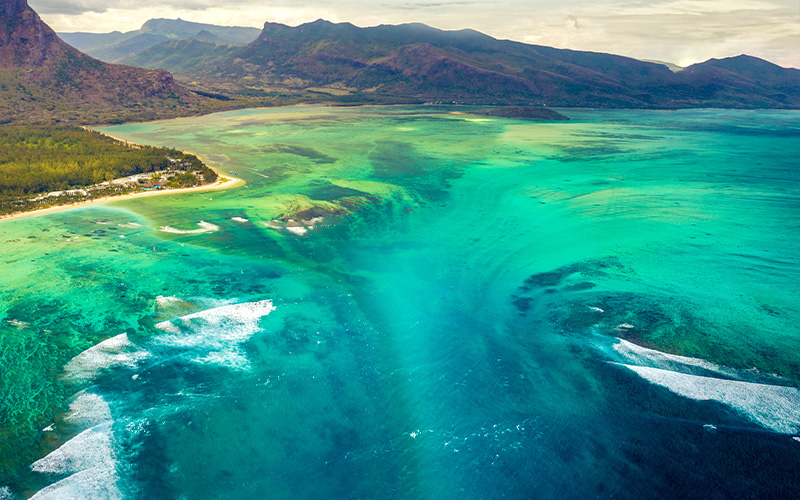 Whilst you can only see this incredible illusion from the sky via seaplane, this is not the only wonder of this part of Mauritius that the volcanoes of the past provided for us. From high above the shores atop Le Morne Mountain down to the flourishing coral reefs near the waterfall itself, there’s a plethora of stunning natural sights you can explore.

Perfectly positioned in the shade of Le Morne is the laid-back and effortlessly stylish resort of LUX* Le Morne. At this contemporary five-star property, you’ll be spoiled with the renowned LUX* service as well as little surprises throughout your stay. Don’t miss the ocean views from the exclusive-use treehouse perched in an Indian Almond tree, the dreamiest spot for a golden hour cocktail.

Want to keep active? Why not take a hike up Le Morne from the hotel and see the unparalleled view of the reef (and even part of the waterfall) from the 500-metre peak. If you’ve not got a head for heights, you could opt for a more grounded style of fitness with yoga on the beach or take to the water for a tranquil paddle boarding or kayaking session.

As fun as all that adventure can be, sometimes you just need to switch off and relax. On the LUX★ private island, Ile Des Deux Cocos, you can indulge in a castaway fantasy as you snorkel with tropical fish in the protected marine reserve and tuck into a barbecue of boat-fresh seafood. Or perhaps you’ll want to retreat to the LUX* ME spa, where you can completely unwind with a signature ritual or mood-enhancing treatment; we love the bamboo massage.

If you’d like to experience the top service and setting at Lux* Le Morne or want to discover more about Mauritius, read our Indian Ocean brochure or chat with one of our Personal Travel Experts who can share their first-hand recommendations.