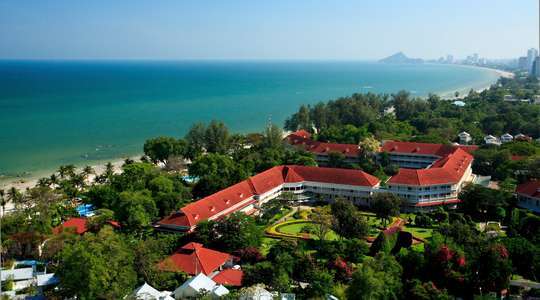 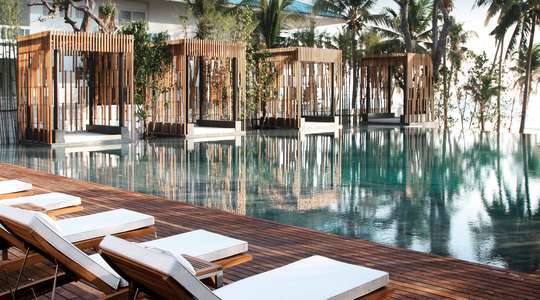 Fresh, chic and modern, it hasn’t taken long for this beautiful beachfront hotel to establish itself as a favourite among travellers looking for a property with style as well as substance. It’s in the centre of town yet offers direct access to a quiet stretch of Hua Hin’s main white-sand beach. The contemporary outdoor areas have comfortable sun loungers, cabanas and a saltwater swimming pool, all with stunning seafront views. Sit back and unwind in the hotel’s steamroom or sauna, or visit the Cape Spa which offers personalised treatments in a soothing environment. To learn more about Thailand’s fascinating culture, pick from the activities on offer including Thai boxing, cooking, massage, yoga and fruit-carving classes, as well the opportunity to give alms to the monks who walk the length of the beach each morning. The hotel has one award-winning restaurant, The Rocks Restaurant, for a variety of Thai, Asian fusion and international dishes. On the restaurant’s rooftop, you’ll find the On The Rocks Bar. It’s one of the best hangout spots in town to enjoy cocktails during the daily happy hour or a post-dinner tipple to views of the Gulf of Thailand. For a more intimate experience, have a romantic star-lit dinner on the beach. The hotel’s excellent location means that it also sits within easy reach of the town’s restaurants and bars, as well as the renowned night market. The suites here are among the most spacious and indulgent in Hua Hin, with each featuring a terrace complete with its own private plunge pool. Upgrade from one of the superb Sky Pool Suites to a Garden Pool Suite for access to your own small personal garden, or to one of the stunning Moonlight Pool Suites that are laid out over two storeys. 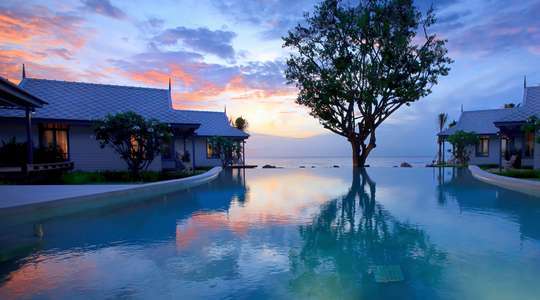 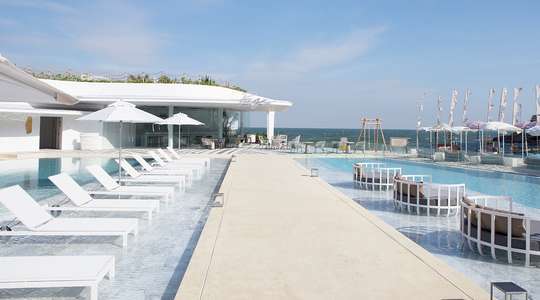 There’s a breezy, light-hearted feel to the newly opened VERSO Hua Hin that’s impossible to resist. Some of that is down to the location: right by the sandy beach at Khao Takiab, with a temple-topped mountain at the end of it to complete the scene. Then there’s the modern, airy architecture, whose clever use of curves and diagonals could have been inspired by some glossy superyacht. And there’s the interior design which takes its cue from the ocean, with a cool palette of white, blue and natural wood. It all helps to give this contemporary boutique hotel a trendy beach-bar vibe that’s a novelty for Hua Hin. Casual is the order of the day at the open-sided main restaurant, with wooden tables and benches to eat at and a perfectly pitched all-day menu of unfussy Thai and Mediterranean-style dishes. By the main pool, there’s also a sleek but still informal beach bar, an inviting spot for ice cream during the day and tapas and cocktails later on. There are actually four swimming pools in total, which are all superbly designed, and equipped with all the loungers, cabanas and sunbeds you could hope for - definitely one of the highlights of the resort. If that’s not relaxing enough, there’s also a fragrant spa where guests can experience a mix of traditional and modern therapies, from an authentic Japanese onsen thermal bath to a hot-stone massage. Finally, to keep the children amused while their parents have some me-time, there’s a small kids’ club offering games and activities. The maritime theme - mainly white with turquoise touches and driftwood art - continues in the 38 light-filled rooms, all of which benefit from picture windows. The Deluxe Rooms have an up-to-the-minute shower room plus a standalone bathtub on the balcony. Those with children will appreciate the Family Deluxe Rooms, which feature a cosy alcove with bunk beds that feels like a private den, but doesn’t have a balcony. Ocean Front Rooms live up to their name with beach vistas, and a free-standing bathtub by the large windows from which to enjoy them.