Third time I am staying there and it is always the same relaxing pleasure. Great rooms, great beach, very nice and helpful staff. I would only recommend Park Hyatt to open an additional restaurant, as waiting list is not ideal in the Beach House at night

by lorelani Canton of Zurich, Switzerland

Beautiful, in most aspects very well maintained hotel, especially the common areas. Enchanting beach and sea. Very friendly and helpful staff. Food quality above average, high beverage prices like in other comparable hotels. Despite Covid restrictions good solution at the buffet, where the employees serve you the food at the various stations. Maybe tagging the various food would have helped in some situations. Service slightly slow in the evening at the café, exceptional in the mornings and at the Beach House. Special thanks to the waitresses Paulina and Mary Love. Beautiful villa with only a few worn off details. Not so perfectly soundproofed. Thanks to Majory and Khem who throughly cleaned our villa. Unfortunately our private pool’s water supply broke down 3 times during our 4-day-stay, though it was quickly attended to each time. Slight disorganization and miscommunication respectively regarding administrative concerns (Check-out proceedings in general and organization of the late Check-out). Traveling with FTI travel agency not recommended!! Thank you for a very relaxing vacation!

The resort is nice but the room set up was a bit awkward cuz the shower room and bath tube was not separated. The big heavy lamps near the bed side should be replaced cuz it caused unexpected issues like I was scratched my finger when the lamp fell. Masks mandatory should be carried out when during buffet breakfast.

How to waist money or just poor customer service

The most amazing 7 night stay at this beautiful hotel. Facilities were excellent, Covid provisions very good but enabled the whole experience to still be relaxed and high levels of service etc. Special mentions to Amour at the pool who was attentive and really helpful, Valentino and Jay who make the best cocktails and come up with the perfect suggestions to suit the taste and mood and then Collen, Zouhir and Louie at the beautiful Beach House restaurant - great service, attentive, friendly and the best service you could wish for. 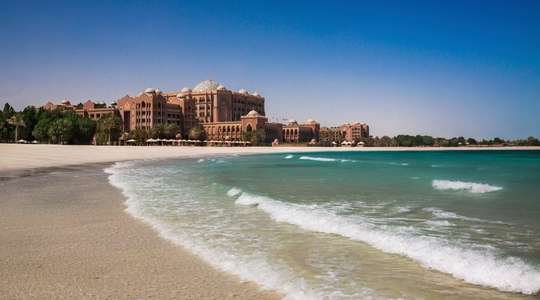 This grandiose palace evokes a sense of space, style and sophistication throughout. As you make your way along the sweeping driveway, the dancing water fountains in the distance guide you to a marble-domed lobby decorated with palm trees, Rolex clock faces and doors with Swarovski crystal-encrusted handles. There’s waterskiing and stand-up paddleboarding at the watersports centre and a lazy river to keep younger guests entertained, while the expansive grounds create plenty of seclusion and privacy for couples at spots like the award-winning Emirates Palace Spa. There’s a real passion for cuisine, with a choice of 14 restaurants serving everything from al fresco barbecue and contemporary Chinese to Lebanese fare. Dining at Mezlai is highly recommended – it’s the UAE’s first Emirati restaurant. Simple yet elegant, the Coral Rooms have all the superior facilities you would expect from a luxury hotel, with pretty views over the gardens and out across the Abu Dhabi skyline. Pearl Rooms have partial Gulf views while Diamond Rooms provide uninterrupted views over the Arabian Gulf. The Khaleej Suites are truly indulgent with extensive living space. 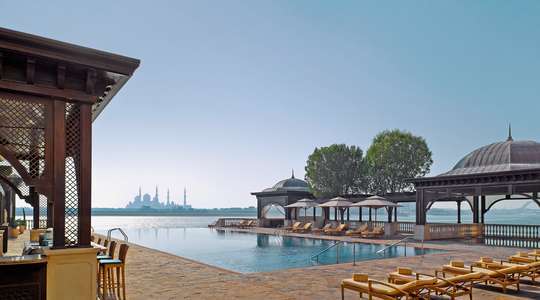 Part of the acclaimed Qaryat Al Beri complex, this impeccably stylish hotel’s grand Arabian architecture sits on a private seafront. It’s an ideal base for combining a beach stay and Emirati culture; visit the stunning Sheikh Zayed Grand Mosque, or board an abra, a traditional wooden boat, and float along the waterways, or visit the nearby Qaryat Al Beri souk. At Sofra Bld, the hotel’s main restaurant, enjoy fine buffet dining from across the globe, with award-winning cuisines from South-East Asia, the Mediterranean and the Middle East. The focal point within the complex is the splendid CHI, The Spa, where you can relax with a Signature Asian Blend Massage that combines techniques like Chinese energy flow and Thai pressure points. After your treatment, take advantage of the spa facilities for ultimate relaxation. Feel at home in the traditionally decorated Deluxe Rooms, with a private balcony overlooking the sweeping canal. For extra space, book an Executive Suite which features a separate living area and complimentary access to the Horizon Club. 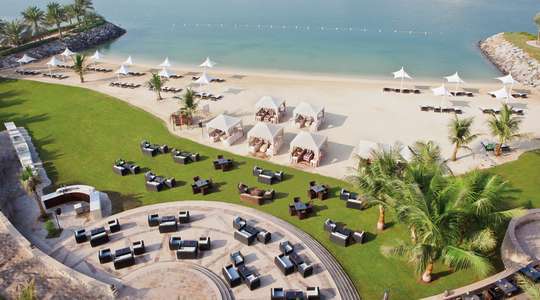 Part of the expansive Qaryat Al Beri complex and the Shangri-La group, Traders is a contemporary hotel. The hotel’s private beachfront is home to plush cabanas that fringe one of Abu Dhabi’s many canals. The urban-chic Afyä restaurant and bar serves a variety of international buffet and à la carte meals. As well as a fitness centre and outdoor swimming pool on site, there's the fantastic CHI, The Spa at Shangri-La, at the neighbouring Shangri-La Hotel Qaryat Al Beri (at extra cost). The cuisine here is international, meaning all guests are catered for. If you wish for a change of scene, reserve a table at one of the restaurants at Shangri-La Hotel Qaryat Al Beri (payable locally). The rooms have views of the canal or the city with Superior Rooms generously sized and Deluxe Rooms providing additional living space. If you choose a Traders Superior Room, you'll have free access to the exclusive Traders Club Lounge with benefits including express check-in/out, a range of complimentary refreshments throughout the day and cocktails in the evenings. 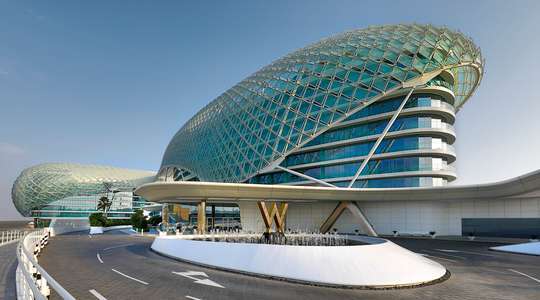 This revitalised W Abu Dhabi – Yas Island reflects the dynamic energy, passion and contemporary flair of the Grand Prix and updates traditional and locally inspired design elements with an uber-modern style. It’s been ergonomically designed to create a unique yet comfortable atmosphere. An impressive LED-embellished lattice-style canopy greets you by night and shades you from the sunshine by day, acting as a vital component of the hotel’s awe-inspiring architecture. While the initial focus here is on its architecture, it’s the hotel’s location on a Formula 1® track that makes its guests return each year. There are three fantastic restaurants to choose from; dine on dishes from around the globe at Garage, eat classic Italian at Amici and order poolside snacks from SUN Deck. A shuttle bus service takes you to numerous attractions including Yas Waterworld, Ferrari World Abu Dhabi and Yas Beach – all just minutes from the hotel. The spacious rooms each feature vast floor-to-ceiling windows for sweeping views out across the marina, the Formula 1® track or the hotel’s canopy. For couples, Wonderful Rooms are ideal with modern facilities including custom-designed furniture and mood lighting. Fantastic Suites come with plenty of additional space in a separate bedroom and spacious living room. 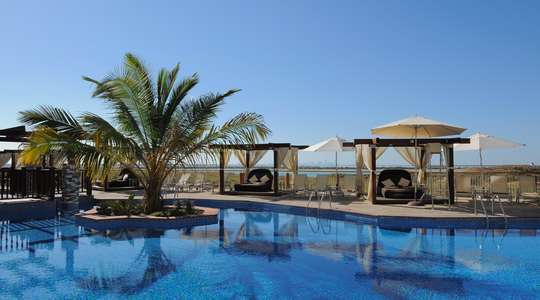 Just minutes away from Yas Links Golf Course, the white sands of Yas Beach and thrilling Ferrari World Abu Dhabi, this chic hotel has easy access to some of the island’s most popular highlights. The pool area is calm and relaxing, making it the perfect spot to take a break from the lively F1 atmosphere of the island. Shams Pool Bar is a great place to enjoy the sunset, while Assymetri offers cuisine from around the globe, with chefs displaying their culinary skills at live cooking stations. Filini also has a lively show kitchen, serving up delicious Italian fare, while the Belgian Beer Café takes on a cosy 1920s setting. Standard Rooms are welcoming and comfortable, with views of either the glittering Arabian Gulf, famous Yas Marina Circuit or the lush greens of Yas Links Golf Course. Upgrade to a Superior Room for a balcony from which to enjoy your splendid view of the Arabian Gulf. 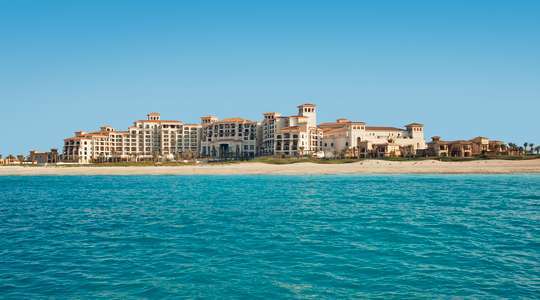 Contemporary interior design and thoughtful Mediterranean architecture characterise this luxurious hotel that’s filled with natural light. Found on Saadiyat Island, this is the perfect retreat for those that want to laze on pristine white sands while enjoying convenient access tothe city's numerous attractions. Modern touches add to the pristine feel of the hotel and elegant traditional Arabic elements offer a subtle reminder that you’re in Abu Dhabi. The cuisine available here is spectacular, with a range of flavours from around the world on offer. In keeping with the decor, Oléa presents a Mediterranean menu in a panoramic ocean view setting, while Sontaya is set among a series of floating pavilions, serving indulgent Asian-fusion dishes, and The Drawing Room offers up irresistible sweet treats. Buddha-Bar Beach follows the same concept as the seasonal Buddha Bars found on glamorous Greek islands, Santorini and Mykonos. Dine on delicious Asian dishes in the day and enjoy the unique night brunch concept which starts at 7pm on Fridays. Heading back to your room, you’ll find a comfortable and luxurious retreat where the hotel’s sense of Mediterranean ease continues.