This rustic camp is one of just a handful of camps in the exclusive Lewa Wildlife Conservancy.

This safari camp is one of a kind. Located in a UNESCO World Heritage Site, it benefits from the active conservation efforts of the Lewa Wildlife Conservancy. There are currently 137 black and white rhino, which makes for superb game viewing, and the conservancy also has the largest concentration of Grévy’s zebra in the world. Owned by the local community, Lewa Safari Camp’s profits are directly reinvested into conservation and community efforts – this means your stay here will help to continue this vital work and protect some of Africa’s most vulnerable wildlife.

Prepare for a near-private safari experience – the outstanding feature of this camp is that the strict tourism limits means you rarely have to share viewing areas with other vehicles. You can even meet the Head of the Anti-Poaching Unit and learn about how they look after the area and its inhabitants (at extra cost). The conservancy covers 65,000 acres; it’s a vast wilderness with habitats that include pristine forests, grasslands and woodlands with views of Mount Kenya.

Within the camp, there is everything you might need for a comfortable stay. Rise early for a bush breakfast and game drive, perhaps viewing the same wildlife that Duke and Duchess of Cambridge might have seen on their visit when they famously got engaged in Lewa Wildlife Conservancy in 2010. Relax by the log fire in the lounge and indulge with home-made cakes at afternoon tea before returning to your large, thatched tent, designed with simple rusticity and an emphasis on the abundant space. Groups are well catered for with two family tents which each sleep up to five people.

• See the dazzling views on a canopy walk in the Ngare Ndare forest* • Enjoy an near-private game drive • Go horse riding out on the open plains*. 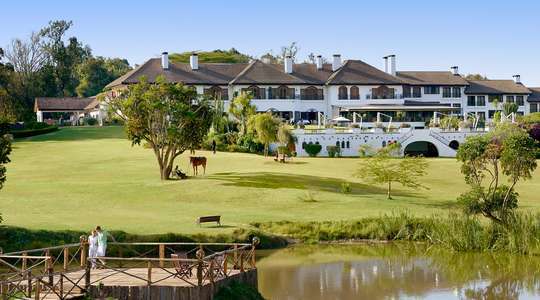 Founded by the 1950s American actor, William Holden, and counting Winston Churchill and Bing Crosby amongst its former members, this refined club makes for a unique base from which to explore the region. Today, the original colonial building houses most of the facilities and rooms. Tusks is the signature restaurant, with views from the terrace over the sprawling gardens to Mount Kenya and offering a diverse gourmet menu that showcases local produce. At the casual Zebar, your waiter will need to cross hemispheres to take your order! The afternoon tea here, served on the lawn terrace, comes recommended. There’s a pool bar and the Mawingo Room – an exclusive private dining venue set around a wood-burning fireplace with a collection of photos featuring actors from yesteryear. You’re welcome to spend your days here as you please, taking it easy by the pool or immersing yourself in activities from golf to mountain biking. There’s also a new health and fitness centre. Tastefully furnished traditional rooms are housed in the main building, with a sitting area, fireplace, bathroom with rain shower, and views of the gardens or towards Mount Kenya. A range of suites are more spacious, some located in the original building and others in cottages throughout the grounds. The charming William Holden Cottages are simply huge, with their own private lawn area. 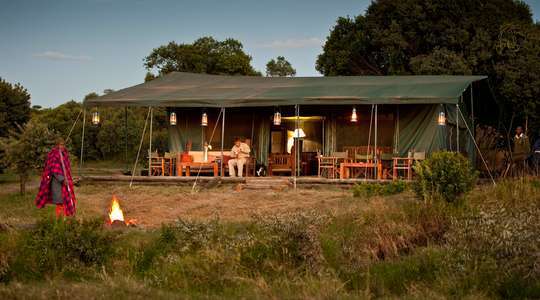 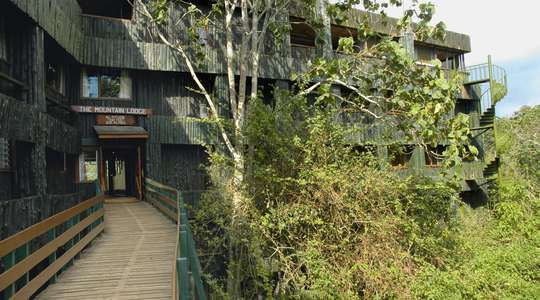 At this peaceful Serena-managed tree lodge – at an altitude of 2195 metres and reached by a timbered drawbridge leading up from the forest – it’s all about appreciating the sweeping views and the wild African sights and sounds. You’ll be able to see the jagged snowcapped peak of Mount Kenya and, thanks to the natural waterhole and salt lick, there’s abundant wildlife viewing from the lodge itself. Watch from your balcony, pull up a seat at the viewing deck in the bar, head up to the rooftop or down to the photo hide (reached via a tunnel and offering spectacular photo opportunities) as bushbuck, buffalo, herds of elephants and the occasional leopard come to drink. The waterhole is floodlit at night, and the lodge offers a lovely wake-up call service if you’d like to be woken when a particular animal makes an appearance. Buffet-style meals are served in the atmospheric gallery dining room, which sits at tree-level to showcase the views over the forest canopy, and where the dining chairs are hand-crafted, each with a different animal carved into the back. For pre and post-dinner drinks there’s a comfy wood panelled bar area with a fireplace and viewing deck. Cosy chalet-style rooms are furnished from indigenous wood and feature authentic African artwork. All rooms have a terrace that overlooks the lively waterhole below. 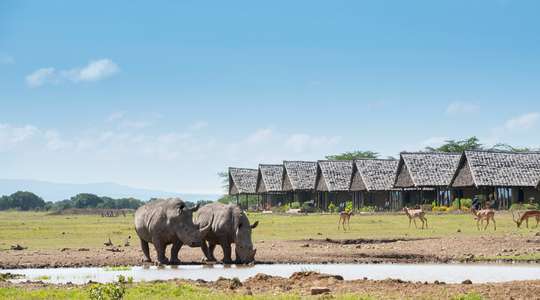