spent 4 nights at this resort ending on21st January, We had an excellent time. The room was very clean and welcoming. The staff were incredibly helpful and very attentive. the pool area was a very calm and relaxing place. the food was good quality. The grounds were very well maintained and a joy to walk through.

When I chose The Sailing Club, for my holiday destination, I did do a good deal of research to find a high class hotel, that ticked all the boxes. I was looking for a hotel that offered peace and quiet, with a high standard of service and luxurious surroundings. With The Sailing Club, I wasn’t disappointed. From walking into reception, the whole place is quiet, tasteful, and tranquil. To be honest, very different to the very lively street outside, that the hotel is situated on. The gardens within the hotel grounds are (as mentioned by other reviewers) beautifully maintained whilst still retaining a natural feel. The bar and pool areas are also well maintained and tasteful, and Sandals restaurant also lives up to its reputation, with really high quality food and great service. You will pay around double the price at Sandals that you’d pay in the numerous restaurants on the main road outside the hotel, but it is still very reasonable by UK standards and well worth the extra cost. We mixed it up a bit and had some meals at Sandals for around £60-£80 (for 2 people, including drinks), and some on the main “strip” for £20-£50, with the most expensive outside the hotel including a whole lobster, bottle of wine, cocktails, and a taxi back (taxi fare £2). Yes it really is that cheap! As mentioned in most reviews, Nikki was very friendly, attentive and helpful, and dealt superbly with the couple of minor issues that we had. All of the rest of the staff (unfortunately too many to mention) , were lovely too. From the reception staff, maids, gardeners, bar, waiting and spa personnel, everyone was cheerful, friendly and polite (a true credit to the hotel). One special mention though, Lee, the guide/translator (employed by the hotel) who took us on 2 trips, was just fantastic. Polite, engaging and just a really lovely guy, who remained cheerful and enthusiastic throughout both of the trips that he took us on, despite the fact that he must have done the same thing, countless times. Lee, you’re a credit to the hotel, and your country. Thanks, and it was a pleasure to meet you. We had a room on the upper level, with its own private terrace and outdoor shower (perfect way to start and end each day!). It did feel very private, and we were glad we chose this type of room, as some of the rooms on the lower level, were a little more open to the public paths, and their terraces were a bit less discreet. Everything about the hotel is honestly first class, and having walked through the grounds of several others, during our stay, we were really pleased that we’d chosen The Sailing Club. Now for the not so good part. Thought I must say that this is no reflection on the hotel, which I’ve already said, is superb. Basically, the hotel is an oasis of calm, in a fairly tacky resort. Once you step outside of the hotel grounds, you’re in a completely different environment. One of noise, hustle and bustle, bars restaurants and souvenir shops. Not a bad thing necessarily and I fully appreciate that Vietnam is a developing country, but the worst part about it is that the resort is being taken over by Russians. I really hope that TripAdvisor will allow me to say this, because it is relevant and not something that is said in the brochures. Not only us, but other visitors, and shopkeepers found them loud, rude, I’ll mannered and unpleasant, especially to the staff. One local shopkeeper told me that lots of the local businesses are now Russian owned and that in 10 years, the resorts tourists had gone from 10% Russian to 90% tourists. That might be an exaggeration, but the majority here are definitely Russian. Also, lots of the bars, restaurants and shops have Russian staff and you can’t walk far without having a leaflet advertising a bar thrust into your hand by a Russian. This might not be a problem to everyone, and if you like rude people with no social graces, terrible dress sense and cheap botox, this resort will tick all your boxes. To summarise, the hotel is fantastic, and I can’t give it less than 5 stars. It’s just the right hotel, in the wrong place. Then, again, you’d pay a lot more for this type of boutique hotel in other parts of the world, so I guess, you pay your money, and take your choice. I just hope that The Sailing Club continue to do what they’re already doing, and don’t lower their standards, which would be very easy to do here. We probably stayed in the resort for too long, but if you’re travelling through Vietnam and looking to spend a few days here, you really couldn’t do any better than staying here. Thanks again to Nikki and all of the staff, who welcomed us, and made our stay here so enjoyable.

Came twice: once just for drinks, the second time for dinner. The staff is very friendly and attention to service is unparalleled to what you find usually in Mui Ne. Really makes a difference! The food! Where to start? It is simply amazingly good. Essentially anything on the menu is so tasty and I admit that I was looking for mostly western cuisine whenever I went. Nothing disappointed. The cocktails are a treat (happy hour sadly only last one hour, but the deals are good) and the presentation is fantastic. The interior design of the hotel and restaurant is so aesthetically pleasing, my partner and I kept taking photos of how beautiful everything was organized. Attention to details in the design was wonderful, the place is just stunning. Would highly recommend anyone to come here for a drink overlooking the sea or for a dinner!

I was not staying at the hotel due to the fact that they were fully booked but went there every evening for dinner. The food was really good and the menu had a great variety of dishes. The staff was really lovely and the hôtel was really well maintained and beautiful.

Just simply perfect in every way

We have been coming to mui ne for 10years...(we are not typically habitual people but we fell in love with this little town). We have previously visited the sailing club for food on many occasions. We decided to stay there this year and it is truly the most pretty peaceful calming place you could wish to stay in mui me. The grounds are so pretty you are surrounded by tropical plants. The rooms... They are spacious and quiet.... soooo quiet ...and exceptionally clean. The mattresses in Vietnam can be a little on the thin side even in the high end hotels and the pillows can be a tad hard. These beds were a great size (close to a king size) and so comfortable in every way. The staff... They are attentive and very friendly but not over bearing. The food...... As someone who has to eat healthy and has to avoid MSG in food (which can be difficult in Vietnam) the food at sailing club is by far some of the best food we have ever tasted (we have been fortunate to travel to many countries). They do the basics so so well like omelettes the presentation the seasoning everything is just so tasty!. They do quinoa porridge and green juices and turmeric lattes the choices for food was so great. We ate there many times during our stay (a rarity for us we like to go out and explore)and every single dish was so enjoyable. It’s one of those places that really does tick every box you just don’t need to go outside of the hotel. A truly relaxing place you can go and reset. 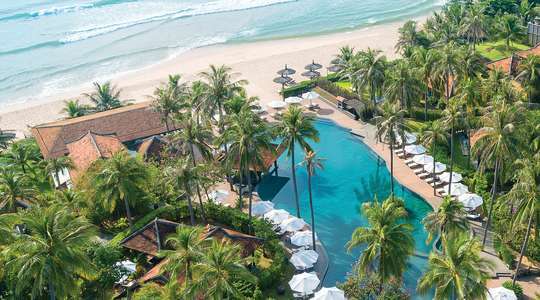 Anantara is known for its warm service, and staff go out of their way to ensure you have a memorable stay. Lotus ponds and lofty palms create a tranquil setting and the resort has signature dark wood and cream furnishings. Breathe in the revitalising scent of lemongrass as you indulge in a replenishing treatment at the spa, tuck yourself away in the reading lounge, or bask in the sun by the freshwater lagoon set amid tropical gardens. Stop by happy hour twice a day at the pool bar and Cham Lounge with a refreshing mango juice or passion fruit margarita. Try Vietnamese or western-fusion cuisine created with fresh produce and subtle seasoning at the fine dining L’Anmien Restaurant which overlooks the lagoon. Dine under the stars at Thung which offers stunning sea views and a romantic setting for fine seafood and premium steaks. There’s also a poolside bar serving light meals. In the evening head to the elegant Wine Room to combine fine wines with mouth-watering bites or sip cocktails at Cham Lounge. The elegantly designed rooms are all spacious and nestled in the lush gardens. Deluxe Rooms are in the main building with garden views. Deluxe Ocean Rooms are larger with sea views. One Bedroom Pool Villas have the added luxury of a private pool and dining pavilion – perfect for honeymooners in search of a tranquil escape. Mui Ne Two Bedroom Suites are good for families with older children.