im always impressed everytime i stay @ the palomar in philly.. this time i was celebrating a friends bday and of course the check in process was excellent. special shot to Wadiyah whos makes it friendly and genuine, you can never go wrong @ hotel palomar. thank you

The service was excellent and the premises were immaculate; fit for a queen! I really enjoyed the service from the front desk. Mrs. Wydiah treated us like royalty! The fireplace cocktail hour was a really nice touch. I do plan to come back. Thank you so much for helping to make my birthday weekend so special at the Palomar.

Stayed for 2 nights in a city view spa room. The spa tub is the perfect size for a couple and the upgrade for the view is totally worth it- beautiful sunset and city lights at night. Can’t wait to come back! Because of covid some amenities were limited - mini bar is locked (can’t use it as a fridge); no robes in the room. Not sure if you asked for these things specifically they would be available by request. Fitness center is closed. Housekeeping does not come in daily- fresh linens by request. Wadiyyah gave great service at the front desk and staff were so quick and accommodating with requests for fresh towels, etc to the room. Thanks for an amazing stay!

We had an amazing stay at Kimpton Hotel

We had an amazing stay at Kimpton Hotel Palomar Philadelphia. Beautiful hotel and excellent service. The hotel was clean, modern and had all the amenities we are used to. I would highly recommend it. This certainly won't be our last stay. 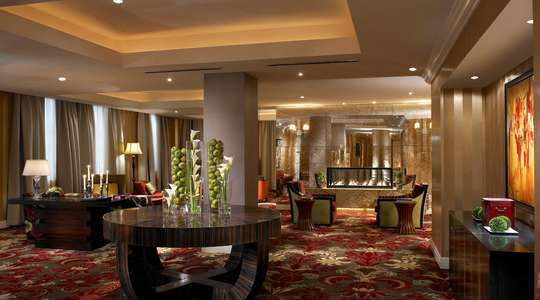 This stylish hotel sits inside a restored 1906 Beaux Arts building on the old B&O Railroad Headquarters. A nod to the Gilded Age brings marble staircases, chandeliers, 5 o’clock wine hour and a relaxed American brasserie. Rooms are chic and spacious with oversized baths, Italian sheets and bunk beds for kids. Close to the famous Inner Harbor, you’ll enjoy waterfront dining, Historic Ships in Baltimore and the National Aquarium. You can even request an in-room goldfish for the duration of your stay.