There are very few – if any – places in the world where you can say you have stayed in a pyramid. As is often the case, Las Vegas offers a unique experience and brings the icons of Egypt to the Nevada desert. At over a 100 meres above Las Vegas this hotel really is an impressive sight. Add to that the huge Sphinx at the entrance you have one of the most striking and recognisable resorts on the Strip. There is a huge array of entertainment on offer including the Criss Angel Believe Cirque du Soleil illusion and magic show, the world famous Blue Man Group and the Bodies and Titanic exhibitions. The pool and pool deck at Luxor is one of the largest in Las Vegas and here you can hire a poolside cabana or a day bed. There’s also a spa and fitness centre on site and the Las Vegas Monorail starts at the hotel, making exploration of the Strip a breeze. Among a choice of nine restaurants are the Pyramid Café, which offers tempting options for breakfast, and lunch, and TENDER steakhouse which serves steak and seafood. Mexican dishes and drinks are available at T&T (also known as Tacos & Tequila), Asian specialities are served at Rice & Company, while the traditional Las Vegas buffet can be enjoyed at More the Buffet at Luxor. There are further restaurants at the Mandalay Place complex including a Burger Bar and an Irish pub-style venue. One of the largest and most famous of Las Vegas’ nightclubs LAX is located here as are a selection of bars and lounges. As the name would suggest Pyramid Rooms are located within the 30-story original Luxor building. To reach your accommodation you will take one of the inclinator lifts which travel up the side of the pyramid. Pyramid Deluxe Rooms have either two queen size or a kingsize bed and each room features a sloping window wall. There are further rooms located within the more modern Tower which are available on request.

Fronted by an eight acre lake and sitting at the heart of Las Vegas’ Strip, the Bellagio is a palace of overstated luxury inspired by classic European design. Each day hundreds of visitors line the edge of the lake to witness the legendary dancing fountains, choreographed to classic tracks such as Viva Las Vegas and Billie Jean. However, although it may be best known for its fountains, Bellagio also features the beautiful Bellagio Conservatory and Gardens and is home to one of Cirque du Soleil’s most popular shows, the aquatic-based performance ‘O’. The casino here is a great place to witness some high stakes play while at the Promenade and Via Bellagio you can take part in another of Vegas’ most famous pastimes – shopping. There’s no shortage of drinking and dining options here with a host of celebrated restaurants from high end to casual offering a culinary journey around the world. One of our favourite fine dining venues is the French restaurant Le Cirque, which is a popular pre-theatre dinner spot. Other cuisine options include Japanese, Italian, American and Far Eastern, and then of course there’s a main buffet restaurant – a staple of Las Vegas dining. The Bellagio doesn’t disappoint when it comes to post dinner entertainment with fantastic nightlife options. There’s the spectacular ‘O’ and the two nightclubs The Bank and Hyde Bellagio, the latter offering views over the iconic fountains. The rooms and suites here have recently been renovated and they feature a modern and vibrant design. The Resort Queen Rooms are located within the main tower and have a design that’s inspired by the Bellagio Conservatory and Gardens. We highly recommend upgrading to either a Strip View Room, which is located in the Spa Tower and has partial fountain views, Fountain View King Room that's set in the Bellagio Tower with full fountain views. Watching the fountains from your room has to be one of those unique Las Vegas experiences. There is also a selection of other rooms and suites which are available on request.

Not every hotel in Las Vegas needs to be all about high energy entertainment – there’s plenty to be found along the Strip. Sometimes you may be seeking something a little quieter than the party palaces for which Vegas is renowned. That’s where the Vdara comes in. This non-gaming, non-smoking resort is a glittering beacon of style and sophistication, offering an extensive two-storey spa and one of our favourite spots, the chilled Pool & Lounge Vdara. What’s best is that you’ll just be a short distance from the ARIA Resort & Casino, and its extensive facilities, casino and entertainment yet you can return to the relative calm of the Vdara at the end of your days and nights of exploration. The onsite restaurant, Market Café Vdara, is a casual venue serving classic Americana dishes. Here breakfast is served all day – time often has no meaning here in Las Vegas – and there are both classic dishes and light bites available for breakfast and lunch. There’s also a gluten-free and vegan menu available. As all suites feature at a kitchenette, or even a full kitchen and dining area, you may wish to cook for yourself with produce from the small Market Café grocery store. Just a couple of minutes’ walk away there are the numerous restaurants and bars at ARIA offering cuisine from around the world. The accommodation here reflects the modern yet elegant style of the resort with interiors conceived by top interior designers. The Deluxe Suites feature a living area, dining table and kitchenette and large picture windows. For a supplement you can choose to upgrade to a Deluxe Lakeview Suite for incredible views over the Bellagio Lake and Fountains. For a little extra space we recommend a Vdara Suite which has a separate living room and kitchen with hobs and a full size fridge. 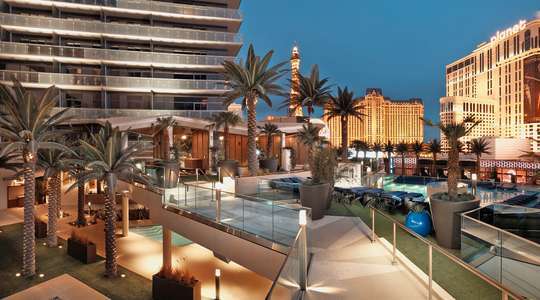 The Cosmopolitan of Las Vegas 5

The Cosmopolitan of Las Vegas

Nothing in Las Vegas is ever going to be small scale, and The Cosmopolitan lives up to Sin City’s larger-than-life reputation with cutting-edge design, pink chandeliers, seventeen restaurants including Zuma and Momofuku, a casino, three swimming pools and a spa. Rooms are chic, stylish and offer incredible views. You’re located right on The Strip just steps away from the Bellagio fountains and a short walk to Miracle Mile’s shops.

New York New York is a city within a city, where replica landmarks from the Big Apple such as the Statue of Liberty and the Brooklyn Bridge on the internationally-inspired Las Vegas Strip. This is one of the city’s most family-friendly properties with attractions such as Hershey’s Chocolate World Las Vegas and The Big Apple Coaster – which winds its way past iconic replicas such as the Empire State Building and the Chrysler Building and past the Statue of Liberty – located onsite. Due to the hotel’s locations at the busiest spots on the Strip you will really feel a part of the action – New York-New York is a short walk from Excalibur hotel and Casino and across the street from MGM Grand Hotel & Casino. The New York theme continues throughout the resort with Big Apple-themed eateries, bars and lounges such as the recently opened Tom’s Urban and Shake Shack. There’ll be even more dining options at the brand new complex The Park when it opens fully in 2016. The Brooklyn Bridge is a popular spot and there’s often live blues, guitar or even Celtic music in the afternoon and evening and DJs playing until late on a Friday and Saturday. The rooms are simple in design and are located in the different famous New York buildings that make up the hotel. Park Avenue King Rooms face the back of the hotel while Park Avenue View King Rooms overlook the Strip. Rooms that have Strip views also may be next to the rollercoaster which runs until 11am or midnight so if you’re not a night owl it may be worth choosing a Park Avenue King Room. For slightly more space choose a recently renovated Madison Avenue King Room. 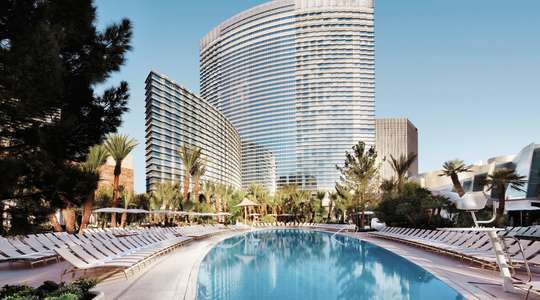 The beautiful ARIA Resort & Casino is one of Las Vegas’ new band of ultra-modern resorts which are redefining ‘Entertainment Capital of the World’ as a true 21st Century city. Offering a combination of striking architecture, unrivalled hospitality, sustainable design and cool accommodation the hotel is a perfect alternative to the more traditional hotels that line the Strip. Throughout the hotel there are striking art installations, created by artists such as British sculptor Henry Moore; there are also water features all of which combine to reflect its modern style. Three ellipse shape pools offer somewhere to cool off when the mercury rises and The Spa & Salon is a tranquil retreat following days of shopping or sightseeing. Providing eclectic dining options is a real focus at the ARIA, with classic French cuisine on offer at Bardot, Spanish tapas at Julian Serrano, ocean-to-table dishes at Herringbone and Pad Thai at Lemongrass. Twelve further dining venues as well as 10 bars and lounges are also available. There are a few more restaurants at Crystals, part of the CityCenter complex, including Cucina by Wolfgang Puck. Evening entertainment ranges from the Cirque du Soleil show Zarkana and late night shopping at The Shops at Crystals to chancing your luck at the casino. The Strip itself is approximately a five to ten minute walk through the CityCenter. It’s almost as if the term state-of-the-art was coined for the accommodation at the ARIA. The rooms and suites here are packed with technology from keyless locks to one touch technology allowing you to control lighting, air-conditioning, curtains and music, all by the side of your bed. You’ll hardly have to lift a finger! The Deluxe King and Deluxe King Cityview Rooms are spacious with floor-to-ceiling windows, the latter featuring fantastic views of the Strip. For a wide range of extra benefits such as access to the exclusive Sky Suites Lounge and Sky Pool and a range of complimentary refreshments throughout the day choose a One Bedroom Penthouse Sky Shuite. Oh, and the views are pretty special too!