A popular choice with the young and trendy, this hotel sits right at the heart of the city’s shopping district.

The Hotel G first opened its doors in 1908 as the Fielding Hotel and has since been added to and renovated, most recently in 2014, to create the modern style property you see today. The public rooms and guest rooms are filled with modern art pieces – created by artists with developmental disabilities – and retro furnishings which really add to the chic vibe the hotel exudes. We love the hotel’s setting just a short walk from Union Square – you’ll really be at the heart of the action here. The area is a high end shoppers’ paradise with the likes of Chanel, Saks Fifth Avenue and Louis Vuitton a stone’s throw away. If you haven’t had your fill of exercise hiking up and down the San Francisco hills there is a small fitness centre on site.

There’s plenty of dining options right out the door of the Hotel G – from diners and pizza places to Michelin-starred venues and sushi restaurants. Within the hotel itself there’s the Klyde Café & Wine Bar which offers traditional American bistro dishes and the Three 9 Brasserie which is open for breakfast, lunch and dinner. If you’re looking forward to a good night out in Downtown San Francisco the cocktail and oyster bar Benjamin Cooper is a great place to start or end the night.

As you might expect the rooms here reflect the contemporary design throughout the hotel. With just 153 rooms this is the smallest of our featured San Francisco hotels and if you are looking for simple yet comfortable accommodation in which to rest after days of sightseeing as well as state of the art amenities then this is a great choice. Choose from either a Good Queen or Great King Room which have a queen or kingsize bed respectively.

Just one block from Union Square and its many shops

• Guests will be asked to provide a credit card with the front desk before signing privileges will be permitted • Minimum check-in age is 21 years for lead guest.

Be the first to know when we can book again to this destination.

Have an existing booking call us 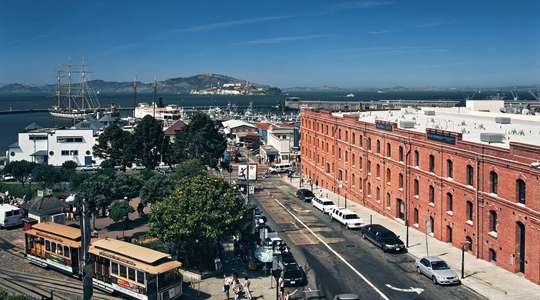 If you are looking for a stylish hotel, located close to many of the city’s attractions – including the piers from which the bay and Alcatraz cruises leave and the Hyde Street cable car – then the Argonaut is the idea choice. Located in the Haslett Warehouse built in 1907, this boutique hotel, with its exposed brick interiors has historic charm alongside modern amenities. Early risers can make the most of the popular Fisherman’s Wharf area before the crowds arrive or of course you can explore the bay coast by bike without having to tackle the city’s famous hills. The hotel’s own restaurant, the Blue Mermaid Chowder House & Bar, offers classic San Francisco dishes such as Dungeness crab and chowders as well as a range of other seafood and meat dishes. Of course there are plenty of restaurants, stalls and other eateries nearby – perfect for a leisurely breakfast, lunch or dinner. Each of the rooms have exposed brick décor and a nautical styling. Each room has a coffee maker and you can enjoy free Starbucks Coffee. There are complimentary yoga accessories in the rooms as well as a yoga channel on the flat-screen television – perfect for a relaxed start to the day. You can also enjoy in-room spa services. King and One Queen Bed Rooms have interior views while King and Two Queen Beds Deluxe Rooms have city views. For a view of the water we highly recommend upgrading to a Bayview Room or Suite. 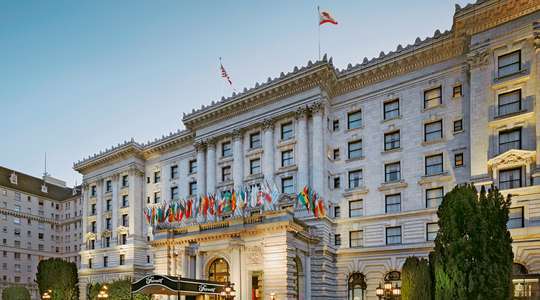 From the moment you reach the beautiful Fairmont San Francisco you will be struck by the striking exterior and classically-styled public areas. The elegance and old world charm that exudes the property belies the modern facilities that are on offer here. These include a choice of restaurants and bars – one of which serves one of the best Mai Tais in the city – as well as a fitness centre and spa – one of the few hotel spas in the city. Dining is a true pleasure here and there is a variety of options to choose from including the grand Laurel Court Restaurant. It is here breakfast is offered each morning as well as the famous Afternoon Tea at the Fairmont which takes every weekend. For dinner local and seasonal dishes, created with produce sourced from local farms and flavoured with herbs grown in the hotel’s own Honeybees & Herb Garden, are served; reservations are highly recommended. For Pacific Rim cuisine and a fun tropical atmosphere – think tikis and drinks served in coconuts and pineapples – try the the Tonga Room & Hurricane Bar which is open for dinner from Wednesday to Sunday. The classical style continues into the rooms and suites which are located in the historic main building or the newer Tower building. Each room has modern amenities such as flat-screen televisions and Keurig coffee makers. Fairmont Rooms and Fairmont Exterior King Rooms are located in the historic building with the latter featuring neighbourhood views; while Signature Rooms are set in the Tower and have fantastic views over to the beautiful San Francisco Bay. 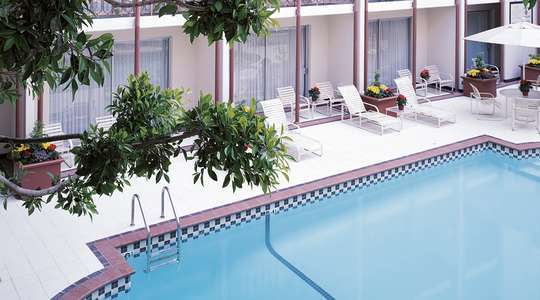 This charming Union Square hotel makes a change from the big brand hotels and prides itself on its friendly atmosphere and personalised service. You will be in a perfect location here, less than a block from famous Union Square with its numerous shops and restaurants and just a few steps from a stop on the Powell-Hyde and Powell Mason cable car routes. This really is a great spot from which to explore the city and a comfortable and welcoming place to return to following a full day of sightseeing or shopping.  Alongside the dining options nearby there is an onsite restaurant, known for its great value and tasty dishes. The fare here is traditionally American with steaks, seafood and other comfort food classics on the menu. The portions are generous – just as you will come to expect in America. The grill is open for breakfast, lunch and dinner and there the happy hour runs from 3 to 6pm every Monday to Friday. There are 377 rooms here, many of which are located in the original early 20th Century part of the hotel. These Historic Section Rooms have either a kingsize bed or two double beds as well as modern amenities such as free Wi-Fi and a flat-screen television. 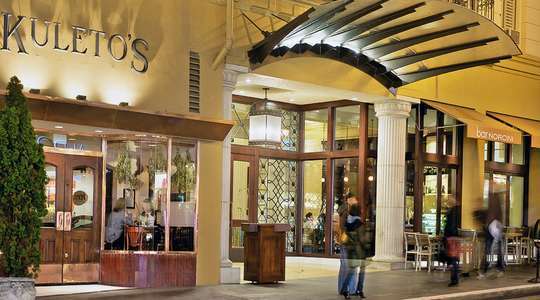 This centrally located hotel offers a mix of old world charm and modern amenities. The Villa Florence has recently gone through extensive renovations and now features beautiful décor inspired by Florentine design throughout, from the public spaces to the guest rooms. You can’t beat the location as the hotel opens on to bustling Powell Street with its cable car, and it is less than a block from the iconic Union Square – you’ll really be well placed to see the very best of the city. There’s one restaurant here which is located on the ground floor of the hotel. Open for both guests and visitors Kuleto’s is open for breakfast, lunch and dinner. The cuisine served is Italian and the dishes are created with locally sourced produce as much as possible. There is a bar here too which serves a range of organic cocktails and every weekday there is a happy hour from 5 to 7pm. A relatively small hotel by city standards, the Villa Florence features 189 bijou rooms. The style of accommodation here continues the classic Italian style with dark wood furnishings and bright feature décor. Rooms have views of busy Powell Street or are located internally and overlook another building. You can choose between rooms which feature a queen bed – prefect for couples – or two double beds.