Playing host to the annual Golden Globe Awards, this luxury hotel is part of Hollywood history.

At this Hilton managed you can follow in the footsteps of Hollywood royalty and iconic politicians. The style here is sleek and sophisticated yet not over the top and it has a long tradition of providing attentive service – and that’s not surprising with returning guests such as Barack Obama. The hotel’s Aqua Star Pool is the place to be on those hot summer days. Poolside cabanas can be rented allowing you to enjoy a slice of solitude and a cool place to lounge poolside. Following a day of shopping or exploring the famous LA sights it’s well worth indulging yourself with a treatment at the Aqua Star Spa, a tranquil haven amidst this busy metropolis.

The city of Beverly Hills, which can be reached in 15 minutes by foot or a few minutes by car is awash with gourmet restaurants, including restaurants headed up by the likes of Wolfgang Puck, Nobu Matsuhisa and Thomas Keller. The hotel does hold its own when it comes to dining though – the award winning restaurant Circa 55 is a popular spot overlooking the Aqua Pool where you can enjoy breakfast, lunch and dinner. The hotel’s Polynesian-themed bar Trader Vic’s Lounge replaces the Trader Vic’s which opened alongside the hotel in the 1950s, which was once a favourite with the hotel’s a-list guests. Today you can enjoy the nostalgic tiki culture with cocktails such as the famous Mai Tai – a Trader Vic’s original.

The rooms and suites are located within different buildings throughout the hotel – the Wilshire Tower, The Oasis and the Cabanas which are located around the pool. Rooms feature modern amenities such as Bose Wave Music systems and plasma televisions and they offer a calm and comfortable environment. The rooms overlook the pool area and over towards the city with some featuring a small furnished balcony. A range of other rooms and suites are available on request.

On Wilshire Boulevard at the intersection with Santa Monica Boulevard, in the city of Beverly Hills

• Guests will be asked to provide a credit card with the front desk before signing privileges will be permitted • Minimum check-in age is 18 years for lead guest.

• Cruise along Sunset Boulevard to Santa Monica – the western end of historic Route 66 • Head to the iconic stores of Rodeo Drive just a five minute drive away • Treat yourself to a Beverly Hilton signature spa treatment*.

Some hotels are all about the location, some pride themselves on providing exceptional service, while others seek to create a luxurious environment. The Fairmont Miramar Hotel & Bungalows, Santa Monica is one of those few properties that combines it all. What we love about this hotel is that it’s elegant but not stuffy; oh, and the views over the Pacific Highway to Santa Monica Beach and the Pacific Ocean are pretty spectacular too. You’ll be just a 10 minute walk or so to the soft sands of the beach, and a little further to the famous Santa Monica Pier. We recommend taking one of the complimentary bikes and making your way along beautiful SoCal beaches. Another unique feature of the Fairmont is the seasonal Beach Club – a private area of Santa Monica Beach reached by open-top Jeep, exclusively for the use of hotel guests which is available each Friday, Saturday and Sunday during June, July and August. As you would probably expect from a hotel of the Fairmont’s standard, providing upscale dining and drinking venues is one of the main focuses here. The FIG Restaurant is one of the region’s most sought after dining spots for breakfast, lunch and dinner, as well as weekend brunch – almost a national institution. You’ll love the wide range of dishes which are created using the freshest seasonal produce. During your stay enjoying a sunset cocktail at The Bungalow is a must, for one evening at least. It’s cool and casual with mismatched furniture, wood decking and a beach hut style design, and the cocktails and light bites are mouthwatering. Set throughout the hotel are 302 rooms and suites either in the historic Palisades Wing, the more modern Ocean Tower or unique bungalows which are located within the Miramar’s gardens. The Deluxe Rooms are in the Ocean Tower and overlook the grounds. If you are thinking of treating yourself we can’t think of a better place to upgrade to a room with a sea view; choose either a Deluxe Oceanview Room or Premier Oceanview Rooms for beach and Pacific vistas. The spacious Palisades Suite, which has garden and city views, are an ideal choice if you are travelling as a family as the separate living room has a double sofa bed.

You can’t get much closer to the iconic sights and entertainment venues of Hollywood than this uber-modern city hotel. The Loews Hollywood Hotel has an enviable position in the Hollywood & Highland Centre, which is home to the Dolby Theatre where the Academy Awards are held each year. If you are looking for a chic base from which to explore the city, dine and shop this spot is ideal; big name brands such as Fossil, Victoria’s Secret and Guess have stores here and there are both casual and fine dining restaurants, a night club and theatres. The hotel itself features a restaurant, the contemporary venue Prestons, open daily for breakfast and lunch. For days where you do little but laze by the fifth floor roof-top pool there’s the casual restaurant SPECK, where light snacks such as sandwiches, and drinks are served. No day’s dining needs to be the same with international chain restaurants, including Hard Rock Café and Cold Stone Creamery, and regional favourites, such as Cabo Wabo Cantina and Grill on Hollywood, available at the Hollywood & Highland Centre. The Dolby Theatre hosts big name artists and cultural events, as does the iconic Hollywood Bowl, which is just a short drive away. The rooms here have been recently renovated to bring them into line with the contemporary style of the hotel. The Standard Double Rooms are a great choice, we recommend choosing either a Cityview King Room or even better, a Hollywood Sign King for a view of the region’s most famous landmark. The open-plan Studio King Suites are a more spacious option and feature a living area and views of either the Los Angeles skyline or the Hollywood Sign. 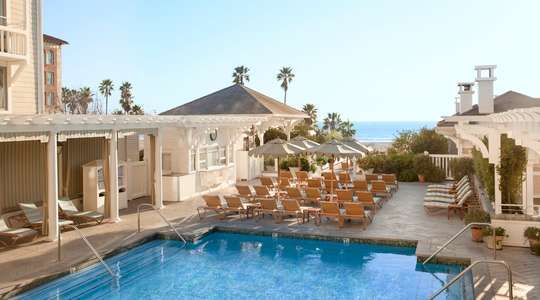