This was my second trip to the Galle Jetwing Lighthouse hotel. As always, the venue is mesmeric! However, compared with our last visit a couple of months ago, this time there were a few not so fabulous experiences that we had: -The air conditioning was woefully inefficient in the rooms. The fact that the fan too completed a perambulation in genteel slow motion also didn’t help with the cooling. Split units would be a much more effective option, both cost and experience wise. -There was an infernal noise outside the bedroom at 8am as housekeeping staff navigated their merry way across the corridor for a full 30 minutes. -The handmade soap, although a quaintly nice touch, produced no lather and was hard as a pumice stone. ON THE GOOD SIDE! -Used their spa facilities for the first time. Well trained, professional Indonesian masseuses wrought their magic on our aching legs and feet. -The alacarte menu covered a gamut of cuisines and the food was delicious. -The promontory seating area overlooking the ocean on the western side, as always, was the piece de resistance. The sunset there over a cup of tea or a glass of wine is phenomenal food for the soul. Would probably make a poet out of the most jaded amongst us!

One of the Bst place in DownSouth

i stayed with my family there on last week and we had a relaxing time . very attentive and caring staff, always wanted to serve the best to the guest, Rooms are clean and spacious, nice outdoor are and my kind enjoy the it well,

Had a delightful stay at Lighthouse. This was my first time at the hotel and it totally lived up to my high expectations. Rooms were excellent. The best was the restaurant service and delicious food. Travelled with 3 kids and they were accommodated well. Hope to return soon. Thank you to all the staff of Jetwing LightHouse to make our stay a memorable one!

A luxurious stay next to the crashing waves

This hotel is old but very well maintained with a lot of personality and it's close to the fort. We stayed in the main wing with an excellent view of the waves crashing against the rocks and a view of the coconut trees against the sun. There are two pools a nice beach and the rooms are large and very nicely designed the balcony is great for a drink or reading a book. Wifi speed is good enough to stream an HD movie but for some reason scruples to play youtube in HD. The food is excellent! The staff made us feel welcome. Many thanks to misters Nishantha, Milan, Baratha and kasun. And a special thankyou to Mr Alwis who was an excellent host from the very first day. Overall excellent location close to the fort. Great rooms great view great staff would recommend in a heartbeat 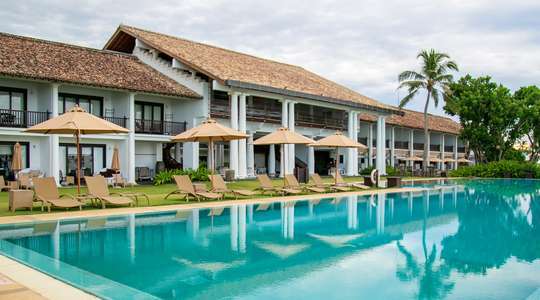 Close to the fortified city of Galle, this beachfront hotel echoes the city’s charming architecture with immense gates, white-washed walls and an extensive courtyard. This is the focal point of the resort, with many people enjoying the cooler air and pretty gardens located within. Here you’ll also find the spa, known for its range of Ayurvedic treatments and water therapies. There are two restaurants to choose from – White, the all-day venue specialising in innovative Sri Lankan cuisine and international dishes, and Salty Snapper which serves seafood al fresco in the resort’s garden. For a special occasion, Duo is a romantic fine dining venue which has walls that are lined with floor-to-ceiling wine racks. There are also two lounges, one serving a variety of local teas and the other serving cocktails, including some that are infused with tea. Rooms are spacious and modern and some even come with a private plunge pool; as a Kuoni guest, you’ll get a guaranteed upgrade to the next room type if you travel from April to July and or September to October. Fortress Rooms have an enclosed terrace or balcony with a view over a walled area. We highly recommend upgrading to an Ocean Room or a Beach Room for great views. Beach Rooms are on the ground floor with direct access to the pool and beach area. The Beach Splash Rooms are located on the ground floor and feature an indoor plunge pool which overlooks the resort’s gardens and beach. 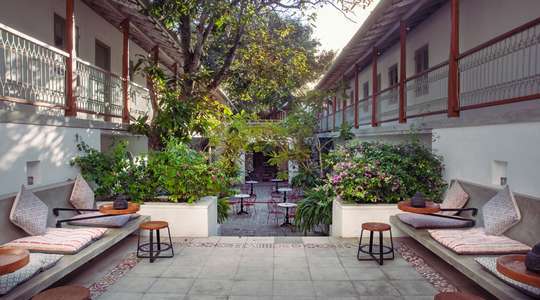 There are hotels with a rich history. And then there is Fort Bazaar – part of history. This enchanting bolthole sits pretty on a narrow cobbled street, among the imposing ramparts and colonial-era buildings of the UNESCO-listed Galle Fort. It took 11 years to restore the former merchant’s mansion – and it paid off. A huddle of whitewashed buildings is arranged around an open-air central courtyard, scented by a riot of frangipani flowers and illuminated by glowing Moorish lamps after dark – a scattering of cushion-topped chairs are heavenly chill-out spots. While the architecture and interiors nod to its colonial past, a contemporary twist updates its 17th-Century heritage – think hand-woven Sri Lankan fabrics and lots of pale wood. Just 18 rooms create an intimate vibe; the 15 Bazaar and Banyan Rooms are calming cocoons with pared-back, Scandi-style interiors; the latter with the added perk of a private balcony or terrace. For a slice of luxury, plump for one of the three Upper Suites – sleek dens with oodles of space and fort views, along with original features; all wood beams and pitched ceilings. An inviting restaurant sees locals and guests mingling over plates of fish tagine or black pork curry, against the comforting hum of the streets beyond the wide-open doors.