With its chic design, scented gardens and atmospheric spa, this luxe hotel is a grown-up retreat in the heart of the city.

Part listed monument, part art installation, Hospes Palacio del Bailío is a cultural attraction in its own right in a place not short on them. This graceful manor house, built between the 16th and 18th centuries on the site of a Roman villa, has been updated with real flair, the sort that teams ancient stonework, futuristic designer light shades and reimagined al-Andalus-style horseshoe arches and pulls it off. Once through the discreet entrance - an elegant carriage gateway into a paved courtyard - it won’t be long before the serene atmosphere created by everything from the soft light of the marble-floored corridors to the rustle of greenery from the garden has you under its spell.

The thought that has gone into every element means that picking a highlight will be down to personal taste. For some, it will be gazing at Roman ruins below the restaurant’s glass floor while sipping the first coffee of the day; for others, it will be the creative fusion food served there, sometimes even at breakfast. There’ll be a wealth of votes for the glorious garden, filled with citrus and avocado trees, sturdy palms and the scent of jasmine, and as many for the pretty outdoor swimming pool in a sheltered corner of it. And it would be hard to ignore the appeal of the in-house Bodyna Spa, with its subterranean thermal suite of Roman baths and a menu of rituals and treatments designed to leave you floating on air.

In the 51 rooms and suites, all unique, there’s the same seamless blend of original features and contemporary design touches that’s such a feature of the public areas. There might be a vaulted or painted ceiling, a horseshoe arch or an ornately carved wooden door, perhaps. There will most definitely be clean-lined modern furniture, velvet headboards with a Moorish flavour, and a neutral palette that goes from off-white to earthy bronze, including in the sleek, marble-lined and up-to-the-minute bathrooms. And that’s the case whether you’re in a lead-in Dreamer’s, a slightly larger Deluxe and Deluxe Garden View room or a roomier-still Junior Suite, some of which are impressively spacious.

In the centre of Córdoba, a short walk from the Mezquita and other historic sites

Half Board • Breakfast and dinner at Arbequina. 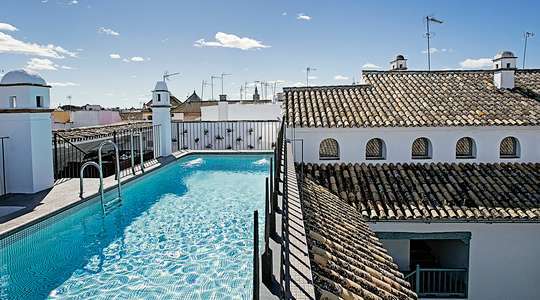 You’re embraced by a sense of timeless elegance the moment you pull up in Hospes Las Casas del Rey de Baeza’s front courtyard, which is framed by orange trees and whitewashed 18th-century buildings with tall blue-shuttered windows. Inside, it’s even more atmospheric; there are shady inner patios surrounded by three storeys of galleried walkways and blue-painted balustrades, plus a cleverly uncluttered interior design that respects the building’s history but also feels quietly contemporary. The hotel’s crowning glory, literally, is its rooftop terrace with superb views over the old town and - an unexpected treasure - a swimming pool. This means you can explore the delights on the doorstep all morning before tottering back for a reviving dip, something light-ish to eat from the pool-bar menu and a siesta on the inviting loungers before heading out into Seville life again. And later on, you can return here for a muscle-soothing massage at the bijou Bodyna Spa, followed by cocktails and tapas as the light begins to fade, before descending to ground level to savour the fabulous Andalucian-with-a-twist cuisine at the rustic-chic à la carte restaurant. The 41 rooms and suites, which are grouped around the inner courtyards, are just as inviting and individual. The simple old-meets-new design - whitewashed walls, tiled floors with esparto-grass rugs, and splashes of warm blue from the painted wooden shutters and soft furnishings - creates an impression of space and lightness, even in the smallest rooms, the aptly named Dreamer’s. If you want more actual space, opt for either a Superior Room or a Deluxe; the latter has a separate sitting area where you can have a third bed set up for a child. Largest of all is the Junior Suite, which comes with a separate sitting room and a dressing room, so there’s no issue about where to put an additional single bed if you need it. 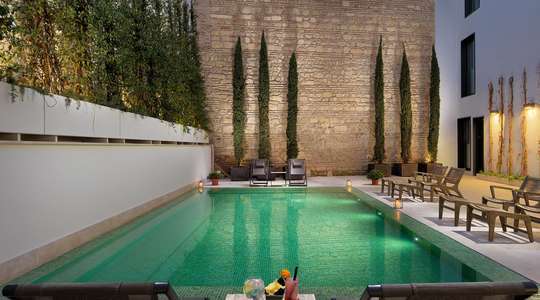 H10 Palacio Colomera is housed in the old Casa Colomera, which was built in 1928 to serve as a palace for the counts of Cordoba. It’s been sensitively restored so that the charm and atmosphere of the original building remains, and large leafy plants dotted around the main areas create a sense of calm. The hotel has a top location in central Plaza de las Tendillas where, instead of chiming, the iconic clock tower strikes with the sound of a flamenco guitar. There are plenty of restaurants, cafés and bars within walking distance and local attractions include the Mosque-Cathedral of Cordoba, which is known for its candy-cane-esque brick-and-stone-striped arches. Rooms at the hotel are contemporary, cosy and comfortable. For a bit more space, book a Junior Suite Standard, which has a living area with sofa bed, as well as views of the Plaza de las Tendillas. Facilities centre around the small courtyard patio, where there’s a plunge pool (low depth) and a relaxation area with sun loungers. There’s also a handy breakfast room in the hotel’s elegant atrium, so you can fill up with a hearty buffet to set you up for the morning. For the rest of the day, snacks and drinks are served at El Rincón de las Tendillas Café, which has views over the Plaza de las Tendillas, and up on the Rooftop Br El Balcón de Cordoba – the perfect spot for cocktails overlooking the city skyline. 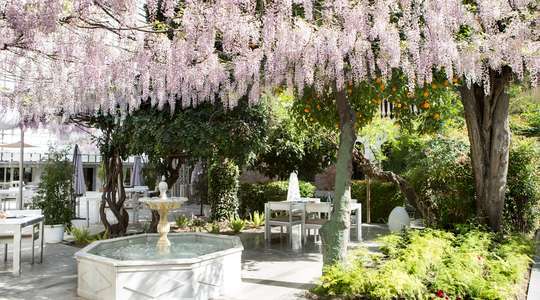 The boutique Hospes Palacio de los Patos has a central location just outside Granada’s Old Town, within easy walking distance of attractions including Granada Cathedral, Royal Chapel and City Hall. The hotel has an attractive pale yellow façade and is made up of two buildings: the restored 19th-Century Los Patos Palace – which has lots of original décor details such as a grand marble staircase, classical figures, mosaic floors and ornate cornicing, and has been designated an Asset of Cultural Interest – and the new light, white Alabastro building. Rooms are divided between the old and new wings, so you can choose the décor you prefer. Dreamer Alabaster Building rooms are light and modern, while Junior Suite Palace rooms are the most traditional and full of character, with high ceilings and statement beams. Facilities are all about the sleek Bodyna Spa: a relaxing area with a small indoor pool, sauna and hot tub. The therapists here specialise in Balinese massages. And for food, there’s Los Patos Restaurant, where the menu focuses on fresh seasonal ingredients and local traditions – signature dishes include different varieties of paella and ecologic caviar from Riofrío. The outdoor space is beautiful, too – grab a table on the sun-drenched garden terrace and sip cocktails by the fountains. You might even catch one of the regular poetry nights. 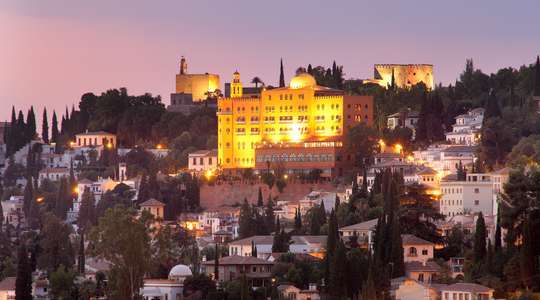 Hotel Alhambra Palace is an impressive building with a stunning setting. It perches grandly on a hillside and has panoramic views over the city of Granada, the Alhambra forest and Sierra Nevada mountains. It’s just a five-minute walk to the Alhambra Palace (which is very popular, so make sure you pre-book) and you can spend your days leisurely exploring the city’s street stalls, teahouses, bohemian cafés and historical attractions. G&Ts up on the hotel’s Panoramic Terrace at sunset is a must, when the city gets bathed in a dusky violet light. For food, the Panoramic Restaurant serves dishes rooted in Andalusian traditions and focuses on fresh local produce, with stand-out options including steak tartare, Iberian cured ham and Andalusian gazpacho. Rooms are comfortable with a Moorish style and views of the city, forest or mountains. The hotel has a fascinating history, too. It was inspired by nearby Alhambra Palace and dates back to 1910. Previous guests read like a ‘who’s who’ of royalty, politicians and Hollywood A-listers, and in the 1930s it was used as an army hospital during the Spanish Civil War. Décor details such as elaborate stuccowork and Moorish tiling add to the historic charm. 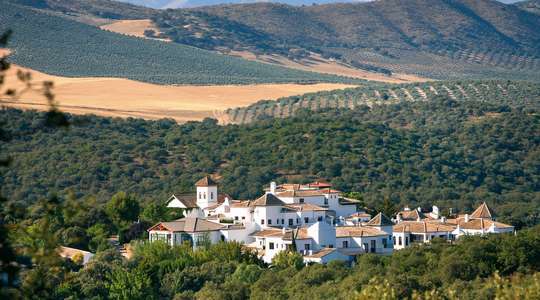 La Bobadilla started out as a gourmet restaurant – its food and location were so popular that it grew into one of southern Spain’s best-loved hotels. The setting is enchanting; on a peaceful 350-hectare estate of fragrant gardens and lush lawns, surrounded by olive groves and oak trees. The hotel is around midway between Malaga and Granada, which makes it easy to include in a wider itinerary, but it’s also a fantastic destination in its own right, far away from the city bustle and with lots of green space to explore on hikes or bike rides. This member of the Leading Hotels of the World has been designed in the charming style of a white-washed Andalusian village. The large outdoor pool area is a highlight and has plenty of poolside loungers where you can curl up with a good book or podcast. Inside, there’s a rustic-luxe feel, with terracotta floors, high archways and beautiful attention to detail. Light and airy guest rooms are dotted around the estate. Many come with a balcony, terrace or garden – perfect for private al fresco breakfasts. Romantic couples will love the Junior Suite with Panoramic Terrace with its spacious terrace, while families are well catered for with a range of interconnecting rooms and two-bedroom suites. Dining here is special. There’s a focus on local produce and the exceptional olive oil is the ideal base for the fine dining dishes at gourmet La Finca restaurant, which is one of the best restaurants in and around Granada. Choose one of the tasting menus to take a culinary tour of Andalusia. El Cortijo also serves up regional cuisine – grab a table on the terrace for breathtaking views of olive groves and the Loja mountains. La Bobadilla has impressive eco credentials too. It takes influence from the local environment and uses olive stones as an energy source for heating and hot water, which has zero pollution. 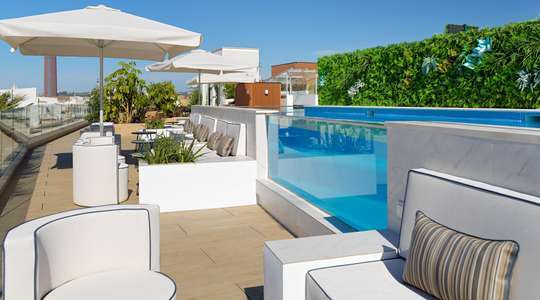 H10 Casa de la Plata has a top location on a pedestrianised street in the centre of historic Seville. You’re just steps from the Plaza del Salvador and surrounded by bars and shops, from markets and independent boutiques to world-famous chains. There are plenty of attractions within walking distance, too, including the cathedral and Alcazar. The hotel has an intimate feel. Its design is inspired by a typical Sevillan house, with traditional features (the custom-made ceramic tiles are beautiful) alongside modern facilities and quirky art. Fill yourself up for a morning’s exploring with a buffet-style breakfast at Magallanes Restaurant – the restaurant has access to the lovely Andalucian courtyard, complete with trickling fountains, so bag a table out in the open air for a relaxing start to the day. If you’re feeling peckish later in the afternoon, the lobby bar serves snacks and tapas to accompany cocktails. Rooms are elegant and bright, with pops of vibrant ochre adding warmth and a sense of place. There are options to suit whoever you’re travelling with: sole-use rooms if you’re sightseeing solo, double rooms for couples, triple rooms for friends, and spacious family rooms.