The food was excellent and the staff friendly and responsive. We had the red curry duck and the sweet and sour chicken for main course and the mango sticky rice for dessert. The best Thai food in Muscat

Ashwarya was friendly and so cute . She recommended to us the dishes and they were extremely delicious 🤤. I loved the salad was mixed with mango, soya beans and avocado. I tried the prawns also as a starter.The main course- chicken briyani - was yummi.

Excellent service from Dhinesh and Bada. Delicious food , we enjoyed it. Bokhara restaurant has the finest indian food in Muscat. I would recommend it for all family and friends. The biryani chicken was perfect all together and the butter chicken spices was excellent too

We have stayed in the Kempinski hotel a couple of times and I can say that every time we leave we miss it and want to come back! The location is amazing and so are the staff. I would definitely recommend this hotel for families. We have tried the Dippy's Summer Camp (kids club) for our 2 kids and they loved it. We would personally like to thank these staff members in the Dippy's summer camp by name as they have been amazing, they are: Minoosh, Khadija, Aseel, and Radhiya Thank you very much. And we will surely be coming back again!

Kempinski Muscat, was a nice stay, clean relaxing rooms with all needed amenities. Very friendly staff. Specially Miss Aline on front desk reception , she had a professional approach, been very helpful, assisting, friendly and caring. 5 Stars for such client approach and thumbs up. 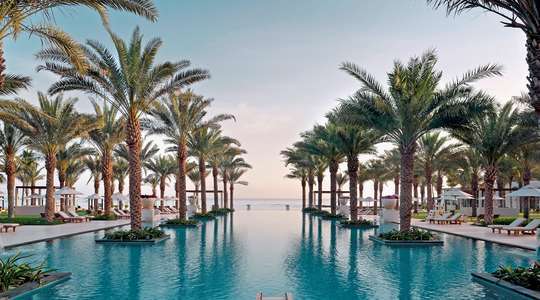 A cathedral-like entrance lobby and majestic Arabian architecture set the tone of Omani luxury here. This continues throughout the extensive gardens, which are perfectly positioned between the Al Hajar Mountains and a half-mile long private beach. If you’re looking for complete relaxation, as well as those essential modern facilities and a few active pursuits, Al Bustan Palace is the perfect choice. Restaurant choices range from the chic yet casual Al Khiran Kitchen Restaurant to the sophisticated Beach Pavilion Restaurant & Bar, where seafood lovers can enjoy fresh dishes and Gulf views. The Beach Pavilion is an Al Bustan Palace experience not to be missed – advance booking is recommended as it’s one of the region’s premier dining spots. The Six Senses Spa is beautifully constructed with traditional local design in mind, and offers a host of indulgent treatments, a Ladies Club and a range of facilities including a steamroom and saunas. Rooms and suites are spacious and thoughtfully designed, combining a sense of space and modern comforts. Deluxe Rooms each have a private balcony with mountain, pool or sea views. For direct access to one of the hotel’s beautiful lagoon pools from your private terrace, we recommend a Deluxe Lagoon Access Room. 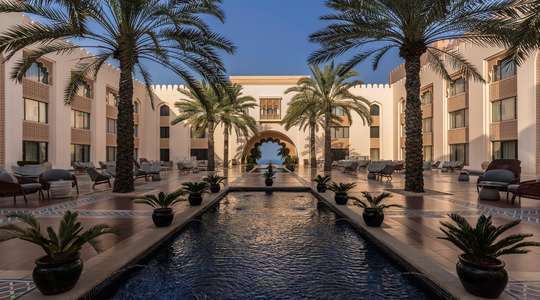 Formerly part of Shangri-La Barr Al Jissah Resort & Spa, Al Husn is now a separate property – with the perk of continued access to the resort’s extensive facilities right on its doorstep. The perfect retreat for a romantic Arabian escape, this hotel is ideal for spending lazy days by the tranquil infinity pool or on the private beach with its commanding views – accessible only to guests staying at Al Husn. Choose between enticing flavours of Moroccan, Lebanese and Omani cuisine at Shahrazad or international dishes at the luxurious Sultanah – both of which are located on site at Al Husn. Or make the most of the resort and choose from several restaurants and bars at Al Waha and Al Bandar. A new rooftop afternoon tea experience will add a memorable way to enjoy the beach views and a new spa brings luxurious treatments using products from French brand L’Occitane. Each of the rooms and suites have been thoughtfully decorated in a traditional Arabian style and feature paintings by local Omani artists. Deluxe Rooms have a furnished terrace or balcony overlooking the courtyard and pool area. If you enjoy waking up to a view of the sea, choose a Deluxe Sea View Room. 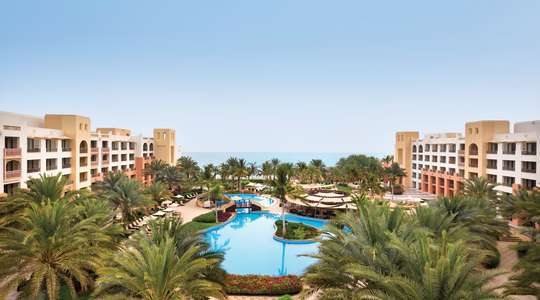 Set on the edge of the Shangri-La Barr Al Jissah Resort & Spa, Al Waha has been created with families in mind. The hotel surrounds an oasis-like swimming pool which features a children’s pool and splash pad, shaded by towering palms. There are a selection of amenities and activities, including an indulgent spa, a dive centre and a range of restaurants and bars. Al Waha’s main restaurant, Samba, serves a variety of international dishes while the Surf Café is an ideal spot for a casual family lunch or dinner. Classically designed rooms and suites include Superior Rooms. Setting Al Waha apart from the two other hotels are the Family Rooms, which consist of two interconnecting bedrooms. These rooms also feature a DVD player and a PlayStation. 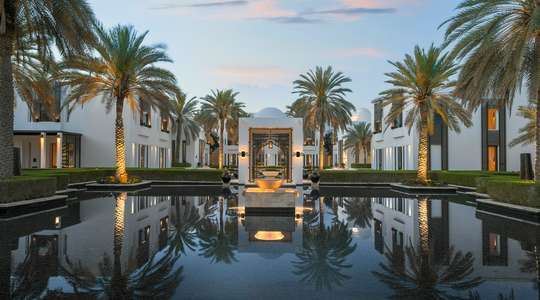 It’s hard to believe that such a zen-like retreat lies just a short distance from the capital. The mostly minimalist style is accented by traditional Omani and Asian twists. Feel your stresses melt away as you wander through the hotel’s beautiful gardens, scattered with tranquil ponds and swaying palms. This hotel is Oman’s only member of the Leading Hotels of the World, and it shows in its elegant facilities which include the longest pool in Arabia at 103 metres, one of Muscat’s largest spas and a 370-metre private beach. When it comes to choosing where to eat, it all depends on your mood and tastes. Dine on seafood at the The Beach Restaurant, or go for a casual meal at The Long Pool Cabana. At the main eatery, The Restaurant, watch skilful chefs in the four open kitchens as they whip up western, Asian, Middle Eastern and Indian dishes. The modern style continues into the rooms and suites which all include a complimentary minibar replenished daily, a Nespresso coffee machine and en suites with ultra-luxe Acqua di Parma toiletries. The Serai Superior Rooms are in the Serai Wing; Deluxe Rooms are found in the Chedi Wing and are more spacious. We recommend upgrading to a room with access to the Club Lounge, like a Deluxe Club Room, which comes with afternoon tea, snacks, evening cocktails and canapés. And in a Chedi Club Suite, you’ll get panoramic sea or garden views from a private terrace or balcony as well as a separate living room and access to the Club Lounge. 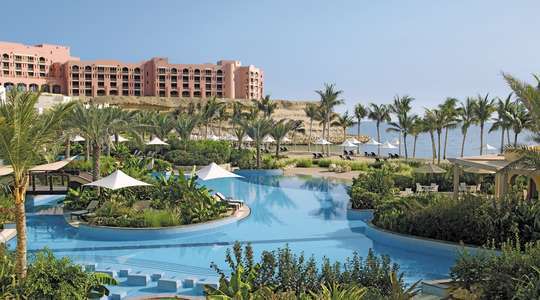 Sitting at the heart of Shangri-La Barr Al Jissah Resort & Spa, Al Bandar is the ideal choice for those guests who wish to be in the midst of all the action and plan to make good use of the resort’s extensive facilities. Take a culinary journey around the world at the resort’s numerous restaurants, bars and lounges – eight of which are located at Al Bandar. Italian specialities are served alongside fine wines at Capri Court, while Spanish dishes can be enjoyed at Tapas & Sablah. Al Bandar’s rooms and suites feature a modern, Arabian-inspired style with comfortable furnishings and artworks crafted locally. If a little more space is required, upgrade to a Premier Room from a Deluxe Room.