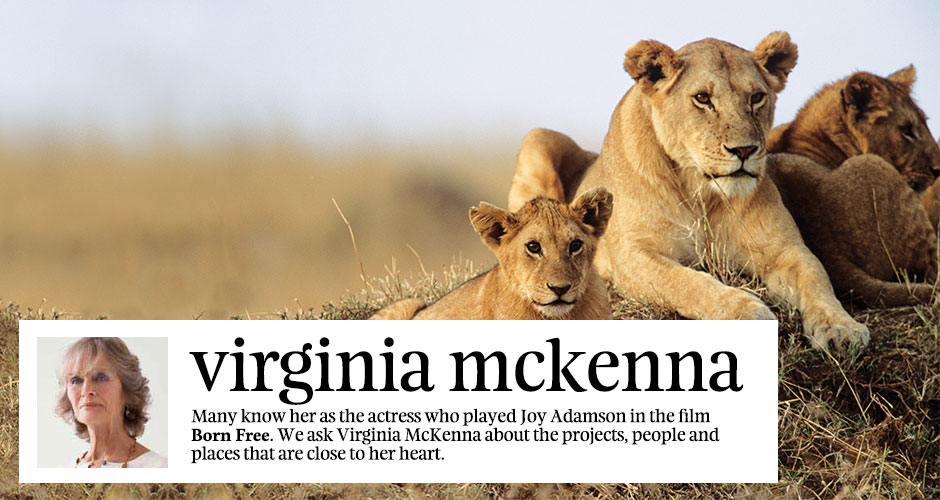 Why did you start the Born Free Foundation?

It was the death of an elephant at London Zoo called Pole Pole that really started our work. In 1968, I worked with my husband Bill Travers on a film called An Elephant Called Slowly. We went to Kenya looking for a young elephant to be in the film.

We got in contact with a lady called Daphne Sheldrick and her late husband, David, who was the senior game warden of Tsavo National Park. Even back then, Daphne was rescuing elephants and you’ll get to visit her orphanage during the Born Free Safari.

She didn’t have a young one at the time so we were told about this tiny two-year-old elephant who had been taken from the wild, snatched from her family, and put in a trapper’s yard, ready to send to London Zoo as a gift from Kenya’s government at the time.

We went to see her but didn’t think she could be used, as she was so frightened. It was awful to watch the poor little thing. David Sheldrick calmed her within a few days and she worked with us for six weeks. After filming, we asked if we could buy her and give her to the Sheldricks so she could be with the little group of elephants with whom she now got on so well. They said yes – but they’d have to capture another one. It was heart-breaking. We just couldn’t agree to that, so she was sent to London Zoo.

About 12 years after, we heard Pole Pole was going to be put down. They said she was so difficult and no-one could get on with her – that she was a problem. I found a lovely wildlife park in South Africa that would have her but the zoo authorities decided to send her to Whipsnade. It never happened. She collapsed in her travelling crate because she had been in it for so long and, a week later, they put her down.

That was the catalyst. Bill and I always talked about these things but we’d never gone public and we knew we must. That was the moment we decided to start our very tiny charity called Zoo Check, with Joanna Lumley as our first patron. We’d started it because of wild animals in captivity but soon my son Will developed our work to include conservation problems in the wild and we changed the name to the Born Free Foundation.

What Born Free projects are taking place in Kenya at the moment?

We’ve got an ongoing de-snaring project. There are hundreds of ghastly snares – they even put them in trees to catch giraffes. The bush meat is often sold to a middle man and sometimes reaches our restaurants in this country. It’s a terrible trade.

We also work with local communities and raise money to build lion-proof bomas, which cost about £900 each. The Maasai build bomas to protect their cattle at night but many aren’t lion-proof. Lions get in, drag out a cow or goat and often there is retaliation, with the Maasai killing a lion. None of us want this to happen. 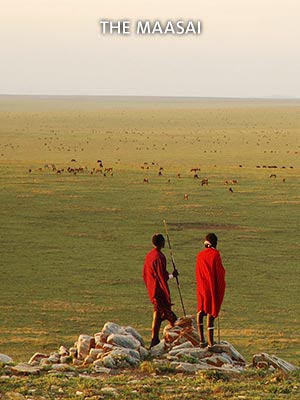 We’re building these amazing bomas – huge enclosures that house 400 cattle and 200 goats – and in between the traditional thorn-bush fences we’re putting a layer of triple-mesh metal. It’s absolutely lion-proof and the Maasai are delighted. We’ve created 15 now in Amboseli and our aim is to build 50. I’m very excited that Kuoni guests will get to see these bomas during the Born Free Safari.

We also work with local communities and raise money to build lion-proof bomas, which cost about £900 each. The Maasai build bomas to protect their cattle at night but many aren’t lion-proof. Lions get in, drag out a cow or goat and often there is retaliation, with the Maasai killing a lion. None of us want this to happen.

We’re building these amazing bomas – huge enclosures that house 400 cattle and 200 goats – and in between the traditional thorn-bush fences we’re putting a layer of triple-mesh metal. It’s absolutely lion-proof and the Maasai are delighted. We’ve created 15 now in Amboseli and our aim is to build 50. I’m very excited that Kuoni guests will get to see these bomas during the Born Free Safari.

Are animals released back into the wild?

None of the animals we’ve rescued have ever had any knowledge of the wild, so they haven’t been released back. They’ve had no mother to teach them to hunt and they would have a real challenge ahead of them. There may already be prides of lions in possible release areas, and it would be very challenging for ‘our lions’ to establish a territory.

Most of our rescued animals come with severe physical problems – untreated illnesses, weak bones, concave backs, liver and kidney problems – they’re not in tip top condition. This is one of the reasons why rehabilitation is impossible. They live in huge bush enclosures – happy retirement homes, I call them. They are closely monitored by the wonderful staff and the vet at our sanctuaries. Although it’s a drop in the ocean, we’ve helped a few.

Do you still get involved in Born Free animal rescues?

If there’s a rescue taking place, I do like to be part of it. This photograph shows me in Malawi watching the release of Bella a couple of years ago. She was rescued from a Romanian zoo and I accompanied her on her journey. 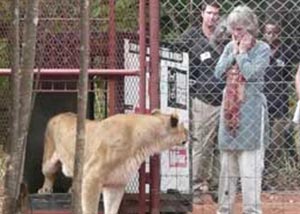 I’ve recently been part of a trip to rescue a lion called Dolo, who was found in a shed on the border of Ethiopia and Somalia with one-metre of chain wrapped around his neck. He had been there for four years. He had no mane because the chain prevented it from growing and he hardly looked like a lion. He is now in our rescue centre in Ethiopia and Dolo has a lovely female companion, so is settled. I still love going on the rescues, as it’s all about the individual animals.

I love this project. We invest in a community or school near to one of our animal projects. If you choose the Born Free Foundation Safari, which leaves in October, you’ll visit Ol Moti School in Amboseli. Actor Martin Clunes came with me in 2006 to Ol Moti and we knew it was in desperate trouble. There was no water, the school classrooms were smashed to bits and it really was a dump. There was nowhere for pupils to stay so they would have to walk over four miles each way. We’ve now provided uniforms, brought in water, built dormitories and there are nearly 400 children attending school, whereas there were fewer than 100.

If you choose Kuoni’s Kenya Born Free Safari, you’ll visit Manyatta Primary School. Kuoni has helped us raise money over the last four years for this school and it now has a tree nursery, classrooms, a library, desk and books – it’s magical! The children are so thrilled, so grateful to be learning.

With this kind of project, communities understand that by respecting their unique wildlife and nature, they’re going to benefit. It’s a really wonderful concept and you’ll love visiting the school.

What’s your favourite place to stay?

My spiritual home is Meru National Park, where you’ll stay at Elsa’s Kopje Lodge. That’s where it all started, that’s where Elsa was released, where she brought her cubs to see the Adamsons, where she’s buried. I’ve been many times and I absolutely adore it.

What I suggest is a bush breakfast so you don’t have to rush. During the safari, you’ll drive out there in the early morning and the breakfast will be set up, so you can relax and visit the grave in your own time. The whole history is right there in that clearing. The people who run Elsa’s Kopje are just wonderful and all the staff are like friends to me now. I can’t wait to go back.

What’s been a truly Perfect Moment during your travels?

On the 25th anniversary of Born Free, we had a special safari and on the last night at Elsa’s Kopje, we had a bush dinner. They’d done a fantastic table under the stars with music – it was magical. We talked, had drinks and, just as we sat down to dinner, lions started roaring close by. Under the stars, the roars of the lions sent thrilling shivers through me. It was just sensational and I’ll never forget it. I’ve had many perfect moments but this has to be one of the most special. It seemed like a message from Elsa.

Where do you go on holiday when you’re not working?

In the old days I used to go to Sardinia as we built a house there. Next year, my holiday will be to Kenya; I’m already planning it and want to go back to Elsa’s Kopje again. I adore it there so much.

Do you have any safari tips?

You must take your course of malaria tablets; and take lots of pens and pencils for the children when you visit the school, or some deflated footballs and a pump. They adore football. You could also take skipping ropes for the girls. On long road journeys, I always take dried fruit with me and pass it round the vehicle. Sometimes you just need a bit of sugar.

"You should go with a completely open heart, open mind and open eyes."

What do you hope people will gain from our Born Free Safari?

One of the things I feel strongly about is, when you’re on this safari, don’t look for the ‘big five’. I’m opposed to a little list like this because, if you don’t see the big five, you’ll be disappointed. Your expectations should not be pre-determined. You should go with a completely open heart, open mind, open eyes – just look and see and feel things.

You may spot lions or elephants but don’t forget to look at everything else. The primates, dung beetles, tortoises and the birds in particular – they are sensational, so you must have binoculars and a bird book with you. It’s essential. Some of the best times I’ve had involve sitting by a river and just looking; or sitting in the bush in your vehicle and waiting. Don’t miss it all, be patient, watch and listen.

I possibly know more about Kenya’s wildlife than I do about English wildlife. It’s all so fascinating and it never gets less fascinating. That’s what’s wonderful. You’re always learning something new on safari.

A unique tour in conjunction with the Born Free Foundation.

Read more about our Kenya Safaris