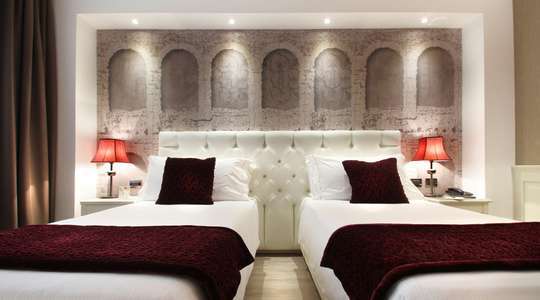 Conveniently positioned between the Porta Nuova railway station and Verona Arena, Hotel Giberti sits in a great central location that's within easy walking distance of Verona’s historic heart. Borrow one of the hotel’s free bikes and explore this timeless city – rich in history, culture and the romance of Shakespeare’s Romeo and Juliet. As a city famed for its fashion and quaint local boutiques, the hotel is close to the bustling shopping street of Via Mazzini. Or, if you'd prefer to sit and people watch in true Italian style, then there are some delightful cafés and excellent restaurants offering local specialities to enjoy in nearby Piazza Brà or Piazza delle Erbe. Inside, this central hotel marries a contemporary style with intricate touches that pay a respectful nod to the city’s rich heritage. Deluxe Rooms have a stylish and modern interior,  blending a classic refinement with all the usual mod cons you'd expect of a city hotel. In the marble-clad bathrooms, rainfall showers complement the room's sleek design, and a few even offer indulgent Jacuzzi-style baths. 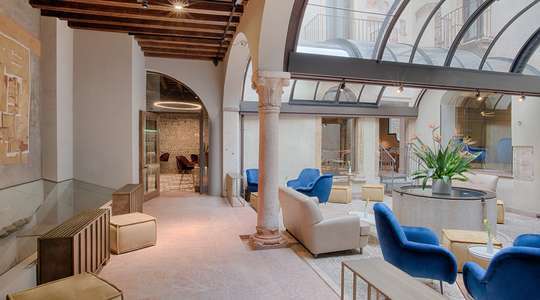 NH Collection Palazzo Verona could hardly have a more attractive setting. This newly refurbished boutique hotel occupies a 14th-century building a stone’s throw from Verona’s UNESCO-listed sites, and reminders of its past crop up throughout. There are columns and weathered stone door frames in the lobby, traces of frescoes in some of the rooms and even Roman ruins in the basement. The chic design marries these historic features with contemporary Italian furniture, such as the rusty-red velvet bar stools in the airy bar, to impressive effect. It’s very romantic in a quiet, stylish way: a far cry from the high drama of Shakespeare’s star-crossed lovers and all the more appealing for that. The varied delights of Verona are practically on the doorstep, which makes enjoying them an almost effortless experience. It’s only a short walk to Juliet’s House, Piazza delle Erbe and the Roman Arena, which is still used for open-air concerts. There’s also a host of chic boutiques, restaurants and bars to explore, and all close enough to the hotel that you can nip back for a restorative coffee in the lobby bar, a reviving rain-effect shower in your sleek bathroom or a change of outfit before the evening passeggiata. The 70 newly renovated rooms and suites are decorated in a chic contemporary style based around a soft, neutral palette; the giant padded headboards are a striking feature. Superior Rooms are a restful retreat at the end of a day of sightseeing, with a sofa to sink into and super-comfortable beds. There’s a little more space in the Premium Rooms, with a sofa that can be converted into a single bed, and yet more still in the Junior Suites, which can sleep four thanks to the double sofabed in the sitting area.