Rajasthan literally means the ‘land of kings’, so it should be no surprise that it’s also a land of palaces, many of which have been converted into some of the finest hotels in the world. Tom Waite, one of Kuoni's India experts, travels to Rajasthan to experience the life of a modern Maharaja with a stay in India’s palace hotels.

At a glance: This Indian palace is home to Jodhpur’s current royal family and it has hill-top views of blue-hued Jodhpur.

I’m sure that the Maharajas of Rajasthan were competing with each other when they built their palaces, which is likely why Maharaja Umaid Singh’s Taj Umaid Bhawan Palace on Jodhpur’s Chittar Hill is considered the last of the great palaces of India. 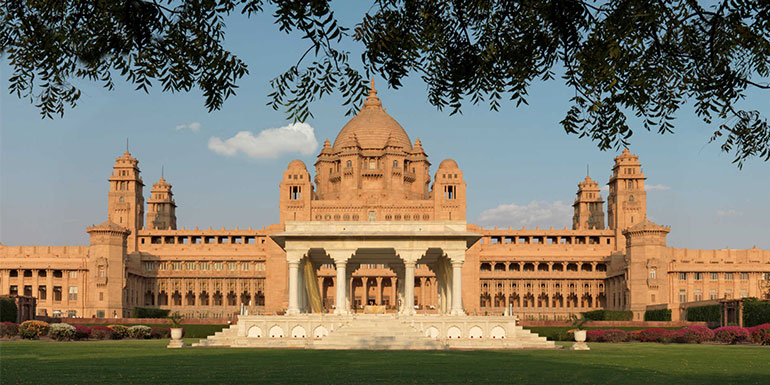 No one could top this masterpiece; no picture can quite convey the epic scale and magnificence of this building. The architectural styles meld influence from Angkor Wat to Mughal-Gothic, with splashes of Art Deco for good measure. The main dome is cathedral in stature and to stand beneath it is an ethereal experience I never expected at a hotel. 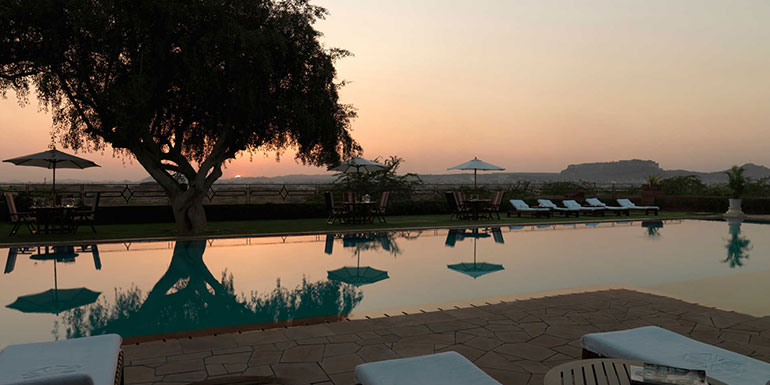 The palace’s 347 rooms create what is, in effect, the world’s grandest boutique hotel with just 70 guest rooms. The gardens are a match for the finest stately homes of Europe and the grandstand views across the Blue City of Jodhpur to the Merhrangarh Fort are magnificent. But for me the highlight of my stay was dining at the incredible ‘Pillars’ restaurant. 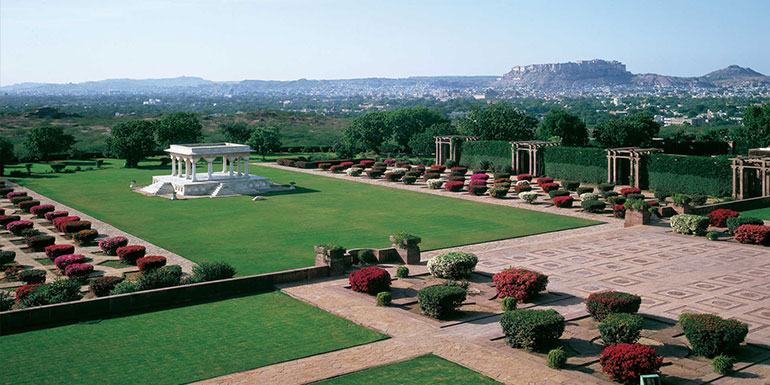 Wandering the gardens ahead of dinner, I watched from afar as the white-gloved and immaculately moustachioed servers laid out the tables in the burnt-orange glow as dusk descended. They seemed like toy soldiers beneath the giant pillars holding up the enormous dome above. As I took my seat, Jodhpur twinkled in the distance and the Indian Airforce saluted on a fly-by. Incredible.

For a perfect royal spa treatment

At a glance: This former residence of a Maharaja is set within 47 acres of stunning grounds in the heart of Jaipur and has an incredible spa with traditional Indian treatments.

A splendid low-rise building with its squat domes, soft magnolia hues and delicate terracotta balustrades, Jaipur’s Taj Rambagh Palace is perhaps the most understated of the great palaces of Rajasthan. But that’s all relative, because there’s no word short of opulent to describe this immaculate palace-come-hotel. 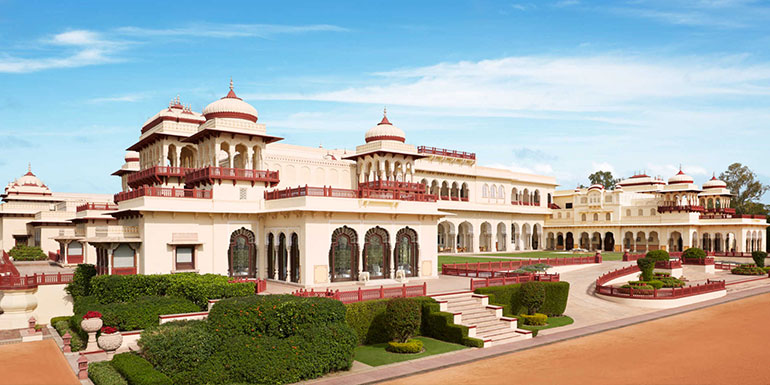 Lovingly presented guest rooms are individually decorated with sumptuous splashes of regal colours, chandeliers and gorgeous Art Deco pieces. Never before have I seen a hotel bed look worthy of display in the V&A, so much so that I was worried about disturbing it to get in later. Fortunately the turn-down transformed it into a sumptuous swaddling of inviting soft white sheets. 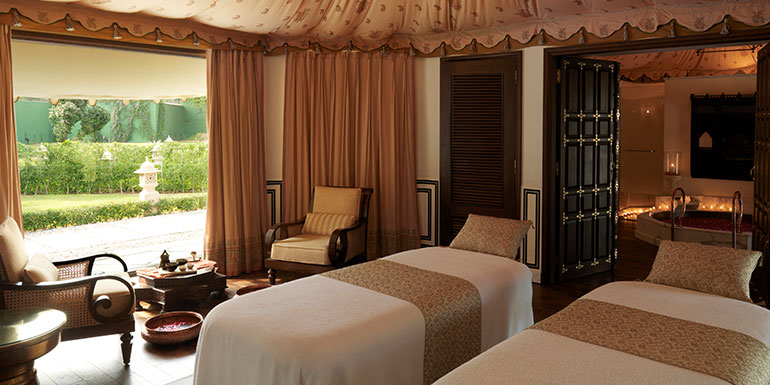 The grand pools of the Jiva Spa would have been the envy of an American industrialist of the Gilded Age and the beautiful veranda could not be more perfect for afternoon tea. The fabulously quirky ‘Steam’ restaurant and lounge bar, with its wood-fired pizzas and chilled sports bar vibes served within the setting of a vintage steam train and station, provides the perfect antidote for the heady opulence around you, should you need one. 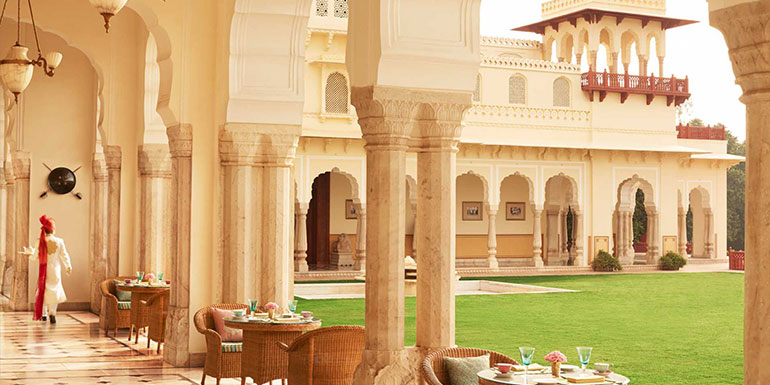 The palace on a lake

At a glance: a unique palace island on Udaipur's romantic Lake Pichola, with striking views of the Aravalli Hills.

Oft dubbed India’s most romantic hotel, Udaipur’s iconic Taj Lake Palace was made famous as the impossibly exotic lair of the eponymous femme fatale ‘Octopussy’ in James Bond’s 1983 outing. Fast-forward several decades and the palace continues to capture hearts around the world. 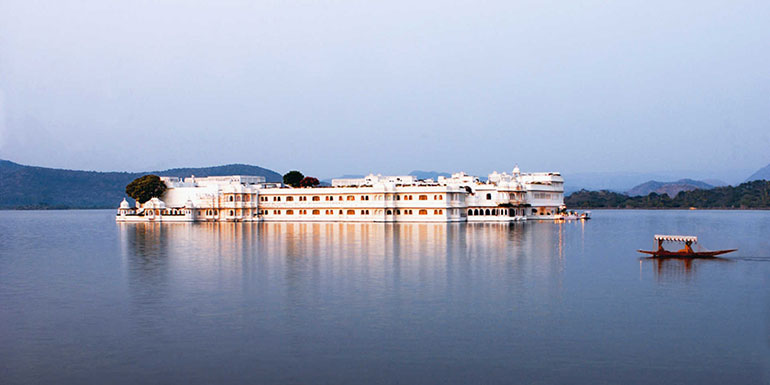 Arriving by boat is a princely experience, at first your eye is drawn, not to the diminutive Lake Palace, which sits gleaming white and low in the water like a stricken pleasure cruiser, but rather to the magnificent structure of the City Palace on the lake shore opposite. It’s almost a surprise when you pull in to dock and step, not aboard another vessel, but rather ashore onto this most exclusive of manmade islands. 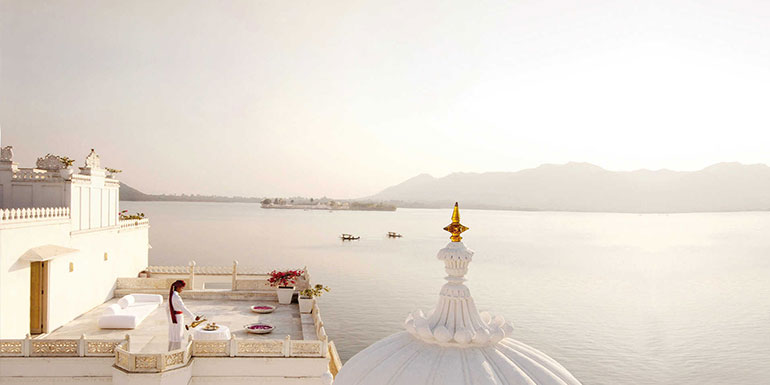 Surrounded by water, spotlessly white and airy throughout, the hotel generates its own cooling climate, with perfect courtyard gardens of exotic blooms complemented by gently gurgling fountains and the faint chirrup of small birds. 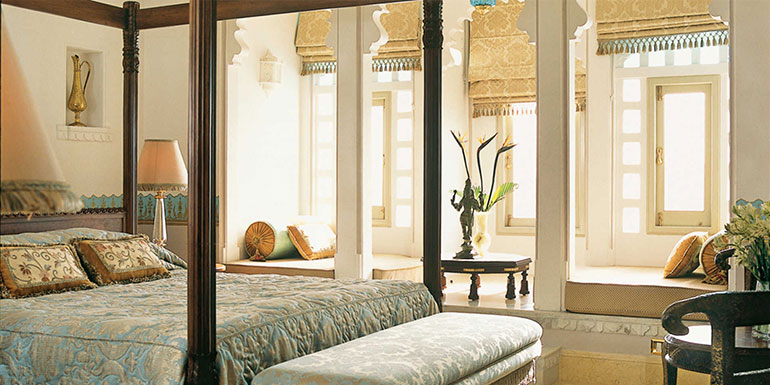 Taj has masterfully retained the seductive aura of this gorgeous abode. Guest rooms, lounges and facilities are luxurious and comfortable for the modern traveller, yet faithful to the building’s heritage as a palace built for a prince. Unique is an overused word, but there is no other hotel in the world like the Taj Lake Palace.

Mingle with the A-list

At a glance: This extravagant hotel on the waterfront has a rich history and overlooks the Gateway of India in Mumbai.

Whilst not actually a palace, nor in Rajasthan for that matter (stay with me), there are few hotels in the world that can match the sheer palatial splendidness of India’s most iconic hotel, the Taj Mahal Palace in Mumbai. I have never seen so immaculate a hotel as to rival this one; the central staircase is a masterpiece and the décor is literally perfect, everywhere, right down to the bathroom tile grout. 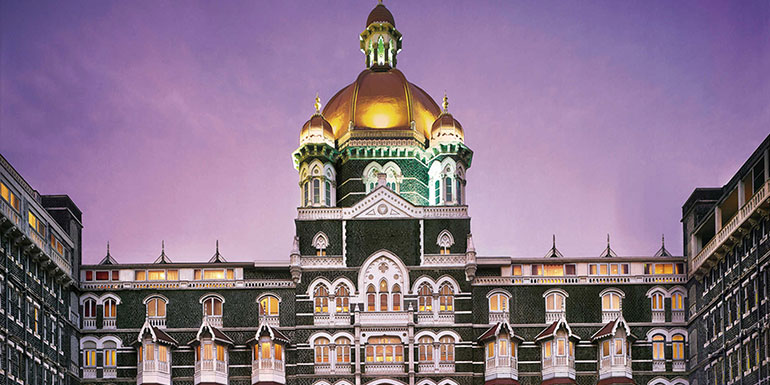 The Taj Mahal Palace & Tower is a landmark and known as an architectural masterpiece in Mumbai. It opened in 1903 and has been the stay of choice for royalty and celebrities. 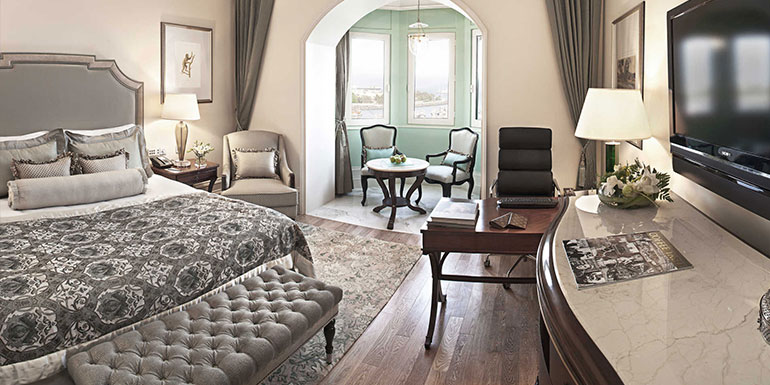 It has likely been a long journey when you arrive here, but not to worry, your personal butler can fix you a drink, run a bath, or perhaps unpack, press and polish so you’re appropriately turned-out for dinner. Later, retreat to the historic Harbour Bar for a crisp G&T and a bit of celeb spotting as you rub shoulders with Bollywood or cricketing royalty.

If you’re looking to stay in a palace in India we can help you find the perfect match. Talk to one of our one of our India travel experts, book an appointment in your local Kuoni store or order our latest India brochure.