We’ve hand-picked the best five star hotels and tours in the world.

We stayed in one of the over water bungalows and I highly suggest it. The aquatic life in the lagoon is so diverse and plentiful. I saw easily 50 different kinds of fish. I also saw sharks (baby), sting ray and eels. The over water bungalows have a see through coffee table where you can watch the coral reef animals. The hotel is within walking distance of several restaurants, as well as a small grocery store. The bar food was good and priced reasonably. The breakfast buffet was fine. The maple syrup was not maple syrup.

Amazing location, but not an amazing stay

Where to start? Our initial impression was quite good, although it was clear even from the pickup at the airport that the hotel treats different levels of guests differently. We ended up having to wait a very long time for our boat to leave the airport, whereas what appeared to be a "VIP" group left as soon as they'd gotten on their boat. The Intercontinental also has the worst looking boats, apart from the Air Tahiti ferry, which luckily wasn't an indication of the resort itself. Once we arrived at the resort, the rain started to pour down and as we arrived before 15:00 we had to wait for about an hour and a half before our villa/bungalow was ready. Compared to the nearby Le Méridien, the Intercontinental villas look 100x better from the outside and they're also much larger. Our villa was located in the bottom left arm of the two areas, which was a really nice location. Something to keep in mind is that villas this far out, ends up being in quite deep water, so depending on how good you are at swimming, you might want to request your villa accordingly. This wasn't an issue for me, but it was for my partner. The villa itself was large and clean, if a bit weird in terms of layout, as the toilet is in the wardrobe and there's no sink in the toilet. A small welcome gift consisting of some cake was on the glass table in the living room when we arrived. The glass table looks cool, but as there's very lite marine life here, don't expect to see anything swimming by under your villa. We did see a sea turtle one day, but it didn't swim under the villas. Overall, we were happy with the villa, the bed was nice and firm, although the AC was kind of annoying, as it's quite an old system and the thermostat in the bedroom only had ice cold or nothing options. The living room had a more modern thermostat which you could adjust properly. Both rooms had a large screen LCD TV, but sadly neither supported any kind of apps/streaming services and as most TV channels are in French, this is kind of a must have feature. You might wonder why you'd want to watch TV in a place like Bora Bora, well, because sometimes it rains, a lot and there's really nothing much to do those days. The internet was fairly reliable at least, although at 10Mbps it's far from fast, but it's at least both ways and there's no daily data cap. As far as food goes, the Intercontinental needs to try a lot harder. We stayed here for six nights, which was about two too long. The Reef is where you eat breakfast and as others have pointed out, it's quite repetitive. It also matters a lot on who's on duty, as some of the staff made excellent pancakes, whereas some of them made stodgy, thick things that should've gone in the bin. Some mornings were better than others, so expect a lot of varied quality of the breakfast as a whole. Oh and the hotel really needs to get a sharper bread knife, as it was almost impossible the cut the crusty bread offered. The reef is the mid-range and buffet restaurant. As such, on buffet nights, this is where you would be eating, but having had two buffets at the hotel (one was mandatory) I would say to avoid the buffets as the plague, as the food was very sub-par, especially the seafood, as it was overcooked to the point of almost being inedible. However, the dinners weren't too bad otherwise here, although, this is very much French cuisine, so expect to have to eat a starter, a mains and a dessert to get full and that will set you back quite a bit, as most mains are between $30-47 and they're quite small, with starters and desserts being around $30-40, plus drinks. It's easy to spend $100+ per person on dinner here, which isn't crazy money considering the location, but I would expect a bit more food for that kind of money. The Sands is the beach/pool restaurant and the pricing is similar here and so are the portion sizes. There isn't in fact a huge difference between the two menus, but you can burgers, sandwiches and pizza here. This is also where you'd get lunch. I tried one of their pastas and it was very sub-par with overcooked pasta and a flavourless sauce. The grounds of the hotel were well kept and the beach was pretty nice. What bugged is was the nickel-and-dime approach to everything. The mini bar prices were silly and it's the only source of water, unless you want to drink the chlorine tasting tap water. Admittedly you get two 330ml bottles of Evian a day, but why not offer filtered water near the ice machines instead and ask people to bring their own containers? Much more environmental friendly than hundereds of plastic bottles from France on a daily basis. At checkout, we'd requested a day room, which turned out to be a tiny room with uncomfortable seating, a shower and a toilet. Only saving grace was the AC. As soon as we'd checked out, we no longer felt welcome at the hotel, even though we had another five hours until we were heading to the airport. Overall this is not what we expected considering how much it costs to stay here, although it's hard to fault the location itself.

Is this the most beautiful place on earth?

In a word - YES! And neighbouring Moorea is equally beautiful. After the impressive welcome at the dock, the first thing you notice is the air smells of gardiniers, as if someone has sprayed the entire hotel gardens and grounds with the sweetest perfume. We are talking on a parallel with the Garden of Eden without the snakes or bugs! Everyone looks so happy - they clearly know how lucky they are to be there. No matter where you are, there is a photo opportunity right on front of you. Please note - time passes so quickly so please savour every moment!

Our overwater bungalow with a view of Mt. Otemanu exceeded our expectations. All restaurants and experiences at the resort were amazing. We did a jet ski excursion that we really enjoyed. Overall, we could not ask for a better experience.

We booked this hotel and opted for a pool villa so we could relax and spend some time together. There was no privacy in the rooms. Rooms overlooked each other and on thanksgiving staff had a room party at the villa next to ours so loud banging music The restaurants were overpriced and low quality food. Fish was frozen, hard and tasteless. Restaurants had untrained staff and certainly not 5 stars. We were given children’s menu and left to look at it for a while Breakfast at €80 for fairly basic buffet was very overpriced Upside is the hotel has a lovely view and nice to see the stingrays. 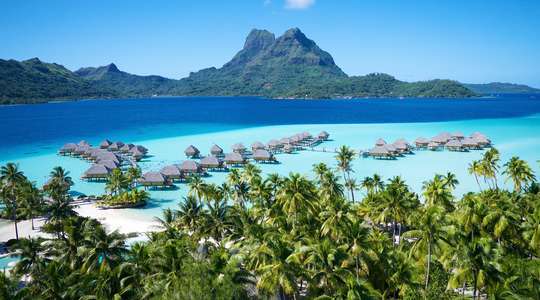 A member of The Leading Hotels of the World, this charming resort offers laid-back elegance with enchanting vistas towards the main island of Bora Bora. A snorkeller’s paradise, the focal point here is the unique coral nursery known as To’A Nui, featuring over 4000 corals and over 70 species of marine life. Head to the charming Manea Spa, where traditional Tahitian architecture meets rejuvenating treatments and lush tropical surrounds – creating the ultimate in relaxation.  Sit back and relax by the pool with a cocktail at The Miki Miki Pool Bar where, if you’re feeling peckish, you can order from a wide selection of light snacks during the day and delicious burgers in the evenings. The resort’s main restaurant, Tevairoa, sits above the main pool area and is the perfect spot to enjoy sunset dinners with an international menu. For an intimate dining experience you can book a table at Fare Ambrosia which specialises in fine Italian fare and freshly caught seafood. With only 80 bungalows, there is a real sense of peace and privacy here. Garden Pool Bungalows feature a private swimming pool, while Overwater Bungalows have direct lagoon access and sliding glass coffee tables offering full lagoon views. Lagoonview Premium Overwater Bungalows are closer to the end of the pontoon with direct lagoon access, sliding glass coffee tables and fantastic views of the lagoon and the beach. 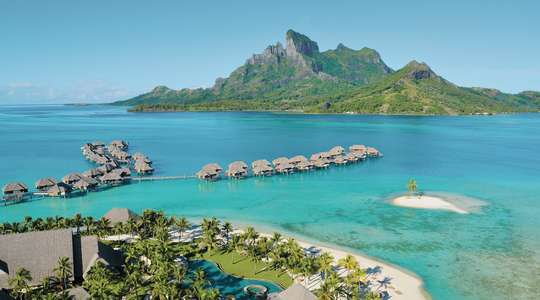 Escape to cerulean waters, glorious sands and majestic mountain vistas at the Four Seasons Resort Bora Bora and allow yourself to drift into the slow pace of island life. Snorkelling amongst the colourful reefs is a must here, where countless species of marine life surround you. With a great dive centre on site, you can head out to spot whale sharks and manta rays, to name but a few, before extending your knowledge with the help of the resident marine biologist. And, for some time away from the glistening waters and warming rays – there’s also the opportunity to indulge in a heavenly treatment at the expansive lagoon-side spa. When it comes to wining and dining, two popular choices here are Arii Moana, famed for its fresh seafood and lagoon views, and Tere Nui which offers al fresco dining on the beach. With a relaxed décor reflecting its Polynesian location, the overwater bungalow suites here are light and airy with traditional teak furnishings and beautiful high ceilings of thatched pandanus leaves. All of the bungalows have the modern conveniences you’d expect, with superior Four Seasons touches like glass-panel flooring for marine-life viewing into the lagoon below. You can choose an Overwater Bungalow with views over the beach, lagoon or mountains. For something extra special, you can splash out on an Overwater Bungalow Suite with Plunge Pool. 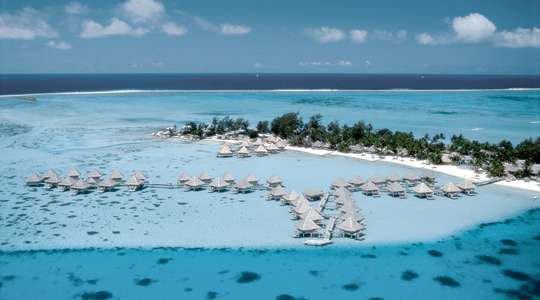 Basking in a breathtaking setting overlooking a turquoise lagoon, this resort makes a great choice for those seeking spectacular views, charming beachfront or overwater bungalow accommodation and a convenient location close to Vaitape and Matira Point – renowned as one of the world’s finest beaches. Spend lazy days here on one of the two powder-soft beaches with a cocktail in hand, or if you fancy a refreshing break from the sunshine, you can snorkel amongst the colourful reef gardens in sparkling waters. There’s plenty to do if you feel like exploring, with shark and ray feeding excursions and a selection of watersports such as kayaking available. And, if you feel the need to escape the comforts of the resort, you could rent a bicycle to explore the island. Decorated in a typical Polynesian style, the bungalows and suites at the resort are simply sublime. Whether you opt for a Beach Bungalow, situated on the beachfront and only a stone’s throw from the shimmering waters of the lagoon, or whether you splash out on an overwater Junior Suite with direct lagoon access, where sliding glass-bottom coffee tables make excellent marine life feeding areas – you’ll always experience astounding sunrises and sunsets from the comfort of your own surroundings.