Black Friday prices are a scam

Black Friday prices are a scam. Prices are exactly the same than 30 days a go last I cheeked they just want to make easy money out of you , They should be fined for false advertisement!!!!! Please share.

During COVID I decided to take the family to Fairmont and relax a bit. What a wonderful stay, everything was super clean, felt safe, relaxed. Pool were awesome! Also, Thursday nights they have a really nice live Jazz performance: a great/talented singer and guitarist. Loved the little bar they play in as well. We will go back!

My family and I stayed at Fairmont Tremblant for a short stay. We really enjoyed our experience. The team at check in was super nice, all the reception team is really polite and smiling all the time The concierge team is very effective too. We enjoyed our time at the outdoor spa which was easy to reserve upon our arrival I would return to this hotel in a heartbeat:)

My aunts , friend and I went on a mini vacation to the Fairmont Mont Tremblant over the weekend to experience the village with all the changing trees of fall. From start to finish we interacted with lovely employees and enjoyed amazing meals and drinks. We noticed the village was extremely busy throughout the day, so we tried to spend a lot of time in the hotel where they were being extra cautious and we felt very safe from the virus. Our rooms were the classic Fairmont rooms with two double beds. We had a view of the front of the hotel (not the village) but it was still absolutely beautiful to look out and see all of the trees! (Also, fun for people watching and viewing all of the fancy high end cars that were visiting the nearby track). The rooms were clean and the beds were extremely cozy, the bathrooms had so much storage and space that my friend and I were able to get ready together. The only room issue I experienced was at night time, there was a humming fan noise in the room (I am a very light sleeper, and I have this issue at home as well), however the front desk very quickly delivered a few pairs of ear plugs and I had a wonderful sleep! I would recommend the Axe Lounge for cocktails and food. We particularly loved the Salmon Tartar and French Onion soup. I also drank, hands down, the BEST Espresso Martini of my life! Though there was no specific cocktail menu, the bartenders are very skilled in creating delicious cocktails to your liking. Breakfast at Comptoir was AMAZING - we were particularly impressed with the Eggs Benny and Pancakes(So fluffy!). We were welcomed by the hostess Linda, who was such a delight to speak with in the morning! She had a bright smile and a can-do attitude and was always running around the dining room assisting in any way she could. Our server Sebastian was also delightful - they selected the perfect crew to start the day on a positive note! Due to covid-19, the pool is only bookable in one x two hour block per room , per day, but we had no issues arranging times for each day to enjoy the facilities. I would suggest booking right upon check in so that you don't miss out - the pools are so warm and offer a great view of the village and gondola, and the pool bar service was a big hit! The Pina Colada was the best I've had in a while! We spoke with the lifeguard MariLou on both days and she was so friendly and helpful in suggesting things to do like the Tonga Lumina and the Luge (both of which were fantastic activities, by the way!) she went out of her way to even check the availability for us! Christian at the front door suggested a really great hike for us to do which was one of the highlights of our stay. We also signed up for the Kipsu program where you just need to text the hotel if you need anything at all- all of the interactions over text were also friendly and we really felt like royalty! I would highly recommend this hotel for any visitors that would like to experience Tremblant.

Way below par for Fairmont

I have repeatedly stayed at several Fairmont resorts in the past — Château Lake Louise, Château Montebello, Manoir Richelieu, Château Frontenac… — and have been accustomed to expect a certain level of experience quality. Unfortunately, Fairmont’s Château Tremblant was well below par. My family and I booked a suite over the weekend of Sept. 12-13 of 2020 and I was astounded by the various shortcomings, none of which are COVID-related by the way, both in terms of service and infrastructure. For instance, on the infrastructure side: - The toilet in the room was dysfunctional: It took 10 minutes for the tank to fill (we told the hotel and they did fix it but when you’re a luxury hotel, this is not something customers should have to flag). - The umbrellas were broken: While it is appreciated that a hotel would lend umbrellas to its guests (I think this is actually expected from high-end hotels, though), it would be nice if said umbrellas were actually 100% functional. - The suite was not very nice: It was OK… for a Comfort Inn. There were no amenities (except maybe for bathrobes and shampoo!), and sincerely, it felt like a bad trip to the late 1990’s in terms of style, and the furniture’s condition felt like it dated from that era. - Some big-ass wires were dangling from the roof: As we were marinating in the (very nice, I must admit) exterior pools (probably the best amenity of this hotel), we noticed what looked like big, 3 in.-diameter wires badly attached to the roof… the kind of detail that makes you feel your high-end hotel isn’t exactly high-end in terms of detail-orientation. - Internet access was troublesome: So, first, I still have a hard time believing that a high-end hotel, in 2020, would still have you pay $15 per day to get Internet access (that’s a first strike right there). But then, I’m a member of their ALL loyalty program so was told I would get access for free… which only worked for one single device (second strike). But then, whenever logging on to whatever page was displayed upon opening a browser after logging on to the hotel network, I would see a page that looked like it didn’t have a CSS or style sheet… it was only text. Not very high-end… and a third strike with regards to Internet connectivity. And then there was the service. While I did appreciate the responsiveness from the staff the two times I asked for assistance through a text message (nice!), I was not impressed by several instances, like: - The staff in the restaurant: Upon ordering food, I needed advice about which wine would best match both our very different — and harder to pair than my own experience and knowledge about wines allowed — meals. The waitress’s answer was to read me the wine list… (I can read, thank you!) By the way, selling somewhat cheap, SAQ-available $18 wine bottles for $58 while not even being able to talk about them is not only a ripoff, it’s almost a fraud. - Also in the restaurant, kids ordered apple juice… that was served in their original MinuteMaid container. I mean, I appreciate the honesty of not trying to sell this cheap juice look like it was home-made, just-pressed apple nectar, but if you’re going to price your juice at $5 a bottle, it would kind of deserve a glass. - No pillows for the sofa-bed: While it was clear from the get-go that, because there were 4 of us in the suite and only one double-bed, my 2 kids were to sleep on the sofa-bed, my experience with other high-end hotels around the world (like Germain hotels or also Accor-related Sofitel chain) had me expect that the sofa-bed would have been taken care of without me having to ask for anything. While the sofa-bed did have sheets and a duvet in it, there were no warm covers and pillows to be found in the room… and so I had to ask for them to be delivered to the room. - Then there were several little incidents, like when we asked for some Advil to be delivered to the room and, after waiting for an hour, we inquired about when we should expect delivery, only to be told that someone had in fact come up and no one had answered. (There were 4 of us in the room, and no one ever heard a knock… so that had to be a lie. Plus, you would expect that, should nobody have answered, they would have called the room to inquire if we were still interested in said Advil, right…?) - Or the fact that, when I showed up with a dog, the people at the reception never said anything about a $40 fee. (I don’t care about the charge… I would’ve appreciated knowing about it, though!) But I think the worst part was when, upon checking out, the lady at the counter asked how had been our stay, and I started explaining what you just read above. Despite being served essentially the whole story, there were no apologies, no indication that someone higher-up would contact me for further information, no additional comment then ‘’Thank you for telling me. That’ll be $1000. Would you like to use the same card you used upon checking in?’’ This hotel is exceptionally well below-par in terms of service, especially in light of the expectations they set on their website. There are nice things to this hotel — the pools, the big fireplace in the lobby bar, the location — so book it if you must, but manage your service expectations accordingly. 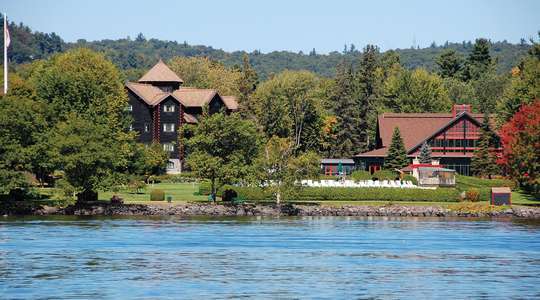 Shaped like an asterisk, this historic log-built chateau on a wooded estate in Montebello Village is set half way between Ottawa and Montréal on the banks of the Rivière des Outaouais, or Ottawa River. The resort is surrounded by beautiful countryside and offers a wealth of activities including golf, fishing, hiking in the spring, summer and autumn and cross country skiing, dogsledding, tube sledding and snowshoeing in the winter. 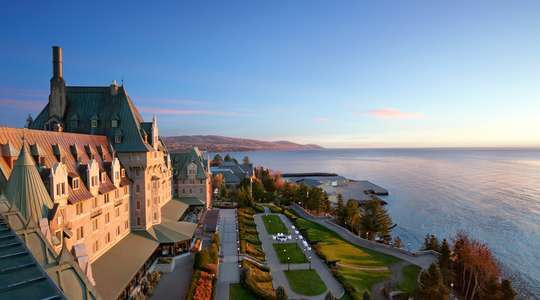 In the heart of the Québec province’s Charlevoix region, approximately 85 miles along the Saint Lawrence River from Québec City, sits the historic Fairmont Le Manoir Richelieu. Built in the late 1920s and surrounded by forested countryside, the resort has an outdoor terrace which offers views of the St. Lawrence River. There’s plenty of activities on offer from winter horse drawn carriage rides and snowmobiling to golf, fishing and cycling in the warmer months. 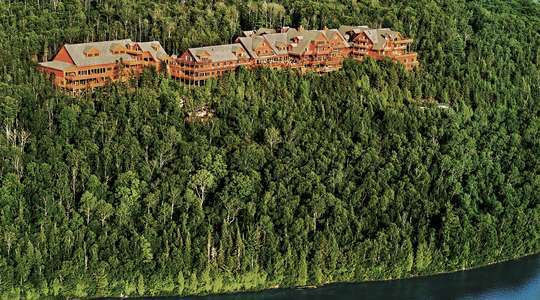 The beautifully secluded Hotel Sacacomie sits on a private lake, a couple of hours from Montréal. This treś chic wilderness lodge is perfect for nature enthusiasts and those who wish to get away from it all. There’s a fantastic spa as well as plenty of watersports like kayaking. Outdoor activities are the area’s big attraction and include hiking and biking, boating and horseriding. Facilities at the lodge include a bar and restaurant, as well as a beach and spa. There's also the option to book packages like the three-night Summer Adventure Package, which includes activities like a bears and beavers observation tour.