Memorable for the right reasons

Very spacious room, with excellent views of the city. Amenities provided in the bathroom were from Le Labo, very heavenly. Despite the showerhead being a little noisy everything else in the room was modern and well maintained. I was able to get a good night's rest on each occasion because little to no noise could be heard from the other rooms. The pool was another plus and I recommend a late-night dip with friends.

The hotel has the sense of opulence you'd expect. The Fairmont's grandeur remains undimmed by the passing of time. Walk through the front doors of the Georgia Street entrance and prepare to be dazzled by an enduring piece of Vancouver history. It's hard to be disappointed walking into the Fairmont Vamcouver. The aesthetic of the rooms at the Fairmont isn't exactly wild and crazy—they're big on neutrals—but they are elegant. The Fairmont's concierge makes great recommendations, particularly if you request dining options that locals frequent. Within a two-minute walk of Robson, Alberni, Burrard, and Granville streets, four of the city’s main shopping and strolling areas, the hotel keeps much of what you’ll want to explore within an easy taxi ride away. You’re also within two blocks of the two main downtown Skytrain stations.

The hotel location is good and convenient, everything else not so much. Our room was far down the hallway and it’s cold. Very outdated facilities. Don’t get me wrong, I like old buildings, but the outdated ones. The room soundproofing was very bad. The service was really bad too, except for the concierge. Breakfast was good and plentiful. I’d love come back one day! Hopefully I’d be amazed the next time

The Vancouver Hotel is at one of the anchor points in the downtown core, located at the corner of West Georgia & Burrard, streets which have long been two of the city core’s most important routes, both for across-city access & for the businesses located along them. It has a long history, built early on in the past century by Canada’s Railway Company, which built a number across the country in the Chateau-style, exhibited by the VH. In the some 100 years of existence, VH has gone through a number of renovations, most recently of its foyer, lounge & bar area, readying itself for the new mood of the 2020s. I have had a long & variety history with the hotel since immigrating to Canada; the first of which to set up a bank account at the Bank of Montreal, which then had a branch within the VH building. The VH has a number of high-end retail shops on the ground floor, with windows facing Georgia or Burrard, for passerbys to window shop, if that is still a thing in the 21st century. In those early days, my husband & I would pop into the bar when we could, where many of the bartenders have served for decades, often learning interesting facts about the city. Then I discovered one could use the pool on the top deck for a small charge, &, as an avid swimmer, was up there in a shot in the months when the Kits Pool was closed especially, usually with my close, artist friend, who lived close to the VH & liked to dip. It was a nice, mostly quiet, place for us to swim, lounge & bounce ideas. Another discovery was that the VH had ballroom dancing at the weekends, with Vancouver legend, Dal Richards, & band providing music to practice one’s steps, or to show them off, depending on one’s level of expertise. I had talked my husband into taking some ballroom lessons together, happily provided literally step from our home at U.B.C.’s family housing complex in which we were living while I was doing a PhD. I thought we may be ready to try out our dancing skills, which we did, on a Valentines’ Day, spending the night at the hotel & ending with a full English breakfast. VH serves breakfast, brunch, lunch & dinner, in its 3 different eateries, ranging in food offered & mood. I also had the opportunity to glimpse the internal workings of the VH when a client of mine was running events at the VH, so as to obtain results for a dissertation he was doing..Hotel operations ran like clockwork, with staff always helpful & friendly. More recently I have popped in for a nibble & drink as the bus I catch to visit my family in Ucluelet lets me off at that corner. There is a good taxi rank behind the hotel & bus stops close by on both streets. A good spot surely to visit once it reopens, as it, like many hotels, has closed for now in the face of the pandemic. Posted by S Fuller

Fairmont is my kryptonite.....

Why, oh why, do I do this to myself? You’d think I’d learn. Travelling all over as I do. You’d think. You really would. But, alas, the Fairmont chain is my kryptonite. Needed somewhere to stay. Quickly. Downtown Vancouver. Stayed here. And won’t do it again. Let me be brief. Cause if you’ve read this far you really don’t want me going on at length. Charm and old building? 9/10. Amenities and value for money? 2/10 I don’t mean overall value. I mean relative value. Lots of places are more expensive. But for $650 for two nights you’d think they’d include a fan in the small, old bathroom (as opposed to an old steel passive vent that likely stopped working in 1967). And the bottom of the shower/tub looks like something that’s waiting in line for a retrofit in a social housing project in Baltimore. Free wifi is so slow that you have to consider the possibility that it’s done on purpose so you want to upgrade to the one you have to pay for. And who actually charges for wifi anymore? So, in conclusion, for the money you can get much better in this city. If you like old bricks and charm, stay here. But if you would like to avoid almost literally travelling back in time to 1890, don’t. 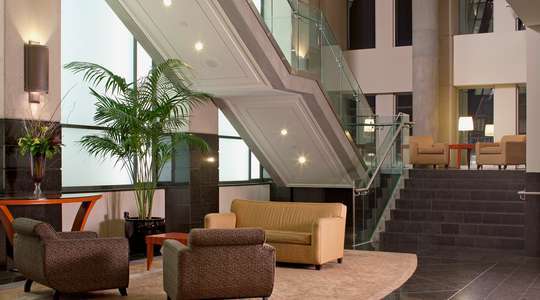 This all-suite hotel is located in the heart of downtown Vancouver, close to the city’s harbourfront and convenient for the cruise terminal and train station and many of the city’s prime sightseeing and retail attractions. As an all-suite hotel, this hotel is perfect if you are looking for a bit more space - perhaps for an extended stay. You can enjoy spacious accommodation with each room featuring a bedroom and separate living area. 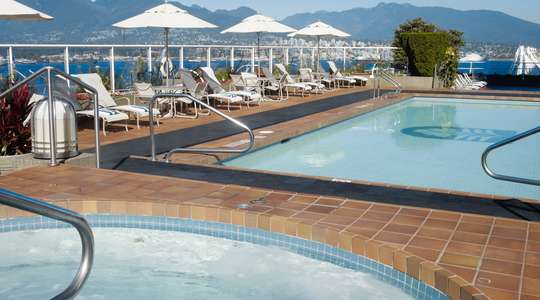 In a prime position on the city’s waterfront, the luxurious Pan Pacific sits right on the cruise ship terminal. If you are heading off on an Alaskan cruise you couldn‘t find a more convienient location. A highlight here is the spectacular rooftop swimming pool which offers fabulous views across the harbour, along the city skyline and to the mountains beyond. If you can tear yourself away from the rooftop there's a beautiful spa and water-front café. 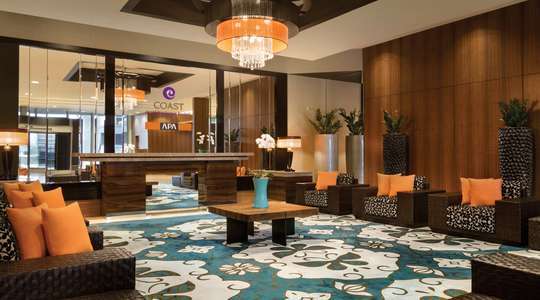 This contemporary urban retreat stands 20 storeys high close to the waterfront in downtown Vancouver. There is Prestons restaurant offering Canadian-inspired comfort food created with locally sourced produce, and a roof deck with a pool. Stanley Park, the  historic Gastown district and the shops of Robson Street are all within easy reach of the hotel. Rooms are bright and modern, and the views from the harbourfacing rooms are well worth the upgrade. 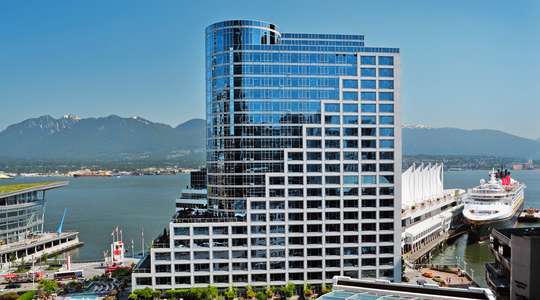 You can‘t get a much better location than The Fairmont Vancouver – you‘ll be right on the waterfront, just a stone‘s throw from the cruise terminal and a few blocks from the heart of downtown. As you would expect from Fairmont, this is a superb hotel with fantastic service, spacious rooms and plenty of facilities including al fresco dining, a bar and an outdoor swimming pool. The rooms at the Waterfront have all been beautifully renovated and have large picture windows and plush furnishings. We recommend upgrading to a room with views out over the harbour, particularly the Signature Harbourview Room or the Fairmont Gold Harbour View Room. 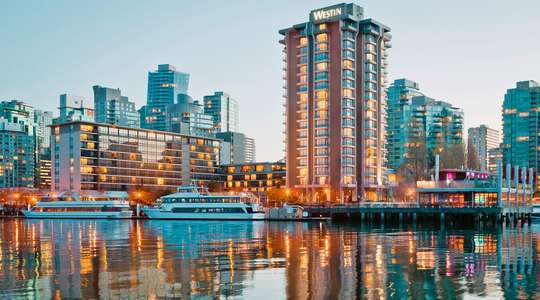 In a city surrounded by water there are plenty of waterfront settings to enjoy. The Westin Bayshore has to have one of the prime locations in the city overlooking the busy harbour the Royal Vancouver Yacht Club and the verdent Stanley Park, all of which can be reached on foot with ease. The rooms here are modern in style with a selection of rooms featuring harbour and park views. 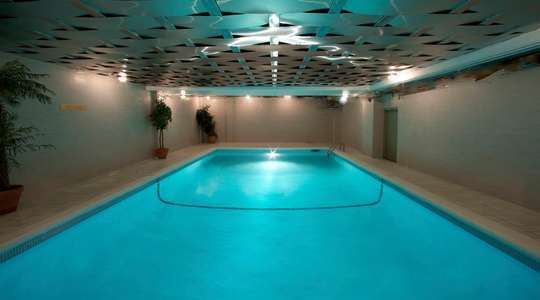 Both welcoming and in a convenient location at the heart of Downtown, this hotel is a popular and great value Vancouver choice. You will be just a short walk from the shops and restaurants of Robson Street, and the BigBus hop-on hop-off tour bus stops right outside the hotel. For relaxing days the hotel features an award-winning spa, an indoor pool and steam room. 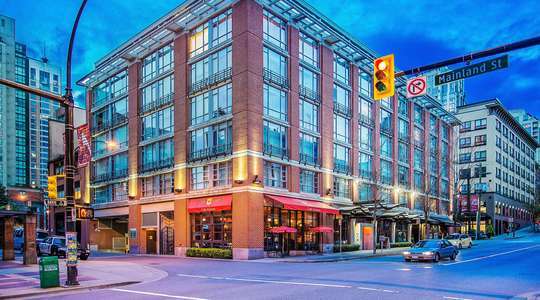 Bold, bright and boutique are the watchwords at this highly-thought-of Vancouver gem. There are just 96 rooms each with incredible modern décor that oozes with style. The service is definitely something to write home about - it’s personalised and friendly but unobtrusive; it’s more like a friend welcoming you rather than hotel staff; that’s what you get from a family-run property. The Opus also comes highly recommend – it has received plaudits from the likes of Forbes, TripAdvisor and Conde Nast Traveler. There’s an onsite restaurant that’s open at lunch and dinner, and a bar that’s become one of Yaletown’s go to venues. There’s regular live music and DJ nights at the weekend, but in the mornings it’s a cosy hangout serving that all-important first coffee of the day. There are bikes that you can use to explore – a fantastic addition as two wheels is one of the best ways to see Vancouver. 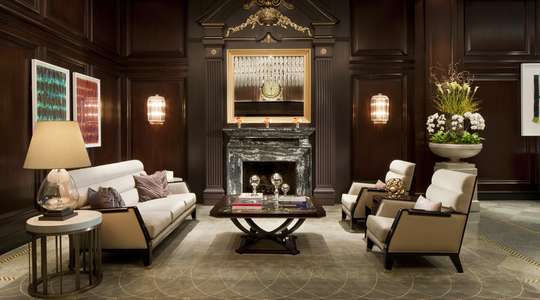 Days in Vancouver are guaranteed to be jam-packed with adventure from as soon as you wake up until you sink into bed in the evening. There are plenty of hotels that are just a base for your your explorations, and then there’s the exquisite Rosewood Hotel Georgia; you’ll be doing yourself a disservice if you don’t set aside some time to spend here. Relax at Sense®, A Rosewood Spa with its uber-cool swimming pool and extensive treatment menu,  soak in your room’s free-standing tub or gain entry to Prohibition, a sleek and sophisticated speak easy-style cocktail bar the reflects the hotel’s heritage. You should also dine at Hawksworth at least once during your stay at the Georgia, particularly if you have a special occasion to celebrate. It’s the hotel’s signature restaurant and one of the finest in the city, and the menu is a celebration of Vancouver’s culturally diverse cuisine. The style here is pure class. There’s the beautifully restored Art Deco design, the dark wood wall panels, the unique lobby chandelier and the plush furnishings; you can almost yourself sitting a couple of seats away from Sir Lawrence Olivier, Nat King Cole, HRH Edward, Prince of Wales or any other of the hotel’s illustrious former guests. And it’s not just the fixtures and fittings that delight – the service goes above and beyond from the moment you’re greeted by the doorman and seemingly step back into the Roaring Twenties (complete with free Wi-Fi and many more of modern life’s necessities).