Had a wonder stay at the Oswego!

We had a wonderful stay ! Very chic boutique hotel. Very comfortable bed and pillows. Lovely to have a kitchenette in the suite as well . The staff were very kind and helpful. Highly recommend this hotel!

Top of the line customer service!!

If you are looking for a hotel that is in the heart of downtown Victoria with top-notch customer service that is also pet-friendly, then Oswego is your place! Erin, Jovel, Carolyn and Nathan were so friendly and over-the-top with excellent customer service! Josh is an amazing chef and even baked special shortbread cookies for the guests on Christmas day! The entire staff is so lovely, including Rebecca and Mark in the restaurant and Naomi and Marvin in housekeeping services!! The customer service and their attention to detail is what made this hotel experience number one for me! Thanks to the entire Oswego staff for making my stay so special!

We really enjoyed our stay at the Oswego Hotel. Our suite was great. Very comfortable and clean. The staff were so accommodating and friendly. We had a delicious meal from the Bistro delivered to our room. I would definitely recommend this hotel. The location is perfect for exploring g Victoria.

Local winter get away

I loved every aspect of the Oswego Hotel. Staff was very friendly and helpful. Everything that we requested was granted. Rooms are very cozy and having a full kitchen is very handy. We spent a wonderful Christmas time! 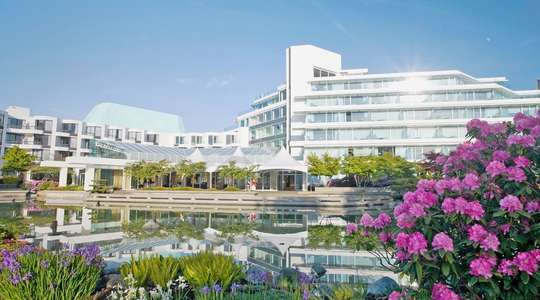 Surrounded on three sides by Victoria’s charming harbour, the contemporary Inn at Laurel Point is within easy reach of downtown and offers fantastic views of the water around almost every corner. The inn’s setting also means that most of the rooms and suites have views of the harbour. Facilities include the Aura Waterfront Restaurant, a glass-enclosed indoor pool and a tranquil Japanese garden. Original native and Asian art is showcased throughout. The accommodation here is modern and bright, especially the studios and suites located in the highly-recommended Erikson Wing. The views of Victoria are pretty spectacular from each and every room, and you can enjoy these vistas from your private terrace or balcony. 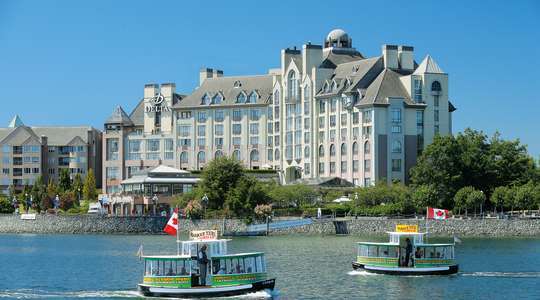 Standing resplendently on Victoria’s inner waterfront, overlooking downtown Victoria, this bright, modern hotel has plentiful facilities including an indoor swimming pool, tennis courts and a spa. LURE restaurant specialises in fresh seafood and has wonderful harbour views, while the rooms are modern in style. We highly recommend choosing one of the water view rooms or suites for views over the harbour. 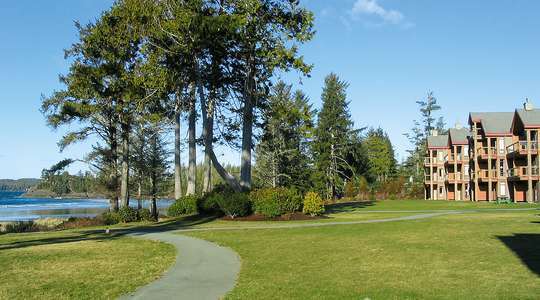 In a wonderful location on the peaceful Mackenzie Beach, just over a mile from the heart of downtown Tofino, this charming resort is located in the traditional territory of the Tla-o-qui-aht First Nations. The hotel is an ideal base for enjoying outdoor activities in the nearby Pacific Rim National Park. If you would like to head out on the waters of the Clayoquot Sound you can hire a paddle board from Mackenzie Beach or try surfing and body boarding. 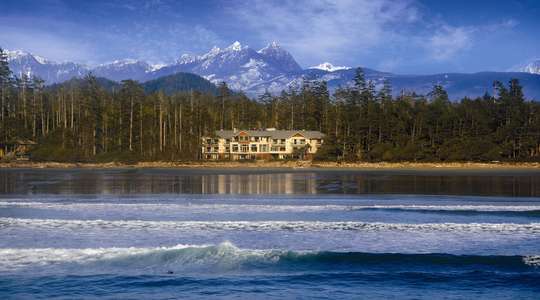 On the rugged west coast of Vancouver Island approximately 4 miles from Tofino, Long Beach Lodge is set within eight acres on an expansive sandy beach and is designed as a ‘home-fromhome’. The Great Room offers locally sourced cuisine against a backdrop of ocean views. Surfing is a popular pastime here as Cox Bay is one of the best surfing beaches in Canada. Surfing lessons and board rental are available from the on-site surf club. 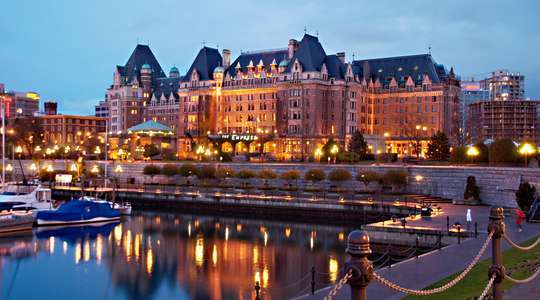 The multi award-winning Fairmont Empress is an landmark hotel with turn-of-the-century architecture and a prime position on the waterfront of Victoria’s Inner Harbour. It's one of Vancouver Island’s most celebrated properties and it embraces tradition – scheduling in an afternoon tea here is de rigueur – yet its interiors are surprisingly chic and befitting of the 21st Century. We love that you can step straight out the door and into the heart of the city with the Parliament buildings to your left and the bars, restaurants and shops in the network of streets to your right. Straight ahead is the Inner Harbour where the small toy-like ferrys, whale-watching cruises and sea planes go back and forth. Like all Fairmont hotels, the Empress is home to the a beautiful spa with its marble floors, grand décor and menu that's full of signature treatments and muscle-melting therapies. As part of its recent reimagining, the hotel gained a wonderfully casual dining venue, Q At the Empress. It replaced a more stuffy grand dining room and it now fully embraces the food of the Pacific North West. And why not when the hotel is so close the source of the produce? It has its own roof-top garden and a menu which features unfussy sea food, meat and vegitarian dishes. Our favourite spot to dine is The Veranda - an open-air extension of Q at The Empress that overlooks the Inner Harbour. The adjacent Q Bar has an extensive wine and cocktail dishes and an old world-meets-new world ambinace. Waking up to views over Victoria's Inner Harbour is one of our favourite Vancouver Island expeirences so we highly recommend choosing one of the Fairmont Rooms which overlook the water or a spacious Signature Harbour View Room. A new addition to the hotel are the Fairmont Gold Rooms. As well as a complimentary breakfast, you'll be able to enjoy private check-in and access to an exclusive water front lounge. Again, we suggest upgrading to a Fairmont Gold Room with harbour views. 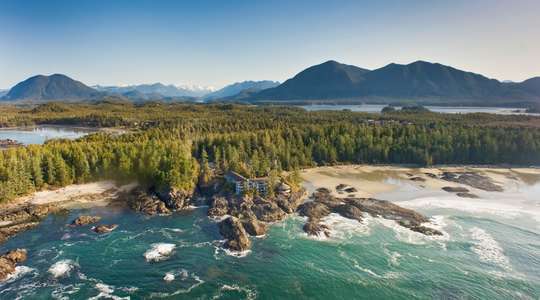 It’s hard to think of a more spectacular setting than that of Tofino’s 'Wick Inn'. Sitting on the rocky west coast of the Esowista Peninsula on the edge of the Pacific, it overlooks the often beautifully-deserted Chesterman Beach and is almost completely surrounded by the forest. It feels as if you're perched at the edge of the world. As you would expect, the Inn really makes the most of its surroundings. This stunning stretch of coast Tofino is at its busiest during the summer months; however, winter storm watching is a serious business here and the Wick is the front-row seat. Get yourself a hot chocolate, get cosy by your room's fireplace and watch as rollers crash over the rocks. This is mother nature at her wildest. The Point Restaurant is a delightful space which has 240-degree of the Pacific Ocean. The menu is focused on West Coast dishes – think sea food and succlenet meat dishes – created with fresh and locally-sourced produce. Make sure you save a bit of space following your main course as the dessert menu here is very well thought of. 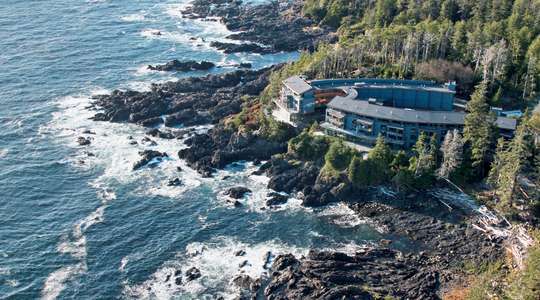 The Black Rock Oceanfront Resort is located on a headland on the Ucluelet Peninsula’s rocky west coast – right on the Wild Pacific Trail. This is the perfect base from which to discover Vancouver Island’s natural landscapes, whether by foot or boat. The architecture is inspired by the land and sea, with rock, glass and wood elements used throughout. The views from restaurant, bar and many of the other public areas are quite simply breathtaking. 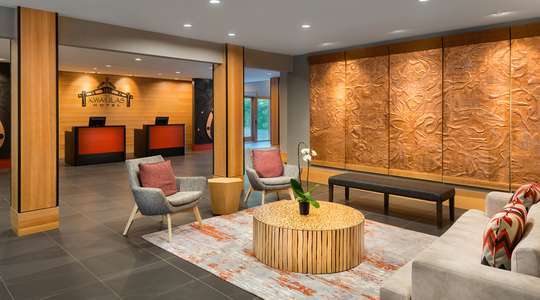 Port Hardy is the gateway to the inlets and islands of the Broughton archipelago and British Columbia's Great Bear Rainforest. You’ll need a comfortable base to head out on your multiple-night wildlife-seeking adventures and the Kwa'Lilas Hotel, which translates to ‘a place to sleep’, is just that. Although it’s a wonderfully modern hotel, there’s a real focus on the region’s ancient First Nations culture. The onsite restaurant Ha’me’ has a menu full of dishes inspired by the Aboriginal tastes and flavours and elders share their stories over a drink at the hotel’s bar, Nax’id.