Service when something goes wrong is abhorent

My truck was broken into in the parkade of the hotel on March 16, 2020. I realize the break in is not The hotel’s fault; the reason for this negative review is because of the behavior and response of the hotel management and staff: At all levels management and staff exhibited neglectful, abhorrent, uncaring behavior to an extreme extent: The hotel security guard walked by the scene at some point in the morning before I did, took a video of my ransacked vehicle and contents on the ground, and then walked away, and did nothing – did not report the crime, secure the scene, or locate the owner. They were happy to provide me with a copy of this video in the hopes that it would help! I still had to wander through waterfront park on my own looking for my belongings, some of which I found. In response to this matter the hotel staff have not responded. They have refused to reimburse me for any of the items stolen, or offer to cover my damage deductible, or offer to refund any part of my stay, notwithstanding that I left a day early (because I was upset) and ended up paying for a night that I did not stay. For a four-star resort; not only do they lack regard for the security and wellbeing of their guests, they don’t even seem to comprehend the concept of common human decency – if I saw a vehicle in a parkade that had clearly been broken into, I’d do something about it, and I’m not a security guard! In particular, the hotel operations manager, Jamie, feels that an “acceptable personal effort” is to allegedly forward my emails to her superiors – no follow-up; click forward, click send, done – apparently this is how the security guard was also trained. Other than that, the hotel is clean, very nice and the location is amazing.

I was expecting more from this resort Vacation Club

I must say that the first impression I got from the unit is being stranded in time. I has a look from way back when contemporary was merely a concept... It looks like it hasn’t been renovated in the last 20 years, not that it’s in bad shape, just an outdated look... The worst though was with the handling of the CoVid19 crisis. There are computers in the hallway where you can print your boarding pass or go on the Net if you need to. I wiped the keyboard and mouse to disinfect it and guess what? I think it hasn’t been cleaned in months, look at my picture of the wipe... We are in crisis time with that virus, I would expect Marriott to be on top of the cleaning spree on such thing as public computer keyboard and mouse... Another thing, we have lots of small ants in the room.

I had the opportunity for to attend a conference at this establishment in November, and was amazed at how they truly value their guests and their experiences. Thank you to the staff, especially Curtis, for making things right. You are a remarkable asset to this establishment. We will be back to do a wine tour, and I will book Delta Grande.

It has gone downhill, is over-priced, and we will not return

We have been coming to the Delta Grand for years, and had always had excellent visits. However, the last time we went (October), it was almost comically bad. Rather than writing a bad review, I sent an email to the customer service team, outlining the issues that we had encountered. I hoped that they would address the problems, they advised they had, and we decided to give the hotel another try (February). They had asked that we let them know if we did return, so that they could ensure that they would exceed our expectations. I did, but they didn’t! Sad to say, some but not much has improved. To be fair, the front desk staff appear to have been retrained, and our check in went smoothly, so that was an improvement. Ditto on check out. The rooms are still in need of a refresh, and a deep clean would help as well. One of the glasses in the bathroom had a stain in it (we just washed it ourselves), and the bathroom mirror still had splash stains on it. The carpet had bumps, and as per attached photo, the sheer curtain in one of the windows had a big rip and hole; most other higher end hotels would replace the curtain, but Delta seems to be in the “save money where you can in order to turn a bigger profit” mode , so the hole that was there the last time we stayed in this room – at least a year ago – is still there. I didn’t use the pool and fitness room, but my husband did. Whereas on the last visit all the shower stalls had at least something missing – shampoo, conditioner or soap – this time at least the supplies were there. The last time, one of the shower tap handles was broken, and this too had been fixed. But he advised that the rooms were still a bit grubby and run down, and in need of a deep clean and refresh. Probably my biggest complaint is the lady on the club floor – older, small, with short brown hair. She exhibited attitude and unhelpfulness the last time we were there (granted, it was busy and she was on her own, so maybe she was frazzled) when I asked what was gluten free. I explained that I had celiac disease and needed to know. She actually said – “I have no idea, and the kitchen doesn’t know either….even the corn chips, since we have thrown the bag away”. I was very taken aback by such disregard for a serious illness, and disrespect and annoyance for a customer. We left and went instead to have a drink and snack down at the Oak and Cru restaurant by the main lobby, and they were amazing! On this “second chance” visit, I was hoping that things would have improved….hmmmm, not too much! I asked about what snacks were gluten free, and she did confirm that 1 was, but for a couple of the others she said “I think….” And “you should be okay with these…”. I guess further training is needed for the staff to understand that with celiac disease, and with food allergies “I know… and “you are okay….” Is what they have to get to, not “I think….” and “you should be…”. She was perfunctory in her manner, and was definitely not friendly or smiling. This may be perverse, but I actually gave her a good tip on the glass of wine and bottle of beer that we ordered, just to see if it would change her demeanor and maybe bring a smile…nope. On the plus side, the woman who attended the club floor the next morning (sorry, didn’t get her name….she looked to me like Kate Middleton, and had been told before that she looked like Shania Twain) was amazing! Very natural and friendly, informative and helpful….just excellent. Many of the other negatives (which I think are just ways for the hotel to save money) are still there – they no longer offer newspapers, the lounge only has 1 option for white wine, and only 2 for beer, room service is still very limited and expensive and comes in plastic packaging. It is really too bad, because the hotel is in such an excellent location, and really could be something special (as it once was). The cost of our mediocre 2 day getaway was well over $800.00 (off-season prices...it is waaaay more in high season), and that is just too expensive for what you now get there for your money. We will not be back. 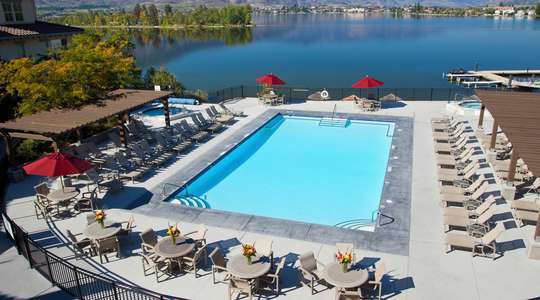 On the shore of Osoyoos Lake this charming resort offers guests a range of facilities as well as a small and sandy private beach from which you can take a refreshing dip in the lake or enjoy an evening around a fire pit. You can choose to dine on tapas dishes at the restaurant, or source your own ingredients and enjoy a barbecue. During the summer season there are often barbecues held in the pool deck.