Delve into Cambodian history at Phnom Penh’s eclectic and landmark hotel, in a superb central location.

This grand hotel is in a fantastic spot at the heart of Cambodia’s vibrant capital Phnom Penh, just steps from the 27-metre-high pagoda and Buddhist temple Wat Phnom, and close to the intersecting Tonle Sap and Mekong Rivers. It has a rich history dating back to 1929 and is built around a central private courtyard with two swimming pools fringed by Frangipani-lined tropical gardens. A distinctive blend of Art Deco and French Colonial styles set the hotel apart, including a high-ceiling lobby with pristine white décor, glitzy chandeliers and palm trees. The hotel is also home to the superb Elephant Bar, once a hub for journalists in the build-up to the infamous period of Khmer Rouge control over Cambodia. There’s incredible attention to detail here, with artwork depicting the hotel’s role in Cambodian history and dozens of custom-made cocktails to indulge in — the signature Femme Fatale was created for Jacqueline Kennedy during her visit to Cambodia in 1967. It’s this unmistakeable old-world character and sense of intrigue which make Raffles so appealing.

There’s a good range of restaurants and bars to choose from. Dine in style at the prestigious Restaurant Le Royal, known for its enticing blend of Cambodian and French cuisine with recipes which have been handed down to the hotel by Cambodia’s Royal Palace. Café Monivong has tempting buffet dinners on Friday and Saturday night, while The Conservatory serves traditional afternoon tea and light refreshments with live classical music.

The rooms are elegant, with colonial features including sleek wooden floors and cabinets, soothing pastel walls plus golden curtains and pillows. Some of the newly refurbished State Rooms have a balcony offering views over the pool or gardens.

In a central position in Phnom Penh, just over a mile away from the striking National Museum and Royal Palace

This hotel has a wheelchair accessible room.

• Take a stroll to the nearby Buddhist temple Wat Phnom, the capital’s central point and tallest religious structure* • Book an indulgent Le Royal Spa Experience, including a mineral salt scrub and a revitalising Khmer massage*.

Half Board from £40 • Dinner at the main restaurant

Full Board from £83 • Lunch and dinner at the main restaurant. 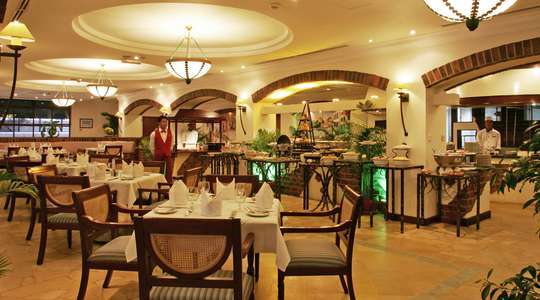 Experience a warm welcome and gracious hospitality at this comfortable hotel which is ideally placed for local exploration. The renowned 14th-Century Wat Phnom temple is just across the road and there are plenty of local tuk-tuks on hand to whisk you to the historic riverside or any of the local attractions such as the Royal Palace, the Silver Pagoda or the Tuol Sleng Genocide Museum. When you're not out and about exploring you can unwind in the spa or relax in the Jacuzzi. Watch the hotel's chefs creating local dishes and international favourites at the all-day dining Sun Café Restaurant, with an open kitchen and à la carte and buffet options plus special themed buffet dinners. Sink into a comfy armchair in the relaxed Lobby Lounge  and enjoy cocktails or catch up with the latest sporting events on the big screen. Stop off at the deli to treat yourself to a selection of pastries or buy some freshly baked bread to take away – the perfect snack to keep you going during a busy day of sightseeing. All of the rooms are simple in design but spacious and comfortable with modern  amenities including air-conditioning and Wi-Fi. Each room has city views and it is worth upgrading from a Deluxe Room to a Deluxe Balcony Room if you are looking for extra space. Interconnecting rooms are also available.