Nice option in the Pantanal area.

The property is huge and well kept. There was a huge fire in 2019, but the forest has largely recovered. Accomodations were simple, as the food. We had some issues with housekeeping; AC did not work properly, as well as the shower. The safaris were interesting. This is not a zoo, and thus wildlife spotting is ramdom. We saw the jaguars, macaws, "queixadas", lots of birds, etc. Although the jaguars are highlighted there, this is more likely a paradise for bird watchers. We got there in an extremely hot period. Would likely had been better if visited in JUly. The fires around the property added lots of smoke to the air, which coupled with the high temperature (over 40 degrees Celsius) was not a great combination. They sell an optional tour called "Oncafari". There was not much difference between the "Oncafari" and the regular safari, except for the lectures, that were really great.

We stayed for 4 nights as a couple at the Baiazinha lodge. Amazing! Due to COVID, we are the only guests at the hotel. Everything was very well taken care of. Super friendly staff, great food and very comfortable lodge, overlooking the lake. What a show of wildlife during the safaris, with 3 jaguar seeings! We loved every minute of it!!!

Stayed in the main lodge [owners house] - stunning property. Proper pool for a decent swim. Staff great. Quality of food very high. The different lodges also share some evening meals including a churruascario with music, and a meal in a lighted grove. The B lodge was open and looked lovely. All rooms with a view over the lake, small verandah and hammock. Really lovely lounge, a deck and a pool. The C lodge was closed after the fire. We also had drives with Oncafari as well as the lodge. In total over 4 days / 5 nights - 10 different jaguars, anteater, tapir, lizards, tonnes of birds. Half a day with the hyacinth macaw project which was really interesting and the opportunity to see a chick up close. Also to plant a tree that in 50 years will have matured enough to provide a cavity for the macaws to nest in. Caiman is recovering from the devastating fire, and as above there are still plenty of animals and great sightings. Very very good stay.

Even in devastation they were magnificent

Staying in Baiazinha Lodge was incredible. With all the guest arriving on the same day for the same duration means we all explored the environment together. The Lodge itself with its own manager is a delight, large recreation areas, the deck and pool. Our room overlooked a large tree on the lagoon where up to 300 white egrets would roost, flying away from about 5.30 (worth getting up for!) The food was excellent and plentiful. We had shared afternoon/evening game drive the day of arrival seeing an amazing array of wildlife and birds. We had book a shared Oncafari and we were lucky enough to find 2 different Jaguars and their cubs, along with rafts of birds and four legged beasts. The 2nd day we had a private Oncafari, which was fantastic, our guide was incredible, and our driver was a guide on the Maned Wolf Project, we learnt so much. Sadly, and devastatingly that day the fire that jumped the river started to consume the reserve and after lunch we were evacuated to The Old Farmers House, the rooms were enormous, with large enclosed indoor terraces. Set around a courtyard with central pool, we were advised this was Jaguar territory too so no wandering around alone at night – plenty of scat as proof! We were escorted at mealtimes (when dark) over to The Owners House for all our meals. The guest from Cordilheria had been evacuated here. The staff worked tirelessly to keep up safe and informed as to what was happening. There was absolutely no drop in the standard of care, All staff were all devastated by what was happening in the reserve with the animals and the fauna. The staff that live within the estate had all also been evacuated from their homes. Given the devastation that was unfolding the way we were treated / looked after / kept informed / offered new lodge locations was incredible. They liaised with our Brazilian and UK agents about onward connections. They way they held it all together is exemplary. I would love to get back there one day and finish what we started because what we did see blew us away.

As veteran nature enthusiasts, we researched long and hard for places that offered high-end accommodations, key amenities, good food, low guest count, beautiful environments, an ethical approach to conservation and - most importantly - a high density of wildlife. Caiman Ecological Refuge checked all of those boxes, and then some. Of the two lodges at Caiman, we felt that rooms at Cordilheira Lodge offered more space and comfort, and we were not disappointed. The property is stylish, comfortable and well maintained; it's very reminiscent of the nicer safari lodges in Africa, which is sorely lacking in the Pantanal. At Cordilheira, the suites have separate bedrooms and living rooms, which is key for allowing Mrs. KI-NRT to sleep in peace while I go over the hundreds of photos I shoot at every outing. The rooms are completely sealed from the elements (like most Pantanal lodges), and have very functional air conditioning, which came in very handy during the midday that can approach 40C. The rooms are solidly built with good privacy, and with good noise insulation, yet is just a very short walk to the common area. Everything is stylishly adorned, from the furniture to the carpets to the paintings on the wall. The decor was definitely a highlight of this property. Service was very polished... The English skills of the staff were excellent, and they were warm, professional and catered to our every need. It is readily apparent that Caiman definitely attracts the best guides and service professional from all of Brazil. The evening that we arrived, they gave a nice presentation of the Pantanal, the environment, various conservation initiatives, the history of Caiman Ecological Refuge and its flora and fauna. The vehicles were open air with high canopies, which are perfect for viewing and photographing. They're also modern and in good shape - similar to the ones you see prowling the savannas of Africa. We chose to go on a private outing for three of our 4 days at Caiman with Onçafari, a team whose mission is to protect Jaguars via habituation, a process by which jaguars become gradually more tolerant of humans and vehicles, which both helps in the research of these charismatic felines, and helps increase tourism that results from the increased sightings of the big cat. We learned a great deal of Onçafari's various initiatives, the Jaguars it researches (we now know many of them by name) and had a chance to track some of the cats that have been radio collared. We also got to visit an large, enclosed area that is being used to train Jaguars to be functional in the wild (they are often ones that have lost their mothers that were killed by farmers or poachers), and were lucky enough to get a glimpse of Jatobazinho, a shy young male that is currently in the process of being "re-wilded." By no means, however, is Onçafari a Jaguar-only experience. Mario Nelson and Stephanie (our private driver and guide) were adept at spotting a variety of animals, including Tapir, Giant Anteaters, Black Capuchin Monkeys and a whole host of awesome birds, including the Hyacinth Macaws. Speaking of the Hyacinth Macaws, we spent the final morning going out in the field with Kefany and Lucas, two members of Arara Azul (I.e. Hyacinth Macaw Project), a Hyacinth Macaw research and conservation organization. Over the course of the morning, we learned about their habitat, the threats they face, and the work being undertaken by Arara Azul to protect the species. The food was buffet style, but of high quality. When you consider that Cordilheira Lodge only has six guest rooms, the sheer variety of dishes that they offer at every meal is astonishing. Not every offering is amazing, but the overall quality is high and there should be enough on offer to fill the belly of most foodies. Those (like us) who seek a Singita, Great Plains or Wilderness Safari experience in the Pantanal, Caiman is as close as it gets. Even if it's not what you're looking for, the exclusivity, the high density of Jaguars and the various conservation projects taking place at Caiman makes it worth the splurge. 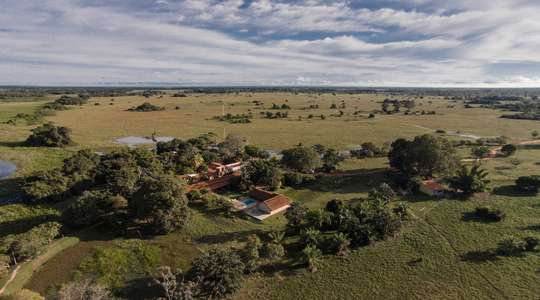 This charming and rustic lodge in the northern Pantanal has been built in harmony with the natural environment and provides a comfortable base for a three-night wildlife adventure. Wake to the sound of birdsong and enjoy an early breakfast on the deck before setting out with a naturalist guide to explore the world's largest tropical wetland area. In keeping with the lodge’s eco-friendly ethos, group sizes are kept to a maximum of ten guests during activities such as birdwatching, hiking, canoeing, horse riding, piranha fishing, photo safaris and night tours. Cool off from the midday sun in the small pool or in a hammock on the shady terrace. Follow walkways to one of the lodge’s observation towers and keep an eye out for wildlife such as hyacinth macaws, howler monkeys and coatis. These treetop lookouts are also a great spot for catching the spectacular sunrises and sunsets over the wetlands. The restaurant serves hearty local cuisine with a buffet of meat, fresh fish and organic vegetables to keep your energy levels up and you can reflect on the day’s adventures with drinks on the terrace. The simply furnished rooms feature air-conditioning and you can sometimes spot wildlife right outside your doorstep!