A well located hotel. Arrived late and could not find the room service menu which I later found out was a virtual menu accessed through the tv but there were no clear instructions advising of this. Ended up raiding the mini bar to find around half of the snacks out of date - to the hotel’s credit they did not charge for them after I advised them of this. Shower above bath with a shower curtain is not acceptable for a hotel in this brand category and is for me the biggest turnoff.

Is there service after Covid?

The border shutdowns have made travel so difficult, so we were super excited that we could actually get away for Easter. It was our first trip since January 2020 and was a return to the hotel. The check in process was easy and touch free, with Covid safety in mind. We were disappointed the Club was no longer operating and never made it to the public bar it now is. This meant that being a Spire Elite Ambassador was of no advantage at all. We didn’t get an upgrade either. We had two rooms - a suite and a twin room. The rooms were immaculately clean, and no staff enter the room when you’re there. You needed to book a time for breakfast each day. The first two breakfast experiences at Cafe Opera were terrible. One queue with served food, clearly understaffed an unprepared. So, for three of us we had to join a long queue to get orange juice. Then join the queue again, wait until everyone in front of us had their toast and condiments served to them, then get to the cereals/yoghurt/fruit/cold meats to be served to us individually. Then we went back - end of one long queue again - to be served cold ore-toasted bread and condiments, swing by baked goods or hot foods. Heaven help you if you forgot to get butter (or were given one small pat only) as it was to the end of the queue. The coeliac was bought safely prepared toast separately, and it was a bit warmer. The second two days were an improvement - which was just as well as the hotel was at capacity. The toast was still cold, but they had changed the setup so we could join four different and much shorter queues. The hot cross buns and croissant were excellent. Choices for coeliacs were extremely limited compared to previous visits - no pancakes or similar. Thanks to Easter we were no disturbed by the renovations, but there were warnings in each room. The rooms have nice views and will respond well to a freshen up. The staff were friendly. They’ll have to fix breakfast - Covid is a poor excuse for the significant decline in the options - as there are new fancier hotels, which we may try next visit in June.

Poor Customer Service 'Because we are busy'

I booked Opera house view room last November for Easter break and 5 days before our flight contacted hotel for possible early access which was noted by them but 3 days before flight room became unavailable due to renovation. So basically they wait till last minute to leave me with no choice to downgrade or cancel no need to mention they charged me full on November. Extremely low level of customer service, 5 star for this hotel is a joke don't waste your time and money.

We stayed on a Sunday night in March 2021 when the hotels in Sydney were offering great deals. Everything about the hotel was fabulous as you would expect from a five star hotel. Just two small gripes, you only get two regular tea bags for the one night stay AND the television does not have free Netflix or small range of Foxtel channels, only free to air channels, compared to most three star motels who offer these for free. 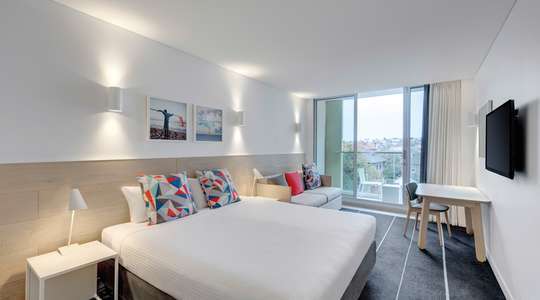 Just minutes from one of Australia's most iconic beaches, the Adina Apartment Hotel has a fantastic location in the lively centre of Bondi Beach. Within walking distance of the famous Bondi Markets, you're also close to many of the area's top restaurants, cafés and trendy bars. The hotel offers an array of self-contained apartments that are ideal for enjoying holidays at a leisurely pace. Great facilities include an expansive swimming pool, hot tub and fitness centre, and each of the 111 apartments has the convenience of a kitchenette and balcony. 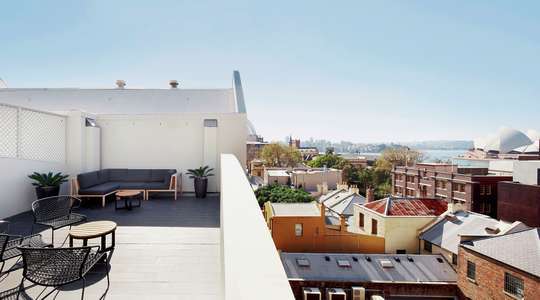 Located in Sydney’s historic Rocks precinct, this fully refurbished boutique hotel whisks you back to a bygone era. The beautiful hotel is steeped in history – built by 12 convict carpenters and 16 hired men on the site of Sydney’s first hospital. Dine in the Tayim Restaurant and sample local and imported wines and beers in Eric's Wine Bar. 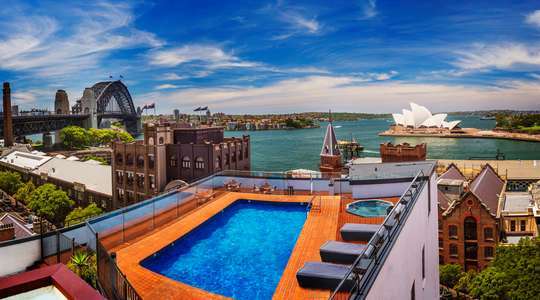 Rydges Sydney Harbour is arguably Sydney’s best located hotel, right in the heart of the Rocks between the Harbour Bridge and the Opera House. It’s just a short stroll along the harbourfront promenade from Circular Quay and close to Sydney’s many restaurants and attractions. The hotel’s rooftop pool has unobstructed views of the Harbour, Opera House and Harbour Bridge. There’s also a relaxed breakfast room and a lobby lounge bar. 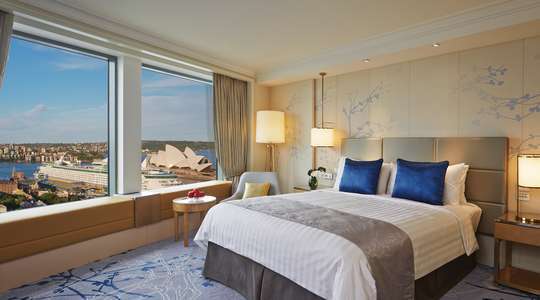 Modern décor, incredible views and a central location in the historic Rocks area close to Circular Quay; the Shangri-La Hotel, Sydney has all the ingredients for an excellent Sydney stay. Of course you’ll never struggle for somewhere to dine in Sydney, but if you prefer to eat in the comfort of your hotel there are two restaurants here – and one is award-winning. Altitude is far more than your average hotel eatery, with its floor-to-ceiling windows, harbour views and contemporary Australian cuisine. Follow a meal here with drinks at the exclusive New York-inspired Blu Bar on 36, serving cocktails high above the city. To unwind after days spent wandering around Sydney’s attractions, CHI: The Spa offers treatments based on authentic Asian natural healing methods and also uses indigenous Australian ingredients. The Shangri-La has some of the biggest rooms in the city. All have wonderful views, either of Darling Harbour (also with the best sunsets), Sydney Harbour or the Opera House and city. There are suites if you need even more space, and Horizon Club rooms on higher floors that include access to the 30th floor Club Lounge with free breakfast, afternoon tea, and evening drinks and canapés. 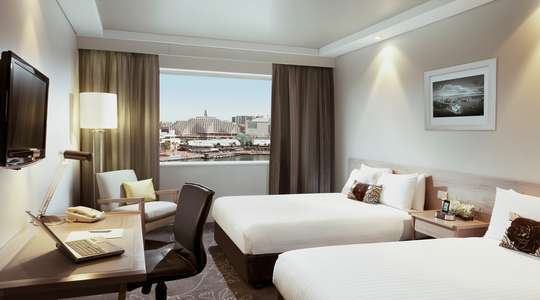 On the foreshore of Darling Harbour with direct access by a footbridge, the popular Parkroyal is just a short walk from Darling Harbour’s Harbourside complex, Sydney Aquarium and waterfront restaurants at King Street Wharf, as well as Chinatown and Sydney’s CBD. After a day’s shopping or sightseeing, the hotel’s modern restaurant and cocktail lounge provide a great place to relax. Contemporary rooms have cityscape or Darling Harbour views. 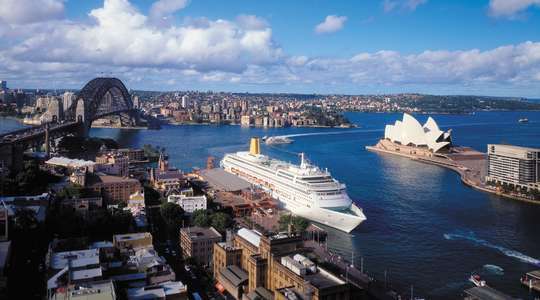 The three-level atrium-style lobby sets the tone here: sophisticated yet welcoming. The Four Seasons is all-round luxurious; not only in its décor and signature service, but also in its location – ideally placed between the cobblestone lanes of The Rocks, the wharves of Circular Quay and Sydney’s vibrant CBD. Mode Kitchen & Bar, the hotel's modern Australian restaurant focuses on seasonal local produce, while The Cabana sits poolside for daytime snacks. Grain is one of the hotel’s highlights – a decadent bar with craft beers, organic wines and an impressive 200-strong whisky list. The whisky flight is an affordable way to sample a few varieties of the vast range. To unwind after days spent exploring Sydney’s iconic sights, there’s a heated outdoor pool with a separate whirlpool, plus a spa that offers a range of all-Australian treatments. Spacious and sophisticated rooms have marble bathrooms with deep bathtubs, and views of the city or harbour. The top floors are reserved for Club Rooms and Suites. Guests in these rooms have exclusive access to the plush Lounge 32, where breakfast and evening canapés are included and there are stunning views over Walsh Bay. 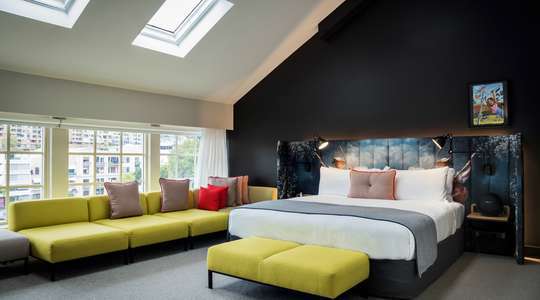 Overlooking Sydney’s iconic skyline, Ovolo Woolloomooloo is a luxury base with a 100-year industrial heritage and a modern, playful design. This decor at this eclectic hotel is striking, with dramatic high ceilings, exposed beams and fairy light-strung indoor trees. Each room has been stylishly designed, continuing the hotel’s playful theme of bright colours and quirky lighting. At the top end, stay in the Ultraroo Loft, which has a unique ‘Rock ‘n’ Roll’ theme and an upstairs king-size bed that overlooks the city. The hotel also has a free 24-hour indoor pool and gym, outside cabanas and the Alibi Bar & Restaurant, where guests socialise and wind down in the evening. Located in the heart of Sydney, stretching out along the historic Woolloomooloo Wharf (also known as Finger Wharf), it’s just a ten-minute stroll from the Royal Botanical Gardens and Sydney Opera House. The Woolloomooloo Wharf comes to life in the evening and is a hotspot for some of the city’s most stylish bars and restaurants.