I booked a one bedroom apartment for a weeks stay at Lakes Entrance. One arrival the check-in was very quick and easy and undercover parking was readily available. The apartment itself was really clean and modern. It had a well equipped kitchen, WIFI, queen bed in a seperate room and a nice balcony to sit out and enjoy the view from. Although I didn't use them the indoor/outdoor pools and tennis courts looked very good. The location is excellent. It's only a short walk to the main shops along the Esplanade in Lakes Entrance. Overall I couldn't fault anything with my stay and I wouldn't hesitate in booking again. I would highly recommend The Esplanade Resort to anyone looking for a place to stay in Lakes.

Guest room was said to be size of motel room, but it was smaller

I knew we were booking only a motel room style room, called A Guest Room and paid $189, but expected more as it is a resort. Well we walked in, and it was smaller than a motel room, no bench space, so clothing went on the floor under a tv that was wall mounted with a dvd player on it, so unprofessional, like an add on," oh yeah we should put a tv in there". There was one arm chair in the room, one, like ok I can sit on that, where does hubby sit and watch tv. Really, come on, he had to sit on the bed. Then go into a really nice bathroom, seriously, the bathroom was nice and shower was high and good, but sit on the loo and the toilet roll holder is pushed into your arm as it's really tight in that space. One good thing, the bed was comfortable at least. Thought I'd have a cuppa, and grab the milk out of the fridge, and it's not cold, so I check the switch but it didn't even sound like it was on, so had a look behind the fridge and guess what, the power wasn't even on, so fridge was not on. Really! Anyway I make a cuppa, and no complimentary biscuits, really, $189 for what, not even a biscuit. And no goodies in the fridge to eat (buy) or drink. Just an empty warm fridge with a little bit of milk. I always like to read the information they leave in rooms, to see what's happening, where to visit, rules of the place, anything. Nothing. There was nothing. Even at reception, they just gave me the key cards, showed me on the card where to go and park the car and to go into the lift to our room, that's it, not even any explanation about the place, nothing. What's available, what's not, especially at this time. So we come down for tea, only 10 allowed in. Not their fault, but they allowed people off the street in for a meal, and we had a room there, couldn't book a table, and so we didn't get a meal. We tried twice to get in. In the morning, couldn't get breakfast as 10 in also. Why couldn't they look after their own guests, and book table seating times. We weren't the only ones. There was another couple who missed out too. I was livid. Had a crap time there. Would not recommend it to anyone. $189 was an absolute rip off. Even made me have a restless sleep, even though the bed was good. Especially when you think you are going to something you expect to be a little more than a motel, since it is a resort. It's not a resort either, believe me. Can't even lavish the guests a little. This lot don't know how to do that, sorry. Thought we'd go to East Gippsland for a weekend away, and it was very very disappointing.

We had a lovely break at The Esplanade resort and spa. The rooms were very spacious, clean and modern. The kitchen was very well equipped with everything needed to prepare meals. The king size bed was very comfy and the heater/aircon was very efficient. We had several meals from the inhouse restaurant which were excellent .

We stayed in a deluxe 2 bedroom room on the 5th floor, great views and the room was spacious and comfortable. The customer service from the reception staff to the cafe staff was amazing. We were disappointed however at some of the businesses in lakes entrance not being open despite being allowed to under regional COVID regs. Our intention was to holiday locally and spend some money in a town that has suffered from fires and COVID yet was unable to eat or shop.

OK Stay - but paper thin walls, a tired apartment that reeked of fish

We booked a 2 bed apartment which consisted of a 1 bed with kitchen & lounge then a small hallway with a separate 1 bedded room. Pro's: The hotel is across the road from the beach which is handy, it is a 25 min walk to town. Fine if you are mobile as its a nice walk, otherwise you will need a car. Has a restaurant onsite and we received a text on arrival for a $20 discount which is a good way to get guests to eat on-site. See comments below re meals. Cons: Unfortunately on arrival, we were hit with an overwhelming stink of fish like you would smell in a fish market. Hunted through the kitchen to try & find anything which turned up nothing, but the smell was still obvious several days later - only dulled by our opening everything up whenever we were in the apartment. The split system is right over the open kitchen, so either smells from previous guests had been sucked in there or the split system filters desperately needed cleaning- it was awful. Have since seen there is another review which noted the same problem months ago. The apartment itself was very tired - holes burnt into the benchtop that looked old, sides of kitchen cabinet broken & sticking out, the shower wasnt very clean, glassware with dirty smears on them etc. The walls are also Paper thin - we could hear our neighbours clearly- one side were quiet but every footstep and tap turning on audible and the other side had small children who were very vocal at 5:30am and our guest said it was like they were in the bedroom.The bed base in one room squeaked loudly with every single movement - if there were 2 people in it, it would have been a real pain. The balcony outside our bedroom window had 2 air con units on it and we discovered one of them was for the apartment next door. So when they had theirs turned on in their unit, it sounded like there was a car parked outside our window running its motor. (this would also be very hot in summer with the vents blowing hot air on your balcony if you wanted to sit out there). Note no cleaning provided for a 3 day stay. (Thats ok, but no info provided about this until we asked on day 2. We were told by an indifferent reception staff member that it should have been on our booking confirmation, but we checked and there was nothing). Restaurant - the food we had over two nights, 4 of the 6 meals were incredibly salty - one to the point it was inedible, it was so soaked in a soy sauce . A few adjustments would make a difference- think the chef must like salt a lot. Overall - there were just too many things that pointed to tired rooms that desperately need some attention. Wish there were more positives but the rooms condition really reflect on peoples stays. Wouldnt return or recommend to friends. 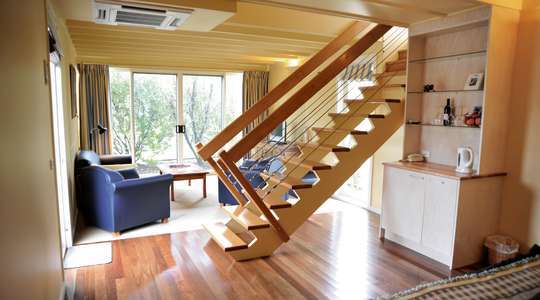 Captains at the Bay, Apollo Bay 4.5

Captains at the Bay, Apollo Bay

Close to the pretty sandy beach of Apollo Bay, Captains at the Bay is a boutique hotel that makes for a fabulous stop along Victoria’s spectacular Great Ocean Road, just an hour and a half from the Twelve Apostles. Apollo Bay is a quaint seaside town, located at the foothills of the  Otways and surrounded by some of the routes most magnificent coastal scenery. 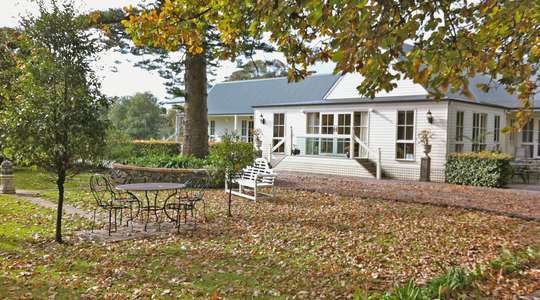 Set in two acres of heritage gardens, this boutique country house is the perfect secluded retreat within a stone's throw from a sublime sandy beach. It's a historic homestead owned and run by a family, with personal touches and a nostalgic design that make it instantly welcoming. An ideal base for exploring the local flora and fauna in the Phillip Island Nature Park, each fully air-conditioned room has an en suite bathroom, and tea and coffee making facilities. 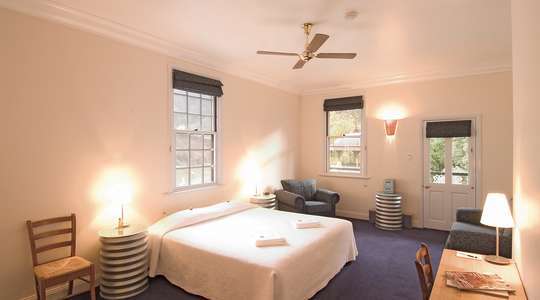 A quaint and cosy mountain retreat on the Sydney to Melbourne route, Walhalla’s Star Hotel’s main draw is its nostalgic character. Without a single television in sight and limited Wi-Fi connectivity in this rural setting, it really is a chance to escape modern life for a few days. There are 12 rooms, each named after some of the local gold mines that propelled the town into prosperity 150 years ago. The high-ceilinged rooms are gracefully infused with the country charm that is found across the whole property. Browse through the books in the library and immerse yourself in this slower pace of life. The town, home to around just 20 residents, is rich with wonderfully preserved heritage buildings. Tour the gold mine or go hiking in the mountains for a nature-led stay, before settling down in a homely armchair in the lounge with a drink from the honesty bar. 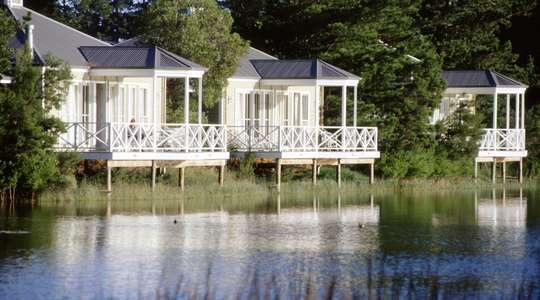 Just an hour’s drive from Melbourne sits this picturesque lake retreat in the form of a charming Victorian manor house. A total of only ten rooms creates a serene atmosphere for guests, with six of the rooms overlooking the lake. Lakeside Chalets offer complete privacy – there’s a lounge and dining area where you can enjoy breakfast delivered to your door, a two-person spa bath and double vanity in the en-suite bathroom. The private deck juts out over the water, giving you the best seats in the house. Enjoy high tea, a popular tradition at Woodman Estate, with sandwiches and scones served with the resort’s own award-winning jams and preserves. Guests driving to and from the hotel can also explore the rest of the peninsula and its greatest offering: local food and drink. The Mornington Peninsula’s vineyards are some of the best in the country for Pinot Noir and with over 50 wineries with cellar doors, you can try several varieties. Stop by cafés selling artisanal food or one of the area’s five Chef’s Hats restaurant, or pick your own cherries (mid-November to mid-January) and strawberries (November to April) on a local farm (at extra cost).