A luxurious hotel in a cosmopolitan corner of Jerusalem, with easy access to the city’s key sites.

Orient Jerusalem is in the German Colony, a quaint district south of the Old City. The area was established in 1868 by German settlers and is known for its series of 19th-Century Templar buildings – Isrotel has made every effort to ensure the hotel blends in, with a pair of beautifully restored heritage residences at the entrance whose ornate stonework and immaculate terracotta roofs match the neighbourhood’s attractive architecture. The hotel is a little further out from the Old City but still only a 20-minute walk to the Jaffa and Zion Gates, and it’s easy to stop off at sites including King David’s Tomb en route.

This handy location means you can explore some lesser known parts of Jerusalem. Round the corner you’ll find colourful markets and stalls at The First Station, while the leafy Liberty Bell Park and historic Mishkenot Sha'ananim – Jerusalem’s first Jewish settlement outside the Old City – are both a leisurely stroll away. The German Colony’s main street is now a hub for places to eat and drink; back at the hotel, tuck into breakfast spreads in the dining room’s courtyard, and enjoy à la carte service among plush seating and modern chandeliers at the dairy-focused Khan Restaurant. There’s also a spa and rooftop infinity pool.

The standard Orient Rooms are contemporary in style and generous in size, with light interiors and a bathroom with separate bathtub and shower – they’re also available with views over the German Colony or Old City. Colony Rooms in the Templar buildings have high ceilings, painted floor tiles, arched windows and bespoke vintage furniture, as well as extras including a tour of Jerusalem and access to the 8th-floor business lounge.

Near the heart of Jerusalem’s German Colony neighbourhood, a 10-minute taxi ride from the Old City

• Indulge in one of Isrotel’s renowned Carmel Forest Spa treatments at the on-site spa* • Take a 10-minute walk north to Mishkenot Sha’ananim, the first Jewish settlement built outside the walls of the Old City on a hill near Mount Zion • Visit the historic First Station, Jerusalem’s former railway station which has since been converted into a popular cultural spot full of shops, markets and restaurants.

Breakfast in the dining room. 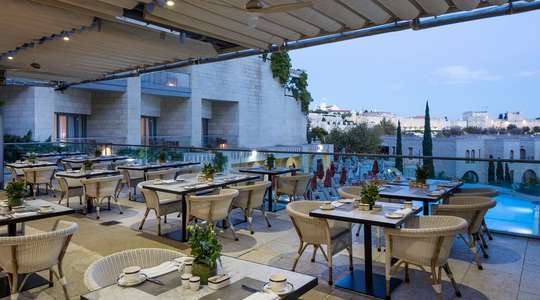 David Citadel is one of the most well-known hotels in Jerusalem – it’s built from local limestone in the shape of a horseshoe with an open courtyard at its centre, home to a large pool with views over the walls of the Old City. The grand interior, courtesy of Piero Lissoni, includes a lobby with an innovative beamed ceiling in the shape of a sunrise and stained glass-style arched doors, as well as a glass roof which lets loads of light into the lounge next door. The building is the work of Moshe Safdie, the Israeli-Canadian architect famous for designing the experimental and internationally acclaimed Habitat 67 complex in Montréal. Tuck into robust buffet breakfasts at Seasons Restaurant, enjoy regionally inspired vegetables, meat, fish and skewers at Scala and work your way through the Sushi Bar menu, with creative concoctions including crispy vegetable futomaki and sushi orange soy leaves. If you’re celebrating a special occasion then we’d recommend a trip up to the hotel’s exclusive terrace – it overlooks the Tower of David, with glass-fronted balconies to maximise views over the surrounding architecture. There’s also a feng shui-focused spa, which is warmly lit and offers a range of deep tissue massages comprising Balinese, Chinese and Swedish techniques. The rooms here are very spacious and tastefully furnished, with glossy wooden desks and tables, oak parquet flooring, intricate panelling and white marble bathrooms. Upgrade to an Alcove Deluxe Old City View Room, for your own small private balcony and direct views over the Old City. 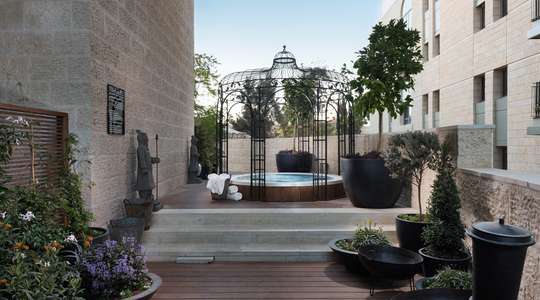 Leonardo Boutique Hotel Jerusalem is a great base for exploring this fascinating Israeli city. This is an understated hotel but one with some really neat touches, from the elegant glass wine cabinet in the lobby to the creative framed wall mural and decorative rugs in the entrance hall. Next to the hall you’ll find the Restaurant, with kaleidoscopic-style wallpaper and plenty of places to sit. It serves a generous buffet breakfast, and is overseen on the weekends by renowned Israeli chef Shalom Kadosh, who has cooked for heads of state including Barack Obama. The famous Jaffa Road, intersected by the Jerusalem Light Rail and lined with more restaurants, is only a short stroll away. The main advantage of a stay here though is the close proximity to the walls of the Old City – 10 minutes’ walk to The New Gate or five minutes further to Jaffa Gate. Pass through either gate and you’re just steps from key sites including the Church of the Holy Sepulchre, Western Wall and Temple Mount. The hotel is a welcome retreat at the end of a busy day’s sightseeing – settle down in front of the wide-screen TV in the cosy library, or head outside if the weather’s good. There’s a decked garden area with a few loungers and a lovely walled terrace with a hot tub, framed by a series of shrubs potted and dotted along either side. Rooms are simple but stylish  ̶  they all come with sleek floors and black furnishings, a private balcony and amenities including a Nespresso coffee machine and flat-screen TV. Upgrade to an Executive Garden Room with Hot Tub for a little extra indulgence, a Studio Room if you’re travelling as a family or a more spacious Suite with separate living room. 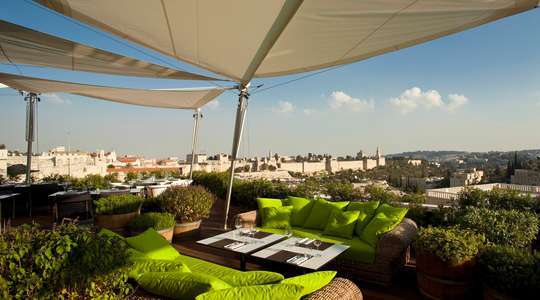 This sleek hotel was voted one of the best in the Middle East at the Condé Nast Traveler Readers' Choice Awards 2018, and it has a prime Jerusalem location – just a five-minute stroll from the Old City, overlooking hot spots including the Tower of David and Jaffa Gate, and only 15 minutes to the Western Wall and Dome of the Rock. A stone’s throw across the road you’ll find the upscale and open-air Alrov Mamilla Avenue, lined with 140 shops, restaurants and cafés, and the hotel’s interior is just as swish – Italian designer Piero Lissoni has blended refined glass, wood and white finishes with natural limestone reminiscent of Jerusalem’s warm, sandy colours. Set yourself up for a day of exploring with a typically eclectic and hearty Israeli breakfast in the Dining Room, whipped up on live cooking stations and accompanied by pretty patio views. The Happy Fish Restaurant does excellent seafood and has chic porcelain-tile décor plus an outdoor terrace, and we recommend spending some time at the Rooftop Restaurant and bar area where you can enjoy laid-back al fresco dining on cushioned wicker sofas as you watch the sun set over the spires and battlements of the Old City. There’s also a basement swimming pool, separate hammams for men and women at the Akasha Spa and a sun deck. The superbly designed rooms are spacious and modern without being too sterile, and well lit thanks to large windows. Stylish touches include bespoke art and lamps, hand-made woodwork, luxurious Frette linens and colourful throws on the large beds. Upgrade from a city-view Studio Room to a slightly larger Executive Room or an elegant Mamilla Suite – Suites have a separate living room with a sliding panel wall and a walk-in closet. 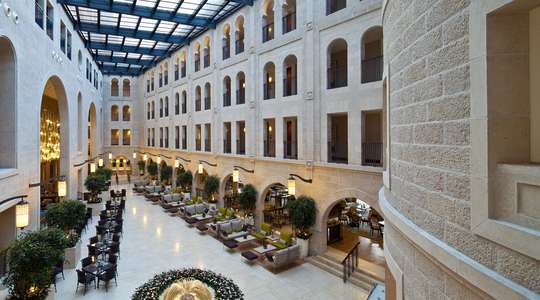 Waldorf Astoria’s first and only foray into Israel is a landmark property in Jerusalem, a 21st-Century reimagination of the city’s original Palace Hotel on Agron Street. The building is still suitably palatial – from the carefully restored façade to the ornate arches and pillars – and based around a superb Jerusalem-stone atrium with a retractable glass roof. The signature Waldorf Astoria grandfather clock in the lobby enhances the air of extravagance. The hotel is down the road from the glitzy Alrov Mamilla Avenue shops, a handy stop during the 10-minute walk to Jaffa Gate and the walls of the Old City. A pair of kosher restaurants are tucked either side of the atrium. The Palace Restaurant serves buffet breakfast and dinner, with decadent dishes including chargrilled rib-eye medallions and caramelised duck breast; King’s Court hosts Afternoon Tea and offers favourites ranging from red mullet and labneh salad to fresh pesto fettuccini for lunch and dinner. The fourth-floor Garden Terrace is a popular spot in summer, dotted with neat hedges and cute café tables – head up here to check out the Israeli-inspired tapas menu and sip G&Ts in the open air. In true Waldorf fashion you can expect superb service here, with staff on hand to help you plan day trips to the Old City and give you hints and tips if you’re new to Jerusalem. Each of the rooms has a stately but warm décor, chandelier and luxurious bathroom – think Italian marble, elegant free-standing bathtubs and TVs embedded in the mirrors.